USD/CAD has declined considerably in the last few days. It has fallen from below 1.30 earlier in the week, to above 1.27, so this means almost 300 pips less. Oil prices have trembled and lost $3 on Tuesday as Donald Trump ripped apart the Iran deal. But, Oil prices recuperated quickly and they are trading above $71.

This has helped the Canadian Dollar, as well as the recent pullback in the USD. USD/CAD lost nearly 300 pips during this time, but the miss in the employment numbers today might change the situation. In fact, a reverse is beginning in this forex pair.

The Canadian employment report was just released a while ago and it wasn’t what the CAD bulls were expecting, nor the USD/CAD bears. The unemployment rate remained unchanged at 5.8%, which is still a bit high compared to the southern neighbors.

But, the employment change came out negatively. New jobs picked up by 32k last month while this month they were expected at around 18k. Well, new jobs declined by 1.1k this time, but that wasn’t the whole story. The full-time jobs grey by nearly 29k while wages which are even more important, came out at 3.3%, up from 3.1% previously. 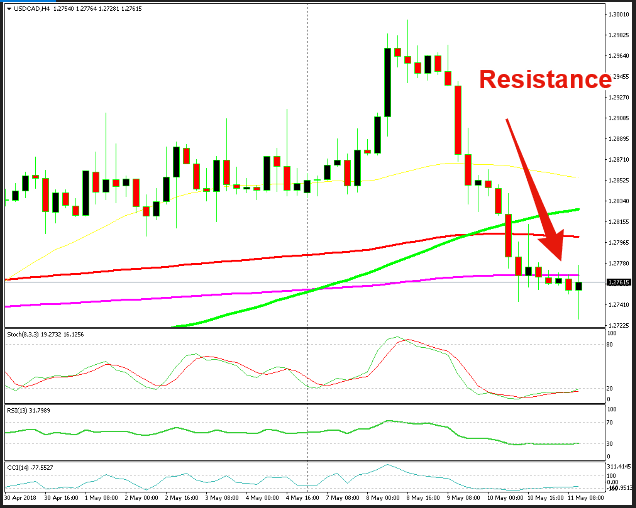 The h4 chart has already formed a bullish candlestick

Nonetheless, USD/CAD traders took the headline number and ran off with it. This forex pair jumped 50 pips higher after the employment report was released and it is forming a bullish reversal pattern now. The H4 candlestick in USD/CAD looks like a doji now and the price is trying to break above the 200 SMA (purple). If that happens, then a decent pullback or even a possible reversal higher is on the cards.