Crude oil prices are under pressure since the OPEC (Organization of Petroleum Exporting Countries) is thinking of increasing the output in order to deal with the potential shortage from Iran. Taking the benefit, our forex trading signal managed to get us 30 green pips. The next trade is likely to be in the U.S. session, but we need to mind three things before the trade. Check it out..

First – The EIA report is coming out at 14:30 (GMT) and that will be a deal maker today. On Tuesday, the API reported a draw of 2.02 million barrels in inventories and today economists are expecting the same from EIA. There’s a positive correlation between these two figures, so we can expect a draw of around 2M but it is going to be exciting to trade the divergence.

Let’s say, a draw of up to 5 Million can drive 80-100 pips buying in the crude oil. Whereas, the build of 3-5 Million will give us a chance to short the WTI.

Secondly, the OPEC members will be meeting on June 22 to determine the crude oil output. Until then the oil prices are likely to remain under pressure. 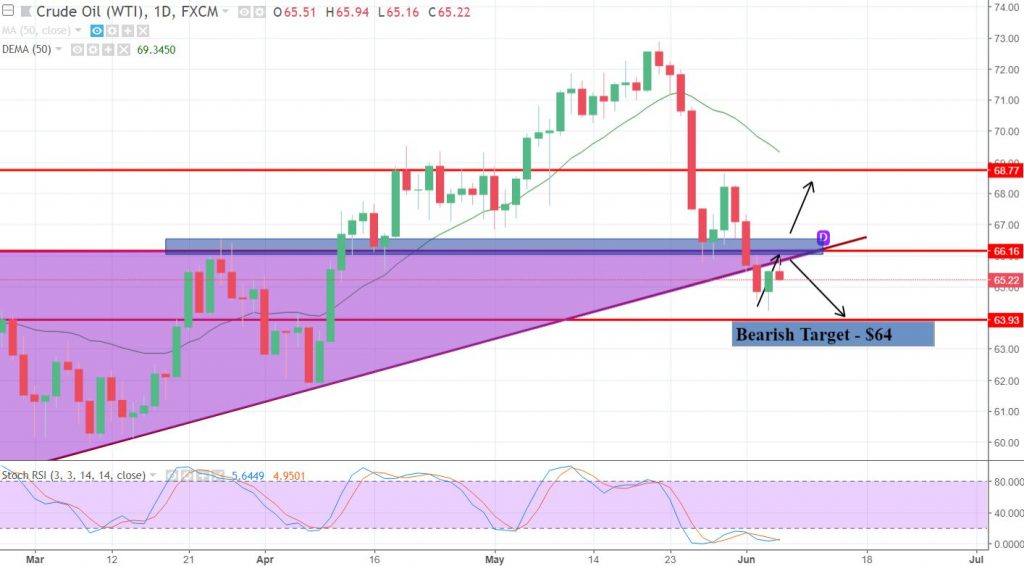 Thirdly, crude oil prices have reached below a solid resistance zone of 65.85 and that’s where we enter a forex trading signal to short the oil. The bullish trendline which was violated during the previous week is now working at a resistance of $66.

Bellow $66, crude oil has a chance to go after $64, but again the price action will highly depend upon the EIA report later today during the U.S. session.