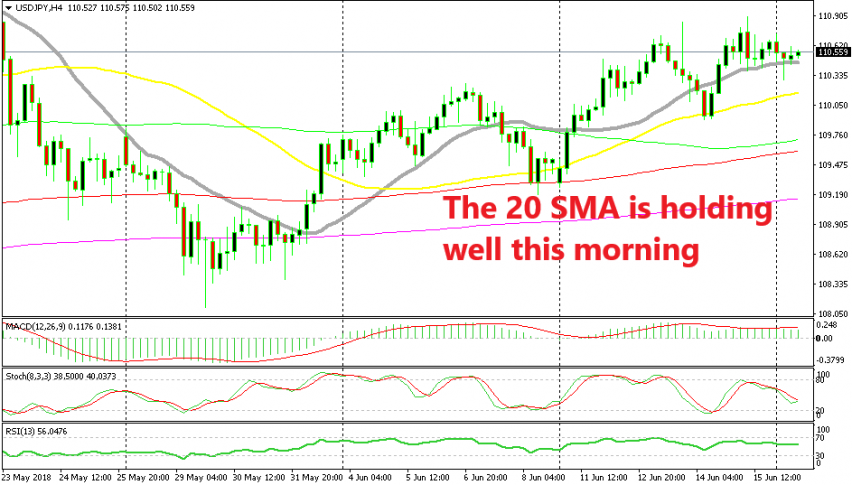 The 20 SMA is Keeping USD/JPY Afloat

Last week we opened a buy forex signal in USD/JPY. This forex pair has been on an uptrend for two weeks and it was recovering after it dipped to the 50 SMA (yellow) on the H4 chart. It made some new highs on Friday morning, reaching 110.90 and then it started retracing lower again.

But the 20 SMA (grey) held the ground all afternoon so we decided to go long based on that moving average. This morning, USD/JPY lost around 40 pips again as the market sentiment turned slightly dovish.

The new tariffs by the White House on China and the retaliation measures that China is taking have turned the sentiment negative. As a result, safe havens are enjoying some nice bids this morning while the risk currencies are losing ground. The indexes are sliding lower as well after the bearish day on Friday.

So, USD/JPY slipped lower this morning. But the 20 SMA did a good job once again. It was pierced during the first hours of the morning, but the H4 candlestick closed above the 20 SMA so it didn’t count as a break. Now the price is above this moving average and the stochastic indicator is almost oversold and turning up.

There is a strong chance that USD/JPY moves higher now, but the market sentiment has to improve to, otherwise the run for safe havens will resume again.

A proper kindly of research is very necessary before selecting the broker also we should keep in mind that reviews should not be trusted blindly, there should be someone who is from our friend circle who have worked with that broker