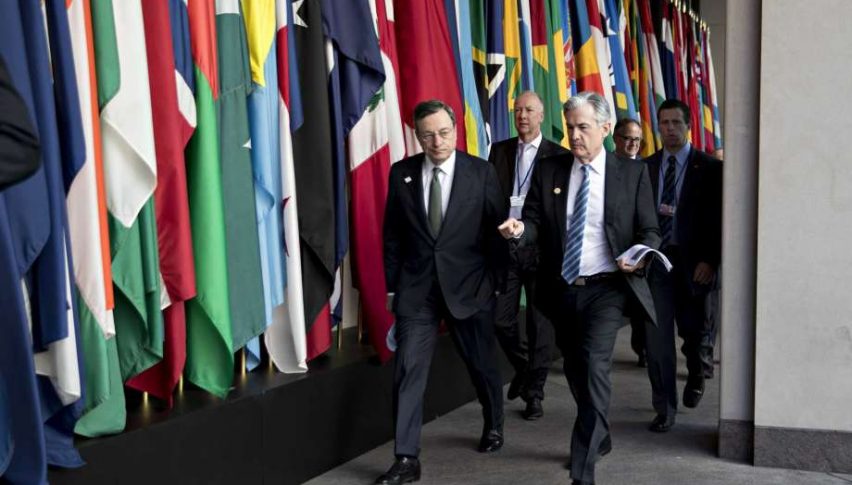 The big boys are meeting in Portugal but will they speak about money?

The main events for financial markets today are the OPEC meeting and the European Central Bank forum. The OPEC+ meeting includes other oil producing countries which aren’t part of OPEC, and it is being held in Vienna as always.

Some major OPEC members such as Russia and Saudi Arabia want to increase the Oil output, but the catch here is that other Oil producing countries with sanctions on them such as Iran and Venezuela want to keep the current output levels. As I mentioned yesterday, they can’t export more even if they increase production.

That should be positive for crude Oil at first glance. But the problem is that the countries that want to increase the output might go their own way and do so without a consensus, hence the volatility in Oil prices recently. The other main event is the meeting of central bankers that is taking place in Portugal. Many major central bankers are holding speeches, although they might not touch the monetary policy at all, so we have to keep an eye out for them.

German PPI MoM – Producer price index (PPI) is not the main inflation measure like the CPI, but it is an indicator nonetheless. It shows the trend of producer prices which will likely be passed on to the consumer when the goods are produced and then sold. It was expected at 0.4% but came at 0.5%, same as last month. This is the second month of solid gains, so inflation is looking good in Europe.

UK CBI Industrial Expectations – Last month, this index came at -3 points, which means that expectations were negative. This month was expected at 1 point, but jumped to 13 points. This means that manufacturers are expecting the industrial orders and production to pick up considerably. That’s positive, considering the UK data hasn’t been that good this year.

The Trade Was Escalates Further – Yesterday, China responded to the latest US tariffs on Chinese products which will be worth around $100 or $200 billion – who knows where this will end. They said they don’t want trade wars but are not afraid to fight back. Today the EU announced tariffs on US products worth 2.8 billion Euros. It’s not much but it’s the beginning.

OPEC – The OPEC secretary general Barkindo said a while ago that he is confident that a deal on Oil production increase will be reached on Friday. On the other hand, Iran’s OPEC governor said that OPEC+ should stick to the existing deal for the rest of 2018. So, no deal then, right?

The Market Sentiment – The sentiment has been really negative in the last several days as the trade war escalates. Although, today it seems as the sentiment has improved somewhat. The safe haven currencies are declining and as a result, USD/JPY and EUR/CHF are climbing higher.

US Trade Balance – The US trade balance came at -$128 billion last month and this month the deficit was expected to grow to $129 billion. It shrank to -$124 billion instead. Probably, Trump’s trade tariffs are already showing its effects.

Central Bankers Speak – Today we have the RBA governor Lowe, the BOJ governor Kuroda, the ECB president Draghi and the FED chairman Powell speaking in Lisbon at the conference. As I mentioned above, we don’t know if they will touch the monetary policy because the forum is on central banking in general. But I heard today that the ECB is really worried about the trade war, so they might touch this subject instead.

US Existing Home Sales – The sales of existing houses declined last month to 5.46 million. This month, they are expected to increase to 5.52 billion. That would bring this indicator back to normal levels and make last month’s decline an odd occurrence since home sales have been in the 5.50-6.0 million region the whole year so far.

US Crude Oil Inventories – The US Oil inventories are expected to decline by 2.1 billion barrels this week. Last week, inventories fell by 4.1 million, so if we see another negative number today, it will have a positive impact on the CAD, which is getting beaten up on OPEC comments.

New Zealand GDP QoQ – The GDP is expected to have grown by 0.5% in Q1. Looking at the history since the beginning of 2017, the GDP has missed expectations almost every time, so it won’t be a surprise if today’s number disappoints again. 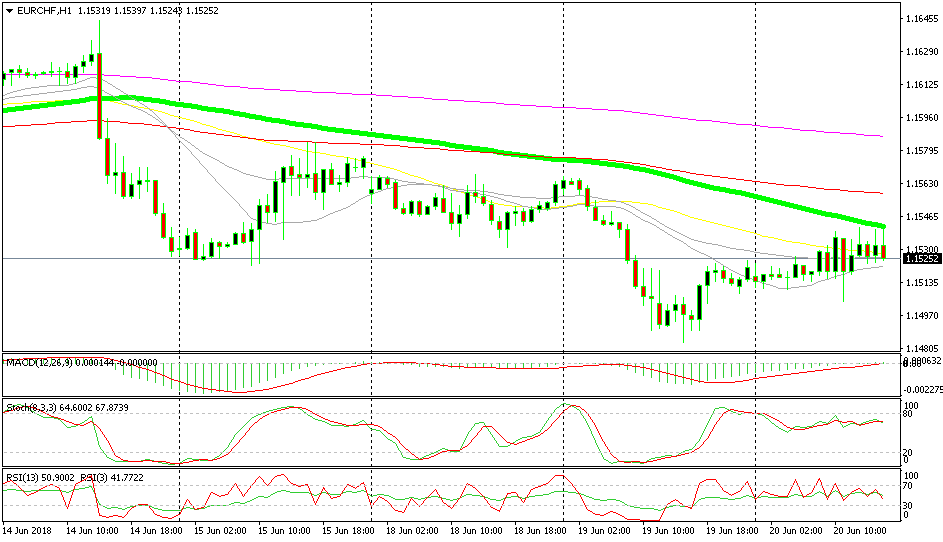 The reverse down has already started

EUR/CHF has pulled back higher today as the sentiment has improved a bit. Although, the market sentiment still remains bearish in general so I expect this pair to reverse down now. The retrace up is complete as stochastic shows and the 100 SMA is providing resistance. We have a sell signal in USD/JPY, which is correlated to EUR/CHF, so we might not take this opportunity, but it is a good chance for those traders who have free capital on their accounts.

Oil prices continue to be volatile today as the OPEC meeting gets underway. We’re hearing all sorts of comments from officials, so no one knows what will be decided. The CAD is getting battered though, despite Oil recovering considerable terrain today.

Crude Oil Tumbles Toward $110, AS Recession Fears Increase
6 days ago