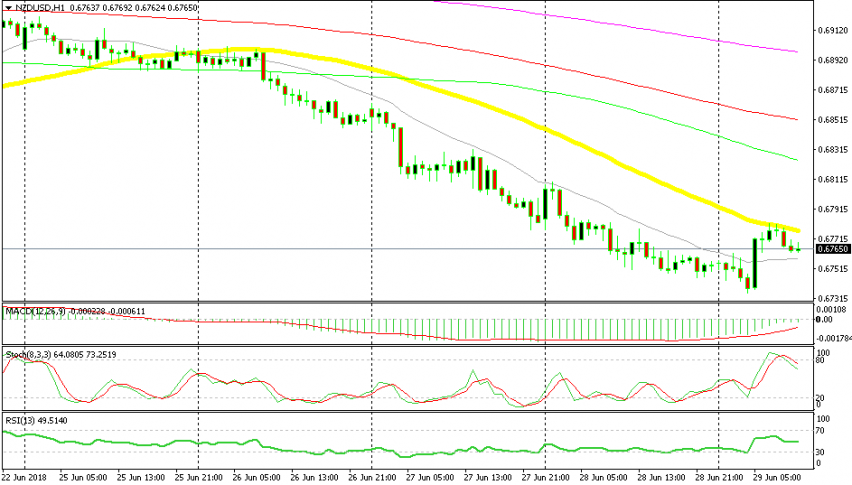 Shorting NZD/USD Again After the Jump

This morning we saw some mixed economic numbers from the Eurozone. German retail sales took a dive as they declined by 2.1%, although this is a volatile report. Last month retail sales grew by 2.3% in Germany, which was revised lower to 1.6% this month.

The import prices grew by 1.6% in Germany while the unemployment declined by 15K. Another positive number from Europe was the French consumer spending which grew by 0.9%, beating expectations.

Although, the jump in EUR/USD happened earlier in the morning. The sellers got discouraged once again after failing to break the support at 1.1520s, so it seems like they have reversed their trades this morning from short to long.

The jump in the Euro pairs cause other risk currencies such as the AUD and the NZD to pull up too. The commodity Dollars have been on a strong bearish trend this week and we have had quite a few winning forex signals shorting them.

So, this latest jump in NZD/USD is a good opportunity to open another trade here. The 20 SMA (grey) has been pushing NZD/USD lower this week, although today that moving average was broken. But, there is the 50 SMA (yellow) which is providing solid resistance on top. The buyers have tried to push above it a few times but have failed. The stochastic is also overbought so the pullback is complete. Now let’s sit back and wait for another winning trade