Forex Signals US Session Brief, July 3 – One of Few Good Days for the GBP As Economic Data Improves in UK - Forex News by FX Leaders 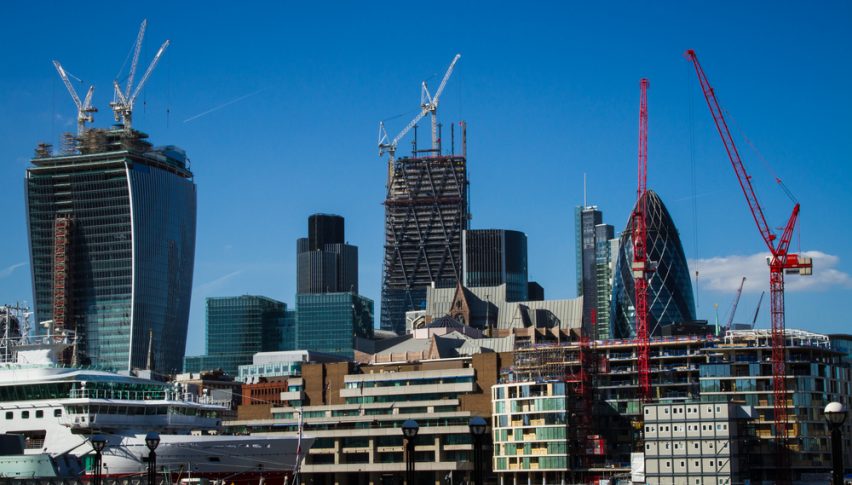 Forex Signals US Session Brief, July 3 – One of Few Good Days for the GBP As Economic Data Improves in UK

The UK construction sector posted some decent numbers at last

Financial markets have been relatively quiet in the European session and they are expected to get even quieter as we head into the US session. Remember that tomorrow is the 4th of July, which is a national holiday in the US, so many traders have already left their desks.

Although, we have had some nice price action in GBP pairs. The GBP has been on a strong bearish trend as the economic data has deteriorated this year. But yesterday, the manufacturing figures showed that this sector remains in decent shape and today the construction PMI report turned positive as well. Besides that, we heard some hawkish comments from Bank of England (BOE) members. As a result, the GBP has climbed around 90 pips from the lows.

UK Construction PMI – The UK construction PMI report was expected at 52.6 points, similar to last month, but came at 53.1 points. This is a positive turnaround after the decline that we saw in April. Perhaps the winter weather had some effect on construction after all.

Eurozone PPI – The Eurozone producer price index came at 0.8% against 0.4% expected. This indicator has been at 0.1%-0.2% the entire year, so this is such a big number today. It remains to be seen whether it will translate into better consumer inflation (CPI) later in the year.

Eurozone Retail Sales – Retail sales have been pretty weak in Europe this year. They have been growing by 0.1% or haven’t grown at all. This month retail sales were flat again as the actual number came at 0.0%. So, the economic slowdown continues.

BOE’s Saunders Turns Hawkish – The BOE member Saunders said this morning that the softening economy in the UK has been largely affected by bad weather. He added that the BOE might have to raise interest rates faster than expected. Those comments sent the GBP higher but I don’t think there will be any rate hikes anytime soon.

Trump Says North Korea Is on the Right Path – Donald Trump tweeted that the talks with North Korea are going great and thanks to him the world is safer. Well, he has been doing a good job on the North Korea issue, too bad he is going the other way with Iran. Although, North Korea is not yet denuclearized so perhaps the round ball that is the NK supreme leader might be trying to play tricks.

PBOC Denies Currency Intervention – The Yuan has been weakening in recent weeks as Trump introduced tariffs. But, the People’s Bank of China denies any interventions. They said that it is due to market expectations as trade war grows. They might be right, or they might be covering their battle, which is weakening the Yuan to fight Trump’s tariffs back.

EU-UK Relation Details after Brexit to Be Set on Friday – A UK Government spokesperson said that the UK officials will set out a package for the future relationship with the EU. If they don’t reach a consensus, then it is goodbye to the White Paper that PM Theresa May promised for this month.

Saudi Arabia Is Ready to Increase Oil Output – Saudi officials said earlier today that they are ready to use the spare capacity to increase Oil production. This has helped Oil prices as they continue to climb higher today.

US Factory Orders MoM – US factory orders are expected to have grown by 0.1%. Although, this indicator is very volatile so I wouldn’t trust the forecast too much.

GDT Price Index – Today is that time of the month when the Global Dairy trade Auction takes place in New Zealand. Last month, dairy prices fell by 1.2% so that is an increased risk for the NZD. 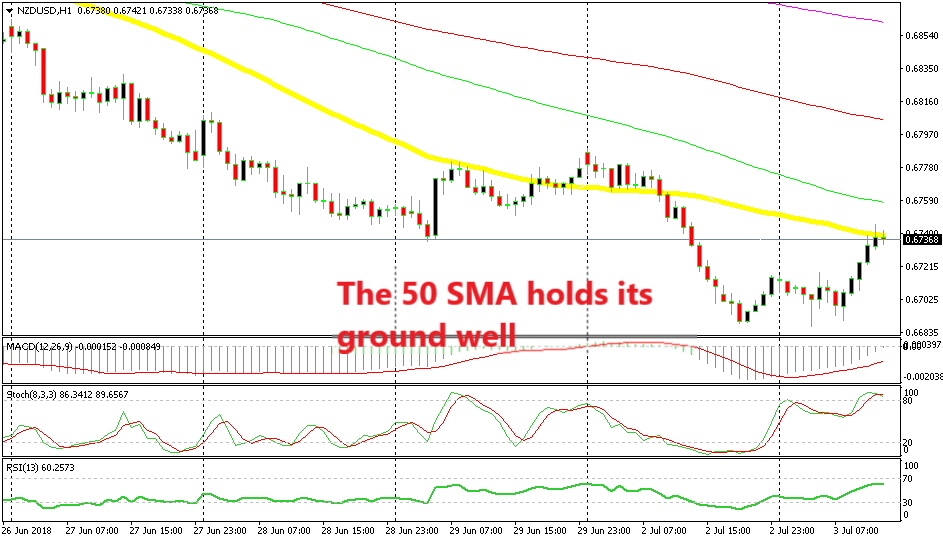 The price seems to be turning bearish at the 50 SMA

The technical analysis looks pretty bearish to me. The downtrend is quite strong and it has picked up pace this week. Although, the price has retraced higher this morning on the back of some USD weakness. But the retrace up seems complete now because the stochastic indicator is overbought. Besides that, the 50 SMA is scaring the buyers away. The GDT auction is another added risk for the NZD and the traders don’t want to get caught on the wrong side by it. So, they are closing their buy trades that they opened this morning. We went short on this pair a while ago and that trade seems to be going well. The upside down hammer is a reversing signal and NZD/USD has already started to reverse lower.

As I mentioned above, I don’t expect much action this evening as the US heads into the 4th of July holiday. But, Trump is tweeting and the NZD is moving, so we will follow the market closely. Maybe the GDT auction will give us a nice bonus later.

Booking Profit on EUR/USD Signal, Despite the Improved Economic Sentiment
6 months ago
Further Signs the US Economy Is Accelerating
ISM services and ADP employment reports showed further expansion in the US economy
6 months ago