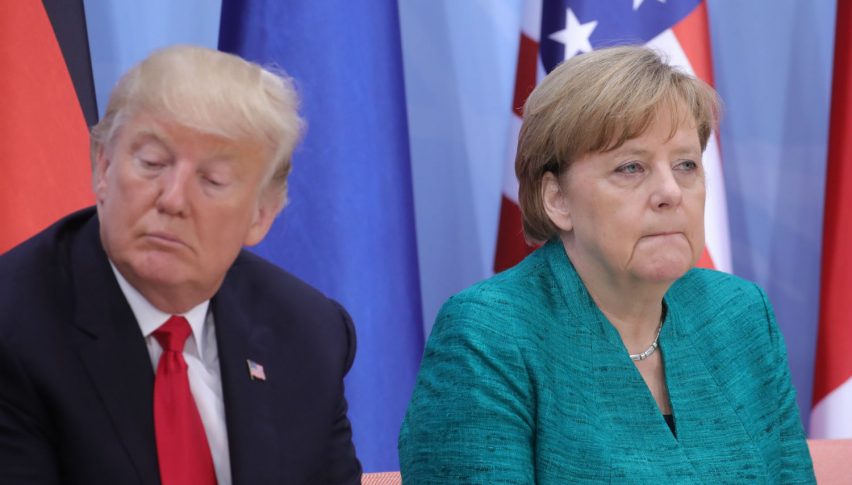 The first step to a healthy relationship is lowering tariffs, not increasing them

The US Independence Day is over but the markets seem to have a hangover from yesterday. The price action looks very similar to yesterday apart from the 50 pip pop this morning. Although, we saw a similar move yesterday in the evening so the market behavior looks very similar. The US traders might extend their Independence Day holiday and turn it into a long weekend, so there is the possibility that the markets turn really quiet in the afternoon, again just like yesterday. But, we have to see the price action when the US session starts.

One thing which differentiates from yesterday is the market sentiment. It feels like the sentiment has improved since the risk assets are climbing while the safe havens are sliding lower. Gold, the JPY and the CHF are all down, while commodity Dollars, the Euro and the GBP are higher. Central bankers from the ECB and the BOE also helped in this with some hawkish comments, so let’s see what they said.

Swiss CPI MoM – Consumer inflation CPI which is the main inflation report was expected at 0.1% but it fell flat at 0%. This turnaround looks pretty bad after CPI has increased by 0.4% in the last three out of four months.

Eurozone Retail PMI – Te retail sector started expanding again in May after contracting in April as this indicator fell below 50 points. This month came at 51.8, so the worries are left behind for now.

Hawkish Carney – The Bank of England Governor Mark Carney held a speech earlier today and he sounded pretty hawkish. The odds for an interest rate hike in August increased after his speech as he touched the rate hike case again, although he said that they will be gradual and smooth. He said that the recent data gives confidence that the weak period in 1 was due to the weather. Still, there won’t be rate hikes in my opinion unless the economic data really improves.

China Tries to Avoid Trade War As Much As Possible Chinese officials repeated today that China doesn’t want a trade war. They said that yesterday too, but it is not China who is starting the war. It takes two to tango and the other party has already started to tango.

German Factory Orders MoM – The factory orders grew by 2.6% against 1.1% expected. This is good news for the next few months as new orders push companies to increase purchases.

Confident Nowotny – ECB’s Nowotny said today that he expects the Eurozone economy to remain solid and grow considerably in the coming quarters and years. These comments came after Praet said earlier that the risk of deflation has vanished in the UE and inflation is expected to remain strong. These words helped improve the market sentiment today.

Optimistic Merkel – Merkel just said that she will back cuts in EU tariffs on cars, not only for the US cars. This is helping improve the sentiment as well and the shares of car makers are surging today. But, I don’t think it will persuade Trump to call the trade war off.

US ISM Non-Manufacturing PMI – This indicator is expected at 58.3 points after falling to 58.6 points last time. ISM non-manufacturing has cooled off a bit because it used to be at around 59-60 a few months ago, but it still remains in a solid position.

US Crude Oil Inventories – It will be interesting to see the impact that Oil inventories will have on oil prices. Iranian officials said earlier today that trump’s tweets have increased Oil prices by $10 lately and they are correct to some degree. Also, OPEC decided to increase the Oil output.

FOMC Meeting Minutes – The FOMC minutes from FED’s last meeting are due this evening, but I doubt they will have much impact on the markets knowing that they are focused on Trump’s actions at the moment. 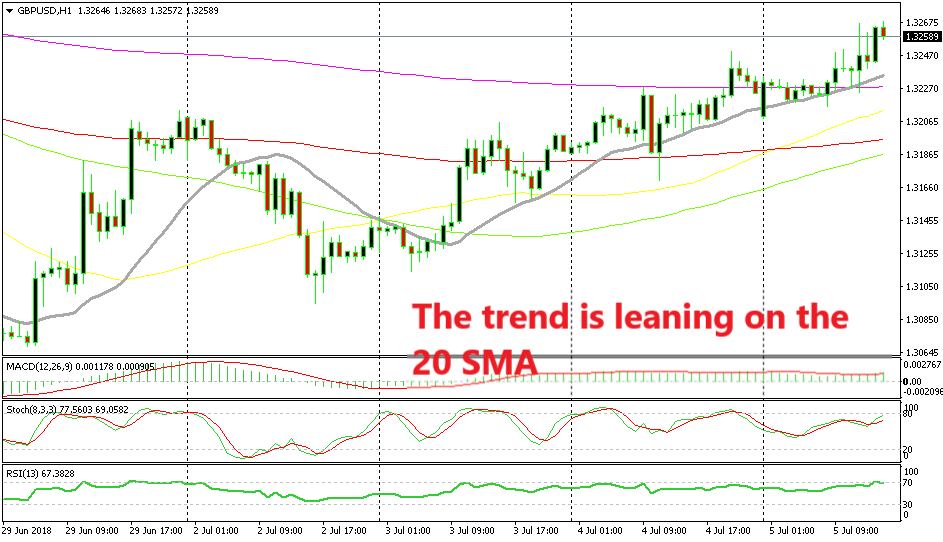 The 20 SMA is pushing the price higher

We have been bearish on this pair for quite some time. But, the trend of the last several days has turned bullish and fundamentals are helping its cause. The economic data from the UK has been positive this week and today Mark Carney sounded hawkish as he said that the weakness in Q1 was due to bad weather. So, the BOE will get going with rate hikes. The 20 SMA (grey) is also providing solid support to GBP/USD, pushing the price higher. For this reason, I will wait for a retrace down to the 20 SMA before going long on this pair.

Risk currencies are still grinding higher today as the sentiment has improved. Central bankers and Merkel are helping the markets with their comments. The economic data from the US might reverse the sentiment again though, so we will be watching the numbers closely as they get released.