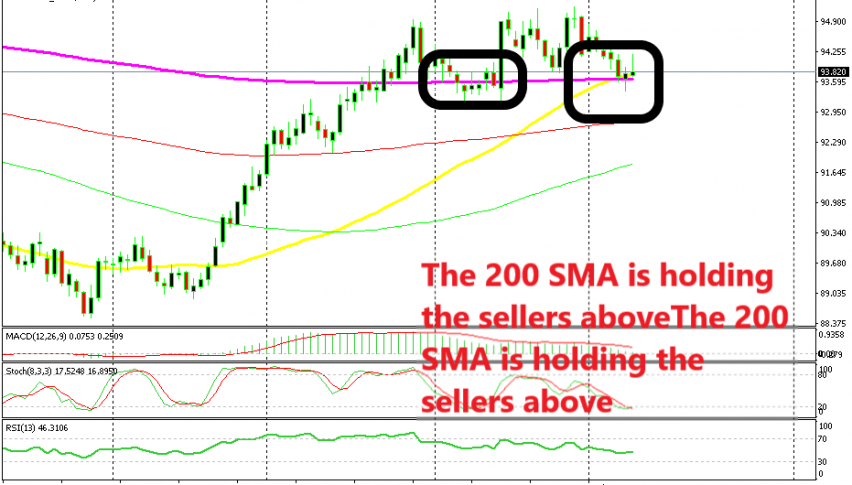 The chart setup points to a bullish reverse

The US Dollar USDX index has followed a bullish trend from mid-April until the end of May. It climbed about six points during that time and you could see that trend even without looking at the USDX. Just looking at major forex pairs you could see the Dollar uptrend. EUR/USD lost more than 10 cents during that period while GBP/USD lost around 13 cents, although some of the losses in this pair were due to the Brexit process.

After that, the uptrend stopped and USDX traded in a range. As a result, we have seen the USD go up and down since early June. Last week, the USDX was going through a bearish period and the USD lost considerable ground against major currencies.

But, the USDX reached a certain level where the sellers decided to call it a day and close their trades. The USDX met the 50 and the 200 SMAs on the daily chart late last week. These moving averages provided solid support to the index and the chart setup looks like the USDX will turn bullish soon.

The two moving averages are providing strong support. They were pierced briefly, but that doesn’t count as a break since the daily candlestick on Monday closed above those moving averages.

But that is not all. The stochastic indicator is now oversold and turning up. This means that the USDX index is oversold on this timeframe chart. Another bullish indicator is the daily candlestick from Monday. It formed a hammer, which is a bullish reversing signal, particularly after a bearish move.

Although, yesterday’s candlestick formed an upside down hammer which points in the opposite direction, it is not a very strong signal and today the day opened with a small gap higher, which shows that there is buying momentum in the USDX.

Gold Also Turning Bearish, Showing That Traders Are Turning to the USD Now
1 day ago
Comments