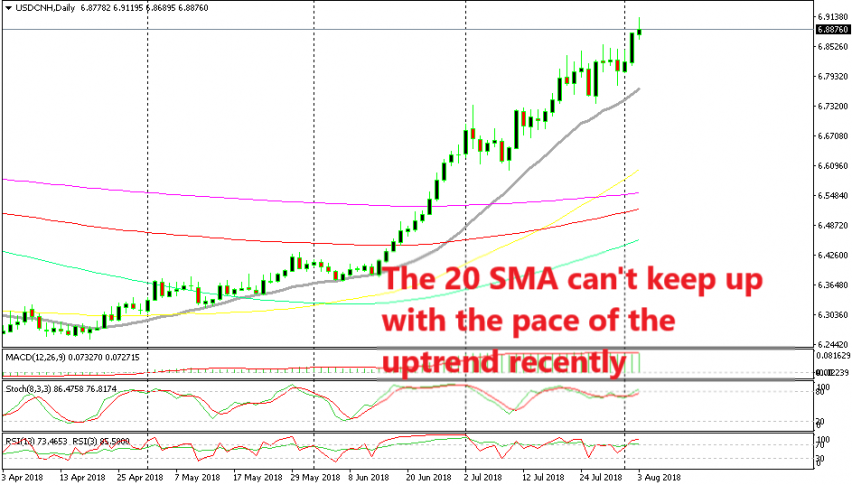 China Continues to Fight Its War on the Yuan Front

USD/CNH has been climbing for 8 consecutive weeks

China has found itself in the middle of a global trade war, although they should have seen it coming since one of Trump’s major battle horses during the presidential campaign was the US trade deficit with China. The US has imposed tariffs on $34 billion worth of Chinese goods and is planning tariffs on another batch of Chinese goods worth $200 billion. The idea was for a 10% tariff, but now we might see a 25% tariff as White House officials have recently highlighted.

China is fighting on the opposite side of the war. China retaliated on US Soybeans that it imports and Chinese officials have been getting pretty vocal recently, although China wants to avoid the trade war at any cost.

A senior Chinese diplomat was commenting earlier in Singapore regarding the trade tariffs that the US is trying to impose on China. He said that cooperation between the two global giants is the right way to go forward and that they are willing to defend the Iran nuclear deal with others, meaning European countries.

Although, China will feel the pain a lot more than the US, at least in the near-term, since the US imports far more from China than the other way around. But, China is using all sorts of ammunition it has to fend off Donald Trump.

One of the weapons it has is the currency exchange rate between the USD and the Chinese Yuan. Since China is a communist country and it doesn’t exactly have a free market economy, the government has a big say in the value of the currency. 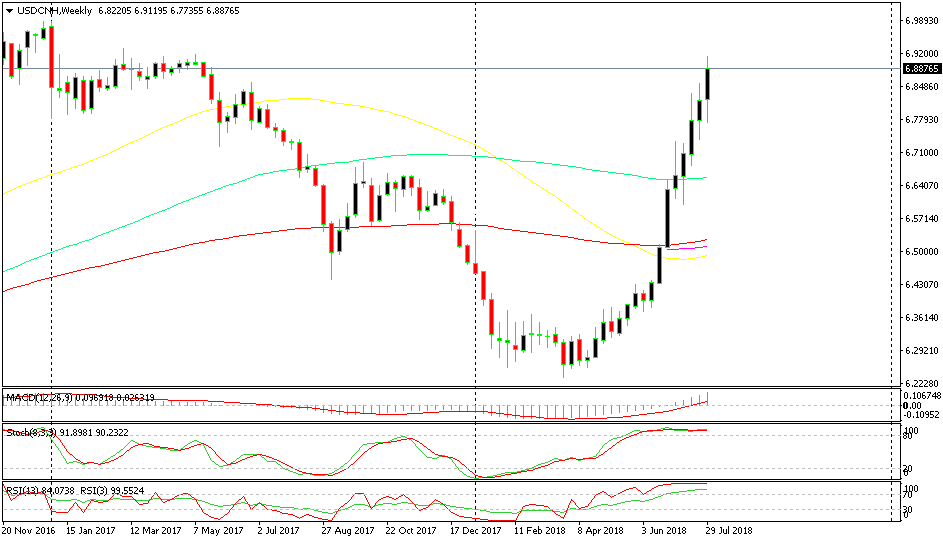 China has the Yuan pegged to the USD but they have been weakening it in the recent months. As you can see from the daily chart at the top of this article, the 20 SMA (grey) has been providing support to Yuan and it has been pushing it higher. Especially over the past two months, the uptrend has picked up considerable pace.

The 20 SMA couldn’t even catch up with the price because the PBOC (People’s Bank of China) has been buying the Yuan aggressively. Now Yuan is heading for the highs. USD/CHN reached the highest level in January last year when it peaked below $7. Judging from the strong surge this year, I think that we will reach the top pretty soon. The Chinese officials won’t hold back this time given the escalating trade war. China can’t win the war with this weapon alone, but it is a strong card they hold.