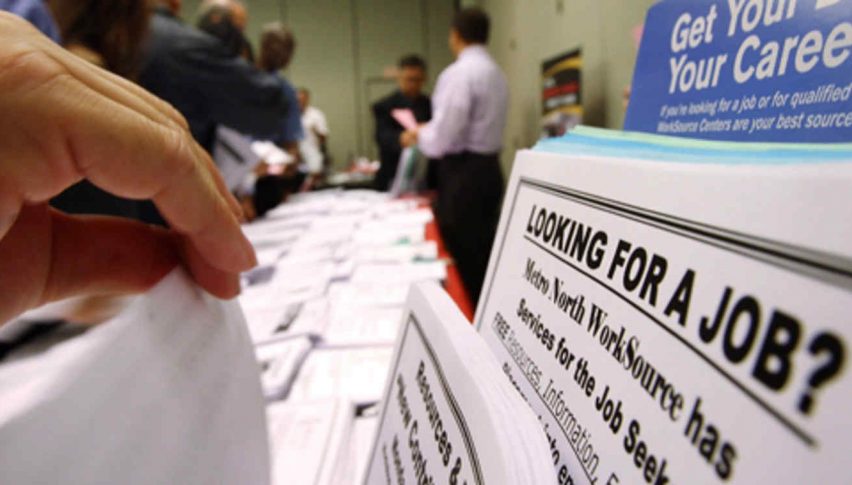 Forex Signals US Session Brief, August 3 – USD Falls Together with the Unemployment Rate

The UK construction sector posted some solid numbers yesterday but the market ignored it because the Bank of England meeting was due in a few hours. So, there was plenty of interest to see if the services data today was going to be as impressive as the construction numbers we saw yesterday. It was also interesting to see if the market was going to react. Neither of those things happened – the UK service data was a disappointment and the market ignored it nevertheless. The GBP still remains on the backfoot though after yesterday’s dovish comments from the BOE officials.

Spanish Services PMI – The services PMI index has been holding well around the 54-56 point region for the past several months in Spain. Today though, services dived, posting 52.6 points against 54.4 expected. The trend is turning worryingly bearish here.

German Services PMI – German services posted 54.1 PMI points, slightly lower from last month which stood at 54.4 PMI points. This sector has steadied in Germany after it softened in May and June.

UK Services PMI – The UK services were expected to remain in the same levels as last month, but there was hope that they might come out higher today after the impressive construction report yesterday. Although, the services took a dive to 53.5 points from 54.7 expected.

Italian Industrial Production – Industrial production grew by 0.5% in Italy against 0.4% expected. Last month was revised higher as well from 0.7% to 0.8%. So, the trend looks promising here after several negative months earlier this year.

Eurozone Retail Sales – The Eurozone retail sales grew by 0.3% this month against 0.4% expected. Last month was revised higher from 0% to 0.3%. This is another nice turnaround in the trend because retail sales have been around 0%-0.1% for many months in Europe.

China Threatens More Tariffs on the US – Chinese officials said earlier today that they will put tariffs on $60 billion worth of US goods, varying from 5% to 25%. Although, this is more of a threat to the $200 billion proposed US tariffs.

US Unemployment Rate – The unemployment rate fell to 3.9% as expected from 4%. This is a bit of a relief after the jump from 3.8% to 4% last month. Now unemployment is back on track again in the US.

US Non-Farm Employment Change – The employment change came at 157k against 191k expected and down from 213k last month. Employment change softened in April and May but picked up in June and July. Today’s number puts us back in the soft spot though and the USD felt the pain as it lost 40 pips.

US Average Hourly Earnings – The US hourly earnings increased by 0.3% in July as expected. This is a nice jump, although last month was revised lower to 0.1% from 0.2%.

US Trade Balance – The trade deficit grew again after having shrunk to $43.2 billion. Now it stands at $46.3 billion. So much for Trump’s tariffs aimed at decreasing the deficit.

US ISM Non-Manufacturing PMI – Non-manufacturing PMI is expected to slide to 58.6 points today after it increased to 59.1 points last month. That would still be a very decent reading nonetheless. 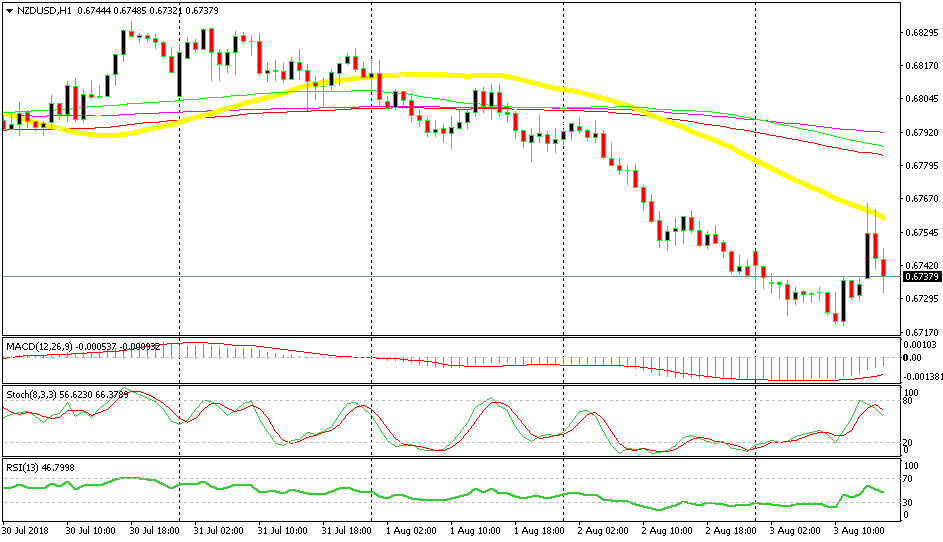 The retrace up is already complete

After the US non-farm employment change missed expectations and came pretty soft, the USD lost some ground and NZD/USD moved 40 pips higher. Although, the unemployment rate declined again after having jumped two ticks last month, so that was a positive aspect of the employment report. USD traders forgot about the non-farm employment numbers and started trading the decline in the unemployment rate. NZD/USD started reversing after it failed to break above the 50 SMA (yellow) on the hourly chart. The stochastic was also overbought which meant that the retrace was complete. The trend has been bearish for some time in NZD/USD and it picked up pace yesterday, so we decided to go with the flow and sell this pair below the 50 SMA. Now the price is approaching the take profit target.

The US employment report was a bit of a mixed bag earlier today. Now we wait for the US ISM non-manufacturing PMI. It this indicator is positive, then I expect the USD to resume the bullish trend again, although, it looks pretty bullish right now

Forex Signals Brief for May 25: RBNZ Hiking Rates for the 5th Time
1 day ago