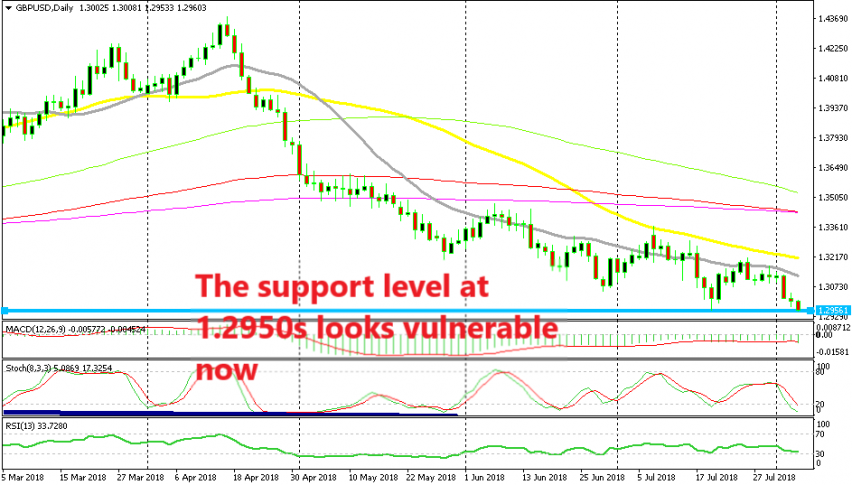 GBP/USD has resumed the bearish trend

Today is a summer Monday in forex and the price action in most forex majors is pretty minimal. The ranges are pretty narrow with the NZD/USD being the most volatile pair, which has traded in a 20 pip range until a couple of hours ago.

The economic calendar is very light today. German Factory orders and the Eurozone investor confidence are the most important data releases which have already come out, although the market reaction has been very minimal.

That has been the situation in all forex pairs, until two hours ago. The GBP decided to make a move a few hours ago and it took GBP/USD 50 pips lower. I can’t see any reason for this bearish move in GBP pairs, so it is just the sentiment that has gone against the GBP.

Dovish Fundamentals for the GBP

Last week I mentioned that the GBP would enter a bearish phase after BOE chairman Carney threw cold water over hopes for future interest rate hikes. That was the only thing that was keeping the GBP afloat because all other fundamentals looked terrible for this currency.

Trump’s trade war is a threat to the entire global economy and obviously to the British as well. The economic data from the UK has been the weakest among the major economies in the last year or two while inflation has increased considerably. Brexit looks increasingly like a mess and it seems like the UK will head for a no-deal Brexit.

So, the idea that the Bank of England would continue to increase interest rates on higher inflation was what was keeping the GBP afloat. Now that Carney has eliminated its possibility, the GBP is in a freefall and today’s price action shows that clearly. When all other major currencies are at a standstill and the GBP is the only one to take a dive in this hot summer day, then there is a problem with the GBP.

Although, the support area at 1.1950 did hold at the first attempt. This area has been the low so far this year and it might be a bit of a challenge to GBP sellers to push below it today. Although judging from the price action we saw this morning, I think that the support level will be broken pretty soon. That would open the door for 1.27 and then 1.25 if the bearish momentum picks up pace.

The economic calendar is light all week for both currencies, the GBP and the USD, so there won’t be any instructions coming from there. The UK GDP report and the US CPI (consumer price index) inflation numbers will be released on Friday and they might help push this pair lower or perhaps reverse higher, so until then, we just have to look at the price action and the market sentiment for trading instructions and the sentiment is pretty bearish for GBP/USD.

I like a person to speak firmly and forthrightly. Well done.