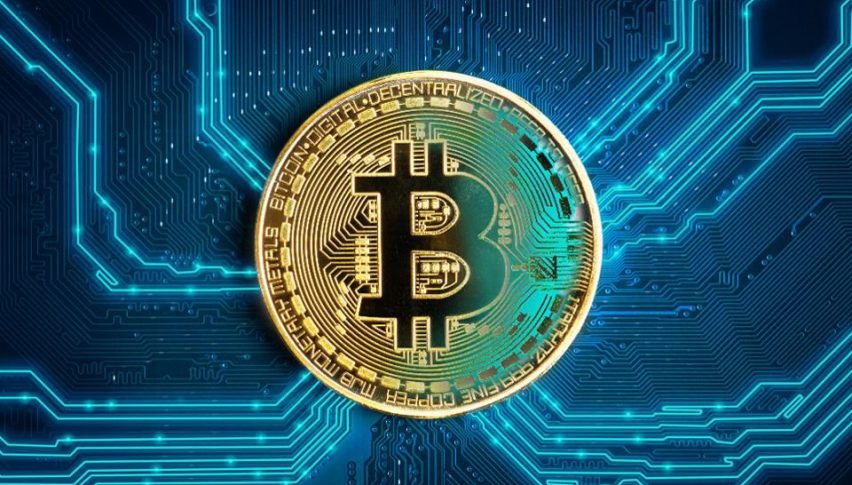 Bitcoin slipped below $8,00 again today and completes the bearish retrace

Today is Monday and the economic calendar is pretty light. Besides that, the summer is officially here so liquidity has dried up, therefore the price action has been quite slow. At the same time, the moves are pretty sudden when the liquidity is thin, so don’t take trading too lightly in such markets. Today was very quiet during the European session with 10-20 pip ranges in most major pairs, but now the market is starting to move and we are seeing some decent moves, particularly in GBP/USD.

This forex pair just broke this year’s low which stood at 1.2950s. Now the downtrend which started after the Brexit vote is finally underway again in this pair after a major retrace higher which lasted more than a year. Bitcoin retraced lower last week after it made a big bullish move last month. The retrace has brought Bitcoin to the 50 SMA on the daily chart. This is the moving average I was waiting to see before trying to get in on the Bitcoin uptrend. Now, the retrace is complete on the daily chart and the price reached the 50 SMA, so we decided to go long.

German Factory Orders – Factory orders took a dive in Germany as today’s number shows. They declined by 4.0%, against -0.3% expected. This makes it the 6th negative month this year, with factory orders increasing only in February and July. After last month’s 2.6% increase in orders, the market got excited that the negative trend might be over, but today’s terrible number takes us back to that bad spot. Are Trump’s tariff threats materializing? They surely don’t help the investor and business sentiment.

Eurozone Sentix Investor Confidence – On the other hand, the Eurozone Sentix investor confidence beat expectations. Investor confidence came at 14.7 points against 12.8 points expected. The trend has been bearish for this indicator since last December when it stood at 34 points. Although, the trend has started to change to bullish in the last two months after it bottomed out at just 9.3 points in June.

Iraq to Double Oil Supply – Ok, this looks like a bit of a stretch now – Iraq Oil Minister said that Iraq is planning to increase Oil output to 7.5 million bpd in 2023-2024 from around 4.3 billion bpd currently. He also said that oil prices are approaching stability. Oil is trading just below $70 at the moment.

Waiting for the Inevitable Recession Is Wrong, Says Bullard – FED’s Bullard is referring to the yield curve. The yield in 2 year bonds are approaching the yield of the 10 year treasuries in the US and the last time this happened was back in 2005-2006, 2 years before the big recession. Bullard doesn’t like this but the FED thinks this time is different and they will keep hiking rates.

EU’s Nowotny Wants Faster Normalization of the Monetary Policy – The ECB member Nowotny said that if the ECB started to hike interest rates slowly it wouldn’t harm the EU economy. This should be positive for the Euro, but we know that the ECB has next summer set as the earliest date to hike rates and unless we hear these words from the man himself, which is Mario Draghi, then the market will ignore it.

Italy’s Di Maio Playing Tough Against – The Italian Deputy Prime Minister Luigi Di Maio said that respecting EU’s fiscal rules is not priority in next year’s budget. This isn’t new and the risk here is that the national debt increases even more than it is in Italy, which is around 130% of the GDP from what I remember.

No Deal Is Better than A Bad Brexit Deal for the UK – The UK PM spokesman said earlier today that a no-deal Brexit is better than a bad-deal Brexit and Theresa May is prepared to go all the way if that is the case. Although, he added that the chances lean towards a Brexit deal. Threats coming from everywhere. Trump’s way of doing politics is contagious it seems.

Canadian Bank Holiday – Canadian banks will be closed for Civic Day. I have no idea what this holiday is about, but it explains why the markets have been so quiet today, because Canada is off. Just kidding.

US Loan Officer Survey – There isn’t an exact time for the release of this report but it is an indicator of the consumer spending and the consumer sentiment. The more the banks lend, the higher confidence in the banking sector about the economy, but there aren’t any forecasts either for this indicator. 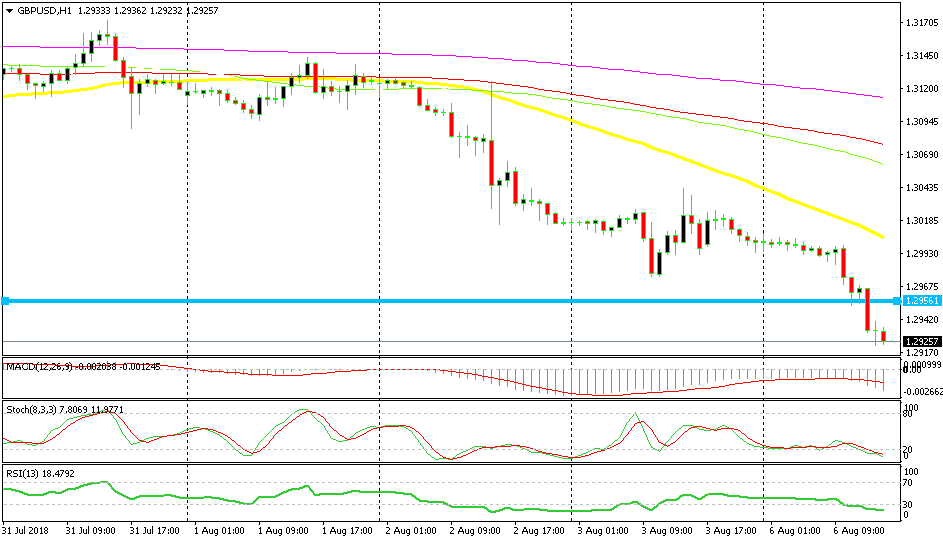 The previous support should turn into resistance now

GBP/USD turned bearish after Mark Carney’s speech last Thursday. He made it clear that there won’t be any more rate hikes soon and the GBP sellers got activated. The fundamentals were dovish and the trend was bearish until then, but it has picked up pace since Thursday and today the support at 1.2950s was broken. I could sell right now but I like to sell retraces during a downtrend. So I will wait for the price to retrace higher, probably to the previous support at 1.2950s, which will likely turn into support now.

The factory orders posted another terrible number in Germany today. It is not a good sign for the Eurozone and with Trump’s tariffs coming up later in the year, the situation doesn’t look good for any major economy. The market made a move today, but it has slowed again in the last hour. Perhaps, the US traders will make things more interesting when they come in shortly.