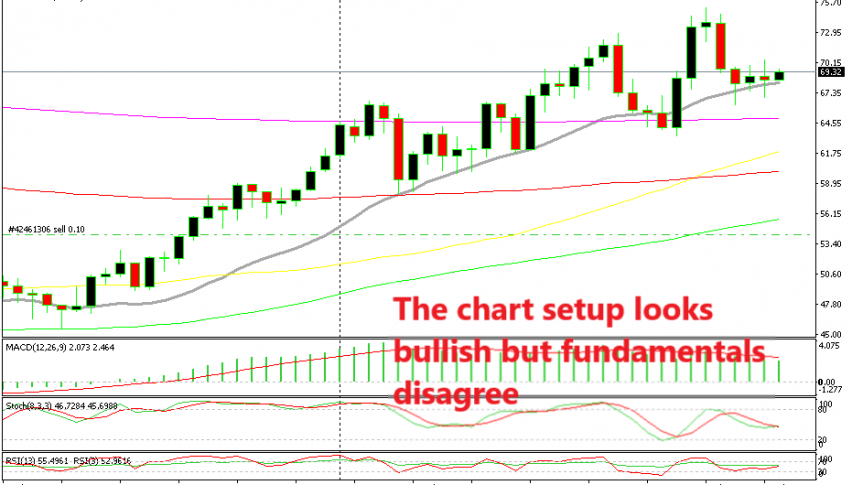 We should use both types of strategies when trading forex

Yesterday I highlighted the weekly chart setup in crude Oil. The setup looked pretty bullish compared to similar setups in the same timeframe. In fact, today the buyers were in charge at first and it seemed like the bullish chart setup was leading to a bullish reversal and the continuation of the bullish trend that has been going on for more than two years now.

But, the sellers returned and the daily candlestick doesn’t look so bullish now. Although, the bullish reversal chart setup is not over even though the sellers are showing some strength now. So, what does the bullish setup looks like in Oil?

Looking at the weekly chart of crude Oil, we cans see that the 20 SMA (grey) is still holding on. This moving average has been keeping the uptrend in place for about a year. Now, the price is again at this moving average which seems to be holding.

Besides that, the stochastic indicator is approaching oversold levels. The last two weekly candlesticks look pretty bullish as well. They have formed an evening star and a doji respectively, both of which are reversing signals after a retrace, especially during a clear trend such as the uptrend of the last two years.

So, the bigger picture seems bullish for Oil, but the fundamentals are sort of bearish at the moment. For starters, Iran has required a urgent meeting of the OPEC. The reason is the redistribution of Oil output quotas between OPEC member countries. I don’t know what will happen, probably nothing, but that is a slightly negative event for Oil.

Another negative event for Oil prices is the dispute between Saudi Arabia and Canada. They have been fighting in distance in the last few days after Canada condemned Saudi Arabia for locking up human and women’s rights activists. Saudi Arabia has is dumping Canadian assets that they hold, mainly forex reserves.

The trade war between the US and the rest of the world, particularly with China is accelerating. Today the US announced additional tariffs on $16 billion worth of Chinese good which will start on August 23rd and China responded in the same manner. Less trade means less demand for crude Oil.

The US crude Oil inventories declined by 1.4 million barrels this week and the report was just released. Although; it is still a decline so, the fundamentals are bearish at the moment but the technical analysis is pointing up. Who will win? Place your bets.