US producers are paying less for input prices

The US Dollar started the European session on the wrong foot and it has been on a soft spot in the first few hours. But, the USD buyers returned and brought the Buck back up. In the last few hours we have seen the USD climb higher despite the disappointing PPI (producer price index) inflation numbers. Today’s PPI report was pretty bad with both PPI and core PPI missing expectations and falling flat.

Commodities have been pretty quiet today. Oil has traded in an 80 pip range which looks tight after yesterday’s $3 decline. Indexes have found some solid ground and were crawling higher this morning which means that the market sentiment is currently positive. The GBP got a boost as well from Brexit rumours which suggested that the EU leaders were considering offering the UK a Brexit deal which leaves the UK inside the single market, but this has its perks which we will explain below, so have a quick reading guys.

More Rate Cuts from the RBNZ? – McDermott from the Reserve Bank of New Zealand said this morning that the chances of any rate hikes are off the tables and that the chances of a rate cut have increased. He is worried about the yield curve, growth and inflations. So, he sounded as dovish as it gets and today the NZD finds itself more than 100 pips lower from yesterday.

ECB Economic Bulletin Points to Risks Ahead – The ECB monthly economic bulletin looked sort of dovish. There’s economic growth which is broad based but it is slower than last year. US tariffs are a protectionist threat and the downside risks to the global economy have intensified.

EU to Offer A Concession to the UK? – There was a report published by Business Insider earlier today which suggests that the EU states are considering a Brexit deal which would leave the UK inside the European Economic Area. That is wrong for two reasons; first, this goes totally against the EU since it gives the UK the right to benefit from the EU market access without any obligations which would be tempting to many other EU member states to do the same thing and second, the Brexiters might not accept this since it ties the UK to the EU. It is just a report though and we don’t know if it is authentic.

Canada Housing Starts – New house starts came at 206k, down from 220k expected and 246k previously. This is a soft reading and comes after yesterday’s 2.3% in building permits. This might be the beginning of a weak period for the construction sector in Canada.

Canada Building Permits – Building permits declined by 2.3% against 0.15% expected last month. Residential housing permits also fell by 5.7%, so this report is pretty negative, although the yearly numbers were a bit better, but still not good enough.

US PPI – The producer price index was expected at 0.2% today but came at 0.0%, down from 0.3% last month. This is a surprising turnaround in input prices in the US. PPI was on a positive run in the last several months, so today’s number comes out of the blue.

US Core PPI – US core PPI also came softer than was expected. It was expected at 0.2% but came at 0.1%, two points down from last month. The consumer price index inflation is still below FED’s target so there is a possibility that the lower input prices might weaken the CPI inflation.

US Wholesale Inventories – Wholesale inventories fell by 0.1% against expectation which were for a 0.2% build up. This is a positive sign since companies will order more materials to build up their inventories. 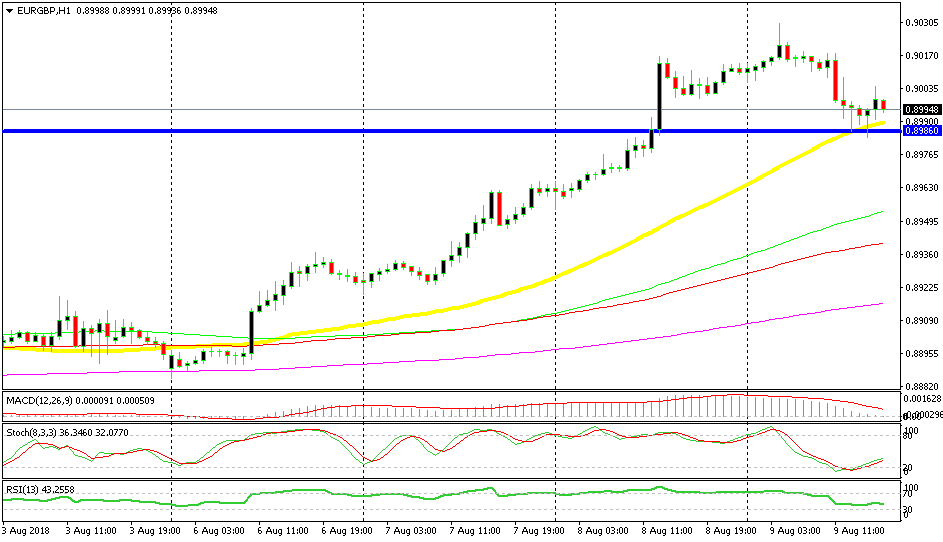 This looks like a really good place to buy this pair.

GBP/USD has been trading on a solid uptrend for the last several weeks, but this week the uptrend really picked up pace as the downtrend stretched further down in GBP pairs. This morning though, EUR/GBP was retracing lower and it reached the 50 SMA (yellow). We decided to buy this pair right there since the 50 SMA was holding and the stochastic indicator was oversold, which meant that EUR/GBP was oversold on this timeframe chart. Besides, the previous candlesticks formed pins/hammers which are reversing signals especially when the trend is bullish and the retrace down is complete.

The USD is continuing to advance in the afternoon, although I can see some solid upside in safe-havens. I haven’t heard anything that would turn the market sentiment negative but the JPY is making gains against the USD and EUR/CHF is more than 70 pips lower so far today, so be careful not to get caught in the middle of a storm today. Here it has started to rain heavily, thank God.