The USD began the next bullish phase yesterday in the afternoon after having retraced for several days. The USD started getting its act together yesterday and today the USD has stretched the bullish move further. It seems that the Buck has resumed the uptrend again. The US consumer price index (CPI) inflation report came as expected at 0.2% and that gave the USD another push higher. Perhaps, USD traders were waiting on the sidelines in the last few hours leading to this report just in case there was a negative surprise. That didn’t happen and the USD resumed the uptrend immediately after the CPI report was released.

At the same time, the Canadian unemployment rate was published and it lost two decimal points, falling to 5.8% from 6%. Canadian unemployment rate has been at this level for many months but it jumped higher to 6% last month for some reason. It came back down today though so the hiccup is now over. It is a positive reading after a few negative economic reports we have seen from Canada this week. The UK monthly GDP came at 0.1% against 0.2% expected and down from 0.3% that we saw last month. The GBP resumed the bearish trend after this report.

French Industrial Production – Industrial production increased by 0.6% in July against 0.5% expected. This is a promising turnaround after several negative months, although this is just one month. We have to wait and see how the industrial sector will perform in the next couple of months.

Italian Trade Balance – The trade surplus increased to 5.07 billion Euros this month. Trade balance has been at around 3 billion in the last several months so this is a nice jump. Although, we don’t know if it increased because exports increased or because the imports fell.

UK GDP – The quarterly GDP in the UK came as expected at 0.4% but the monthly GDP number missed expectations coming at just 0.1%. The economic growth has been weakening in the UK and if it continues like this, soon the UK economy might enter a recession.

UK Manufacturing Production – Manufacturing production increased by 0.4% in the UK in July against 0.3% expected and last month was revised higher to 0.6% from 0.4%. This report kept the GBP from crashing down after the weak monthly GDP numbers.

UK Construction Output – The construction output report was expected at 0.2%, but it the output increased by 1.4%. That was another positive reading from the UK but it didn’t help the GDP though.

Prelim Business Investment UK – Business investment increased by 0.5% against 0.4% expected. Although, last month’s decline was revised to -0.4% from -0.2%. That took some of the shine off this month’s positive number.

Canadian Unemployment Rate – The unemployment rate was expected to decline to 5.9% today after it increased to decimal points last month. It fell back where it was before last month at 5.8% so the unemployment is back in track in Canada after the surprising jump last month.

Canadian Employment Change – New jobs increased by 54.1K this month against 17K expected. This is the biggest increase since January, so the employment sector looks solid.

US CPI – The US consumer price index came at 0.2% as expected, up from 0.1% last month. It is not much but it is an increase nonetheless.

US Core CPI – Core consumer price index grew by 0.2% as well, as expected. The number is the same but this is a bigger increase since it is the core number. Core CPI is usually lower than the main CPI number and a 0.25 increase on a monthly basis would mean 2.4% core inflation by the end of the year, so it is a respectable increase.

Trump Helps to Send the Turkish Lira Tumbling – the Turkish Lira has been in a freefall this year and the decline has accelerated lately. Today USD/TRY has jumped above $6 and Erdogan urged the Turks to sell their forex and Gold reserves. I don’t think that will help the Lira, it will only make the situation worse. Donald Trump has just tweeted that the US will increase Steel and Aluminium tariffs on Turkey to 20% and 50% respectively since the TRY is weakening pretty fast. That comes at the wrong time for Turkey. Trump also said that relations with Turkey are not good at this time. That should put some more pressure on the Lira and on the Turkish economy. 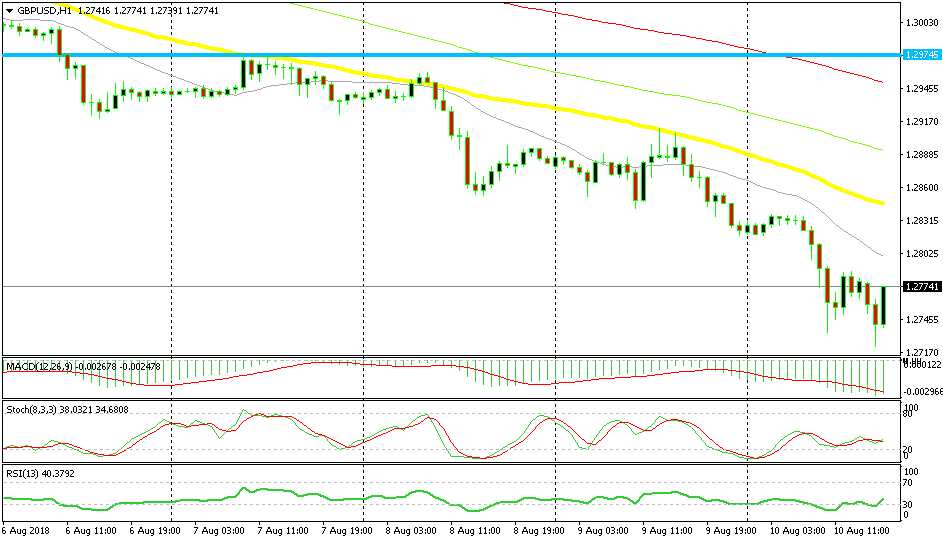 I am thinking about selling GBP/USD. It is retracing higher at the moment which is good for sellers. This pair has been on a solid downtrend for months and today the downtrend picked up pace after the soft monthly GDP figures. The 20 SMA (grey) might be the target now before the turnaround lower, but I would like to see the price reach the 50 SMA (yellow) before selling since this moving average is a stronger indicator.

The US Dollar continues to advance in the US session but so are the safe-haven currencies. The JPY and the CHF are gaining even against the USD, which means that the sentiment in the market is negative at the moment. Today is Friday as well and the markets will close at the end of the US session so the price action might be a bit strange until then.