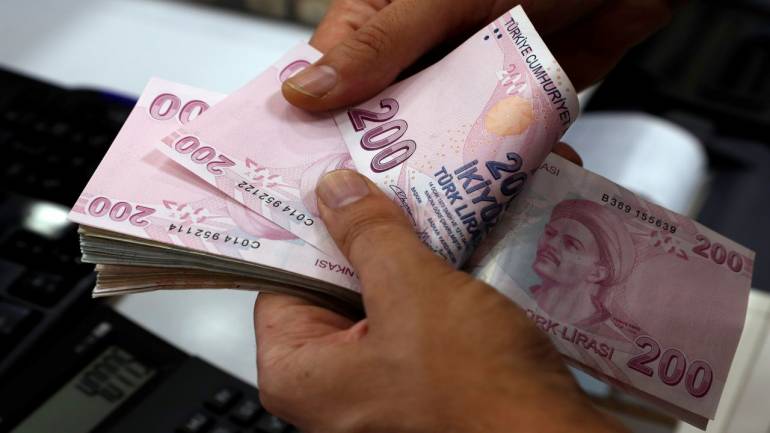 Everyone is selling the Lira despite Erdogan's call for the opposite

All forex traders are aware of the current financial crisis in Turkey, particularly traders who trade emerging markets currencies, such as the Turkish Lira. The Lira has gone into freefall lately.

This year, it has lost around a third of its value and the decline has accelerated dramatically in recent weeks. At the beginning of this week, USD/TRY was trading just below 7 according to my broker. It declined below 6 during the week as the central bank of Turkey intervened by hiking the interest rates by 1.50% but it jumped back up by the end of the week. We will see how the Turkish Lira will behave next week since we are forex traders and like to distinguish between fundamentals and technicals, but things don’t look so good as of now. Here, the fundamentals are doing all the damage for the Lira.

So, what’s going on and more importantly, will this last?

To answer the more important question: it will last. Why? We will explain below. Although one of the reasons for this which probably aggravated the situation is the fact that Erdogan is a bit of a lord of the country and he does what he pleases. He has removed all the economists that have been warning him about financial and economic troubles that may lie ahead. He got rid of all the opposition in the financial circles in Turkey and only left those who agree with him on everything. He even placed his son-in-law as the head of the central bank. Erdogan has even instructed his son-in-law not to hold interest rates because it would weaken the Lira. That doesn’t make sense but let’s leave it aside because that is not what is hurting the Lira.

One of the things are the tariffs that US President Donald Trump has imposed on the world, including Turkey. But Turkey and the US are not in a good relationship, as Donald Trump Tweeted on August 10th. Turkey has imprisoned a US pastor and had refused to let him go, while asking for the ex opposition leader Gylen to be extradited from the US. So, relationships are not good. In the same tweet, Trump said that US import tariffs on Turkish Steel and Aluminium will double to 50% and 20% respectively. The Lira dived even faster after that tweet from Trump.

Turkey exported around $1.2 billion worth of steel products to the US last year and with these tariffs, the exports are going to fall dramatically. Although, with a trillion Dollar economy, Turkey shouldn’t be facing such problems. It’s not like Turkey depends on raw material exports like other countries such as Gulf countries and Russia. But it was a punch at the time when Turkey was down, and still is.

The real problem lies elsewhere. The FED and other major central banks such as the ECB, the Bank of Japan and the Bank of England started expanding their balance sheet by buying bonds and pumping money into their economies and the global economy. Interest rates in developed countries have been close to zero for a long time, and in some occasions such as in Switzerland and Japan rates have been negative and growth has been very weak in these economies. As a result, money has flown abroad in large quantities, especially in emerging markets such as Turkey, India, South Africa, Indonesia, Vietnam, China, etc.

Turkey’s economy has been experiencing a very strong growth during this period. Money was flowing in, business was great and tall buildings were mushrooming. The return from construction and real estate is pretty big when the economy is doing well – the prices of homes and business building increase enormously. As a result, everyone tried to get a piece of the action during this gold rush. But, buildings and real estate are not something that produce real value in the long term for the economy, unlike factories or IT industries. Many liberal economists tried to warn Erdogan but the slogan in the last decade in Turkey has been “Love It or Leave It”. My mate from the profession tells me that many of these economists have left as Turkey has become more and more dictatorial.

Erdogan had his way, and now comes this. These people tried to point out the naked king, but no one heard it. Now that major central banks are beginning to shrink their balance sheets and are retrieving the money back by selling bonds, especially the FED, problems in emerging money appear. Turkey holds a big external debt, at 53.3% of the country’s nominal GDP for that year and it is likely to have increased this year. That means that the interest they have to pay is pretty big and it has to be paid in foreign currency, especially in US Dollars. 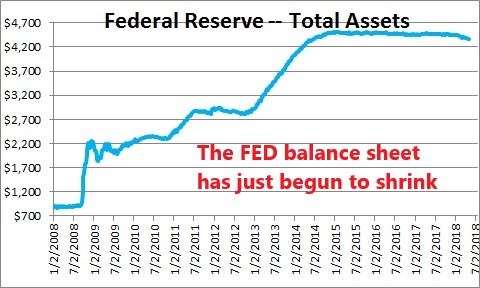 The dip is barely visible

That increases the demand for foreign currency to pay the interest and the debt settlements. Besides that, money is flowing out of the country too since the FED is starting to shrink the balance sheet, which is the real problem. If you look at the chart above, you can see that the line is starting to head down. It is a very minimal decline. The FED balance sheet was at $4.8 trillion until less than a year ago, meaning that trillions of US Dollars were fueling the world economy, particularly the emerging markets.

Now, it is starting to shrink and only such a small decline is causing mayhem in Turkey. Imagine when the line dips to 2010 or even worse, to 2008 levels, which would mean shrinking the balance sheet to below $1 trillion. Of course, not all emerging market economies are that dependent on US Dollars, but it seems like Turkey is. How bad will it get? No one knows exactly.

I hope Turkey gets its act together, but fundamentals such as the shrinking FED balance sheet and Erdogan’s old school politics point to big troubles for Turkey and the Turkish Lira.