Forex Signals US Session Brief, August 23 – A Bad Day for the Aussie As Political Troubles Mount Up - Forex News by FX Leaders 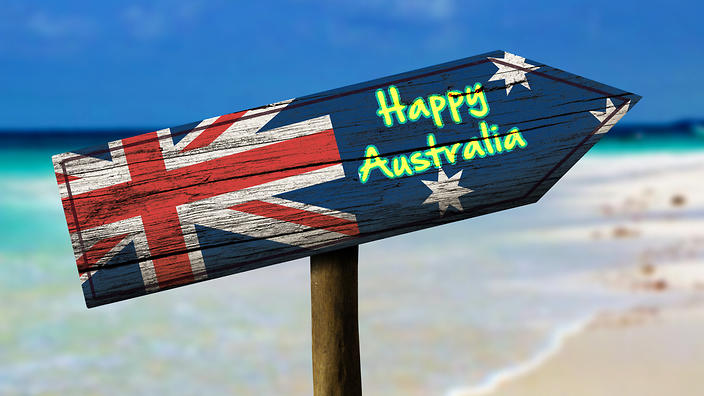 Forex Signals US Session Brief, August 23 – A Bad Day for the Aussie As Political Troubles Mount Up

I woke up this morning to find the Australian Dollar 70 pips lower from last night. Right away, I thought that the US tariffs on China had hit the AUD since the Australian economy is tied to the Chinese economy due to high exports. Well, that is another negative factor for the Aussie, but the real reasons were the eviction of the Chinese electronics giant Huawei from Australia and the announcement that the Foreign Minister made. She said that she will run for the head of the Labour party against the current Prime Minister Turnbull.

On other fronts, South African officials commented this morning, saying that they will need clarification on Trump’s tweet about land expropriations and farm seizures without compensation in South Africa. Finally, someone said something about the increasingly explicit situation in South Africa, because this thing has been going on for a couple of decades in SA and murders of white farmers have been horrible there. The European service and manufacturing data was sort of mixed but nothing to move the markets or change the direction of the Eurozone economy.

Eurozone Flash Manufacturing PMI – The Eurozone manufacturing PMI was expected to remain unchanged at 55.1 PMI points as last month. It declined to 54.6 points and the decline came from Germany, as German manufacturing numbers were a bit on the soft side today, while the French manufacturing data was a bit better than expected. It still is at a decent level, but the trend continues to be declining since late last year.

Eurozone Flash Services PMI – The services PMI number remained unchanged at 54.4 PMI points as expected. The trend here has been bearish as well, but at least this month it didn’t decline further.

Time to Exit Expansionary Mon-Pol Says ECB’s Weidemann – Weidemann, who also is the head of the Bundesbank, said this morning that it is time for the ECB to tighten the monetary policy. He added that ending the QE programme is just the first step. This should have been a very hawkish comment for the Euro but it seems that he won’t run for the head of the ECB next year because Merkel wants the head of the European Commission, so she has to let the ECB go this time.

South Africa Will Seek Clarification From the US Embassy – After Donald Trump tweeted about the land seizures and farm murders in South Africa, the SA officials said that they will need clarification from the US embassy there. There is nothing to clarify, this thing has been going on for decades and everyone knows about it.

China Is Extremely Concerned About Australia – Chinese officials said today that they are really concerned with Australia banning Huawei from taking part in Australia’s telecommunication infrastructure projects. China is taking it from all sides nowadays, but this could go very wrong for both countries if tensions escalate.

A Good Brexit Deal Very Likely – That’s what the UK Brexit Secretary Dominic Raab said a while ago. But he also added that the UK should be ready for other scenarios if the EU is not as ambitious and pragmatist as Britain. So, no deal then Raab, just blaming the EU in case there is no deal, which seems likely now.

Markets Could Crash if Trump Gets Impeached – These were Trump’s words on Fox and Friends. He also added that the wall with Mexico will be built. Markets are not reacting to his comments right now though, but impeachment wouldn’t be fair nonetheless.

FED’s George Says Trump’s Criticism Won’t Affect the FED – Kansas City FED president George said that the FED will likely hike interest rates two more times this year and Trump’s comment won’t change their mind. She is right, rates have to go up if you don’t want inflation to explode at some point.

US Unemployment Claims – The unemployment claims were expected at 215k but came at 210k. Continuing claims also came a bit lower so this is one more positive report regarding jobs. Too bad wages are not following through.

US Flash Manufacturing PMI – US manufacturing data came at 54.5 PMI points against 55.1 points expected. The trend is bearish here as well, so it is very similar to Europe.

US New Home Sales – New home sales came at 627K against 643k expected. It is still a solid number and the USD is finding some bids now after the release of this report.

Eurozone Consumer Confidence – The consumer confidence fell to -2 points from -1 prior. Tariffs and trade disputes are hurting the confidence among consumers in the US and in Europe and they will likely hurt the global economy as well if it escalates. 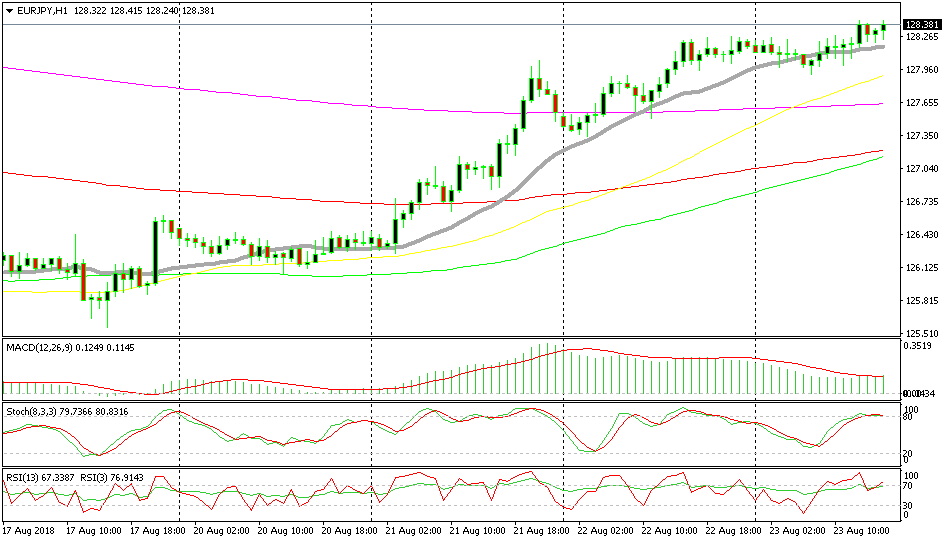 20 SMA is pushing the price up

Two hours ago we opened a buy forex signal in EUR/JPY. This pair was finding strong support at the 20 SMA (grey) which means that the trend is pretty strong since the smaller moving averages have come into play. The previous hourly candlestick formed a small hummer when we took that trade. That means that the price was going to turn bullish after the small retrace down. The market sentiment has improved as well, which is bad for the JPY. That signal closed just a while ago so it is good that we took it.

The economic data is out of the way for today. But remember that the Jackson Hole Symposium has begun and there might be comments from central bankers coming up. Although, the scheduled speeches start tomorrow. By the way, keep an eye on Trump’s Twitter guys.

Forex Signals Brief for May 25: RBNZ Hiking Rates for the 5th Time
1 day ago