Forex Signals US Session Brief, September 13 – A Day for Central Banks but the US CPI Inflation Steals the Show - Forex News by FX Leaders 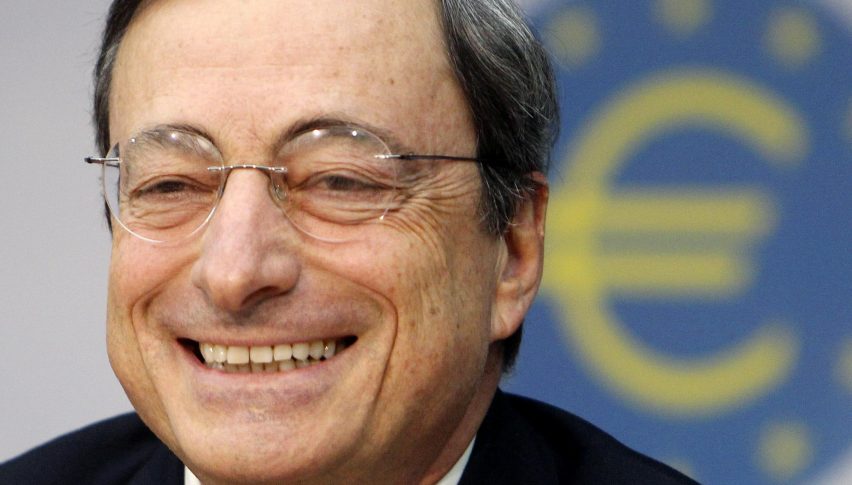 Forex Signals US Session Brief, September 13 – A Day for Central Banks but the US CPI Inflation Steals the Show

Central banks have been the main focus today during the European session. The central bank of Turkey hiked interest rates by a surprising 6.25%. That’s a lot more than the market was expecting and the Turkish Lira jumped higher immediately. But, the jump stopped short and it is sliding lower once again. Erdogan popped up before the Central Bank of Turkey though, saying that they must lower interest rates to stabilize prices. We know he doesn’t know much about economics and this comment once highlights that, but that comment also made the 625 basis points hike even more surprising which increased the impact on the Lira.

The Bank of England also held their meeting today. They kept interest rates unchanged as anticipated, but the GBP slipped 30 pips lower as the statement highlighted the increased uncertainty which comes from Brexit. The European Central Bank kept interest rates unchanged at 0% in the European session. When the US session started, all attention shifted from the ECB to the US inflation report. Inflation softened once again in the US and the USD started tumbling lower, so that’s where we are right now.

UK’s Raab Confident for A Good Brexit Deal – The Brexit secretary Dominic Raab said that he is very confident for a good Brexit deal. He also added that the UK will be haggling for every penny on Brexit payment, which doesn’t sound like a good plan to get a good deal.

China has Received Invitation from the US for Trade Talks – China said that they welcome this, although I don’t think there will be any good outcome this time either, even if there is dialogue. The trade surplus with the US grew again in August to record highs and China said that this is due to demand from the US. We know Trump hates this.

New Measures to Prevent Lira Volatility from Erdogan – The Turkish President Erdogan said this morning that he will introduce new measures to calm the Turkish Lira market down. We don’t know what these measures are but they must include capital control, just like in Indonesia, otherwise, the Lira is doomed.

Brexit Divorce Bill Will Not Change for the EU – The EU announced today that they will not reconsider the Brexit bill, but the UK is not willing to pay up if there won’t be a deal. Too messy at the moment, and no one knows how this mess will end up.

BOE Keep Rates Unchanged – The Bank of England kept interest rates unchanged at 0.75% as expected. The statement wasn’t much different from last month apart from greater uncertainty from Brexit and global trade.

Turkish Central Bank Hikes Rates Massively – The Central Bank of Turkey increased interest rates by 6.25% despite Erdogan calling for lower rates earlier today, which didn’t make much sense. The Lira strengthened and USD/TRY fell from 6.50 to 6, but the decline has stalled for now.

ECB Leaves Rates on Hold – The European Central Bank kept interest rates unchanged at 0.0%. The statement was little changed although they pleaded to keep the stimulus program running. They released inflation and growth forecasts as well. Inflation is expected to remain unchanged at 1.7% in the next three years, while growth is expected to tick lower to 2.0% in 2018 from 2.1% previously thought and to 1.8% in 2019 down from 1.9%.

Mario Draghi Press Conference – Draghi mentioned the risk from emerging markets such as Turkey and Argentina as well as the situation with the budget in Italy, but he added that those risks haven’t spilled over to Eurozone states. The market is taking this positively since he has not mentioned anything about postponing hiking of interest rates due to these factors and the Euro is climbing higher.

Soft US CPI Inflation, Stronger Wages – Inflation has picked up recently in the US, albeit very slowly. Today, the inflation report reversed those gains. CPI was expected to grow by 0.3% in August but it fell short at 0.2%. Core inflation also came lower at 0.1% from 0.2% previously. Wages increased by 0.2% on an hourly basis and by 0.5% on a weekly basis, but the market is concentrated on the inflation figures and the USD has lost half a cent so far.

US Unemployment Claims – Unemployment claims have been in the 210k region for quite some time and they were expected to remain the same today. But the actual number came at 204k, which is below the trend, although we will have to wait for next month’s number to see if the trend will change. 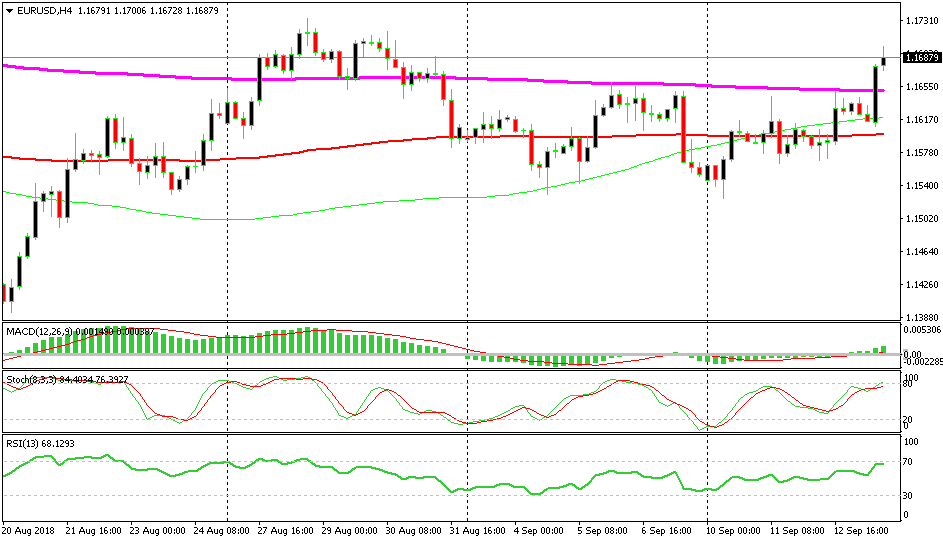 The 200 SMA has finally been broken

The ECB revised lower growth forecasts today, but that was expected given the soft economic numbers in recent weeks. What was a bit surprising was the upbeat speech from Mario Draghi, which is fuelling the Euro at the moment. Draghi’s conference took EUR/USD above the 200 SMA (purple) on the H1 chart and the soft US CPI figures gave it a hand as well. So, we have shifted our bias to bullish for EUR/USD. But, we will wait for a retrace lower to the 200 SMA before opening a buy trade here since stochastic is overbought.

Plenty of economic events today. Central banks were in focus during the European session but the soft US CPI inflation figures stole the headline as the US session opened. The Euro has turned bullish after Draghi’s comments while the USD has turned bearish. Let’s see if the markets will continue on this path as the US session evolves or whether the demand for the USD will return.