Yesterday the US CPI (consumer price index) inflation came on the soft side as the headline and the core monthly numbers missed expectations. The yearly PI number was revised lower as well to 2.7% from 2.8% previously. This raised some old questions again.

Is inflation cooling off again after picking up for a few months? Is this a negative sign for the US economy? The USD lost considerable ground yesterday but most of forex majors today have been trading up and down in small ranges. This sort of price action tells us that the market is waiting for the US retail sales report which will be released today. If we see another negative report from the US today, then the USD should complete another bearish leg since it would be another negative sign from the US economy, which is in a decent shape at the moment.

Although, there have been some interesting events during the European session. USD/TRY was trying to break below the 6 level again today after it failed yesterday before Erdogan popped up again and ruined things for TRY bulls.

In Japan, Prime Minister Shinzo Abe held a debate and he talked quite extensively about the monetary policy. The main comment was that he wants the monetary easing to be over at some point, which is not coming anytime soon by the way. The central bank of Russia increased interest rates again to 7.0%.

Bank of France Cuts Growth Forecasts – The Bank of France revised inflation higher but cut its growth forecasts for 2018 and 2019 to 1.6% from 1.8% and 1.7% respectively. Although ECB’s Villeroy said that the French economy is growing above the historical average, it lags behind other EU peers due to reforms.

Political Reasons Behind Lira’s Decline for Erdogan – Turkish president Erdogan said that politics are the reason for the decline in the Lira. He added that patience is running out with the central bank. USD/TRY was about to break the 6 level but it reversed after Erdogan’s comment about the central bank.

Eurozone Trade Balance – The Eurozone trade balance was expected at 16.3 billion but it fell short at 12.8 billion. The surplus used to be above 20 billion early in the year but it has declined steadily and now stands at around 12 billion, so the trend doesn’t look too promising.

Japan Prime Minister Abe Talks About the Monetary Policy – Prime Minister of Japan Shinzo Abe said this morning that the monetary easing cannot continue forever. The Yen gained some pips but it reversed lower again pretty soon after the market came to terms that nothing substantial will change anytime soon.

BOE Carney Speaks – The Bank of England Chairman Carney said in the European session that they are prepared for any Brexit scenario. He added that the fall in house prices is not a prediction of what will happen if Brexit goes wrong.

UK Labour to Vote Against Brexit – According to The Financial Times, the British Labour Party won’t vote any Brexit deal. This is getting very confusing so we will see how it develops from here.

Mixed US Retail Sales Report – The US retail sales came at 0.3% against 0.5% expected for August and core retail sales also missed as they came at 0.1% against 0.4% expected. These are some soft numbers but the revisions from July improved the report. The main figure was revised to 0.9% from 0.6% and the core number was revised to 0.7% from 0.5%. As a result, the USD jumped higher despite soft numbers for August.

The Economy Is Strong for Kaplan – FED’s Kaplan said that the US economy is pretty strong and retail sales are noisy. The FED should continue hiking rates gradually and patiently.

US Import Prices – The US import prices fell by 0.6% against falling by 0.2% as expected. Export prices also fell. We will see if these declines will have an impact on inflation this month.

US Industrial Production – The US industrial production increased by 0.4% against 0.3% expected. Last month’s number was also revised higher to 0.4% from 0.1% previously. This is a good report but it hasn’t had any impact on the Dollar.

US UoM Consumer Sentiment – The US consumer sentiment is expected to come at 96.7 points. Last month’s number was revised higher to 96.2 points from 95.3 points, so half the work is already done 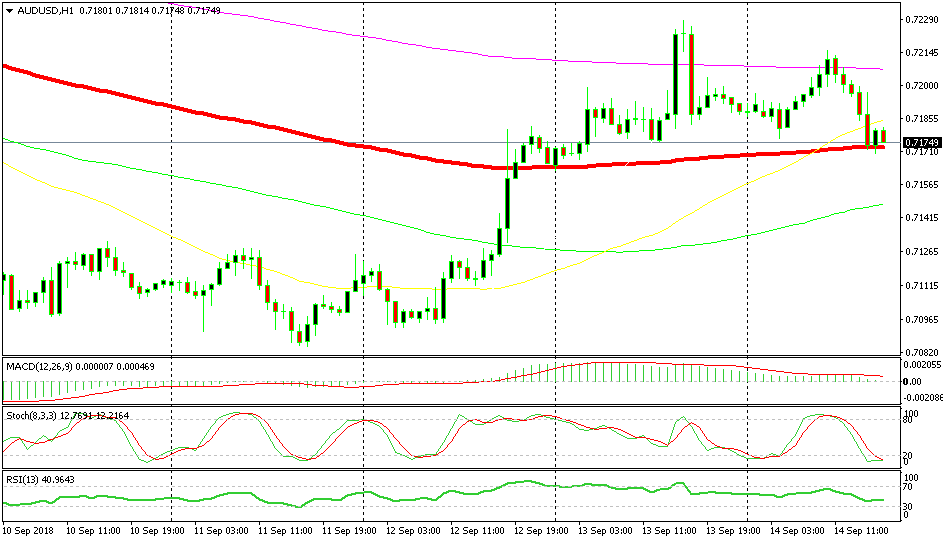 The 100 SMA is holding its ground

The trend has changed for AUD/USD this week. This pair has turned bullish as the USD has retreated but today we have seen a retrace take place, although it seems as this retrace might be over now. Stochastic is oversold on the H1 chart and the 100 SMA (red) is providing solid support. The previous H1 candlestick closed as a doji which is a reversing signal after the bearish move. So, we are about to go long on this pair right now.

A very soft retail sales report from the US a day after the soft inflation report which was published yesterday. Yet, the USD jumped higher mainly due to higher revision from last month. The price action seems to favor the USD, so perhaps the Buck will turn back to bullish after a soft week.