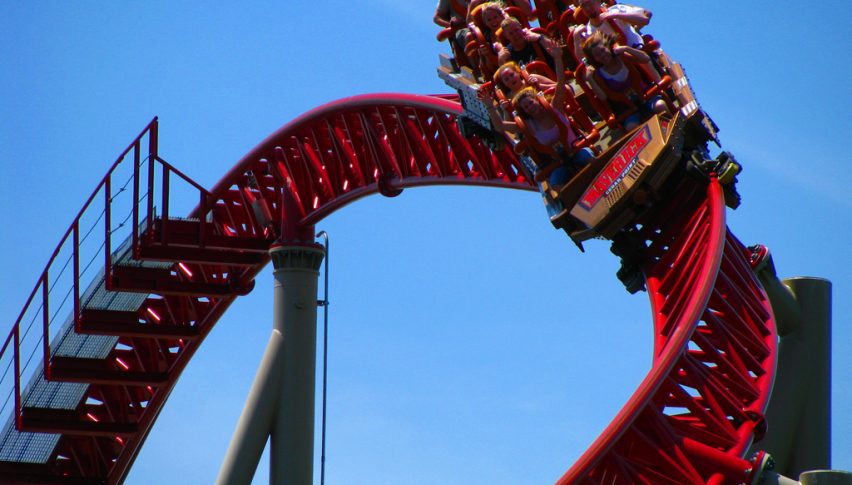 That's how it must have felt for GBP traders today

The main forex events today were the UK inflation report and the meeting in Salzburg between EU leaders and the British Prime Minister Theresa May. The Bank of Japan meeting and the statement that followed didn’t offer much to the market, pretty much the usual stuff, which left JPY trades on the sidelines. The ECB president Mario Draghi has a speech scheduled for later today and I think it might have a big impact on the Euro because this meeting is about the future of the monetary policy.

Although, we already had plenty of action today during the European session, especially in GBP pairs. The consumer price index (CPI) inflation beat expectations fair and square as the annualized number came at 2.7% against 2.4% expected. The core number also jumped higher and moved above 2% once again. The GBP jumped 60 pips higher on that report, but Brexit news keep running things for GBP traders.

Shortly after that, we heard news from the EU-UK meeting in Austria that the British PM May refused the improved offer from EU’s Brexit negotiator Barnier regarding the Irish border. The GBP made a bearish turnaround and lost around 100 pips on that news. EUR/USD has reversed down as well, so here we are, unchanged on the day. Although, risk currencies such as commodity Dollars are still on the rise.

Kuroda Still Wants Inflation at 2% in Japan – The Bank of Japan governor Kuroda commented early in the morning that inflation is taking longer than expected to pick up. Well, it has taken decades and it is not going anywhere. He added that the BOJ will continue with the current monetary policy until that happens, so another decade probably?

Davis Says UK Must Wait Until the Last Minute For A Brexit Deal – Ex Brexit Secretary David Davis said that the EU is softening its stance regarding the Irish border and that is true. He also added not to take anything too seriously until the last minute and he is right about that too.

Eurozone Current Account Balance – The current account balance for the EU came at €31.9 billion, up from €28.5 billion. We got a signal for this from the Italian trade balance earlier in the week though.

UK CPI Inflation – The UK CPI (consumer price index) report was pretty great today. The main yearly number came at 2.7%, up from 2.5% previously, while core inflation increased to 2.1% from 1.9% last month. The monthly number also came higher at 0.75% from 0% last month, so it was a really positive report and the GBP jumped.

Eurrozone Construction Output – The construction output of the Eurozone for August was expected to grow by 0.2% but it grew by 0.3%. It is not a major move, but the revisions were much better. The previous month was revised from 0.2% to 0.7% and the annualized number was revised to 3.0% from 2.6%.

The Goal of the Italian Budget Is Not to Reassure Markets for Di Maio – The Italian Deputy Minister Di Maio said those words exactly and added that the goal is to improve conditions for Italians and they will find room for pensions reform and citizens income. Hmmm, the Finance Minister Tria was confident about a 1.6% deficit for next year’s budget, but no one believes it, close to 3% is more likely.

No Crisis in Turkey for Erdogan – We could believe that if he didn’t add that all rentals will be in the domestic currency.

Iran Doesn’t Want Other Oil Producer to Take Its Spot – Iran’s OPEC Envoy said that the US sanctions on Iran could leave a gap of 1.3 million barrels which other OPEC countries must not fill and that would increase the prices to above $80. Oil remains unchanged on the day though.

US MBA Mortgage Applications – Mortgage applications increased by 1.6% after having declined by 1.85% last month. The purchase index, the market index and refinancing index also came higher than last month.

Theresa May Rejects Barnier’s Irish Border Offer – The British PM May is said to have rejected an improved offer on the Irish border from the EU. This is an informal meeting, so if they can’t agree in principle, then there’s little hope that they will agree when the official meeting comes and that leaves us with no Brexit deal.

US Ready to Move With NAFTA Without Canada – These were the comments from the White House economic adviser Hasset. He added that the end of September is the last deadline for Canada, but it seems as though Canada might not join after all.

US Current Account Deficit – The US current account deficit decreased to $101.5 billion from $103.4 billion. Not much, but it’s a step on the right direction.

US Housing Starts – US housing starts increased to 1,282k in August, against from 1,238k expected and up from 1,168k previously. That means a 9.2% increase month-on-month.

ECB President Draghi Speaks – The ECB president Mario Draghi is holding a speech in Germany today. Unlike yesterday when he didn’t talk about the monetary policy, today he will have to since the summit is exactly about that. Let’s see where he will take the Euro today. 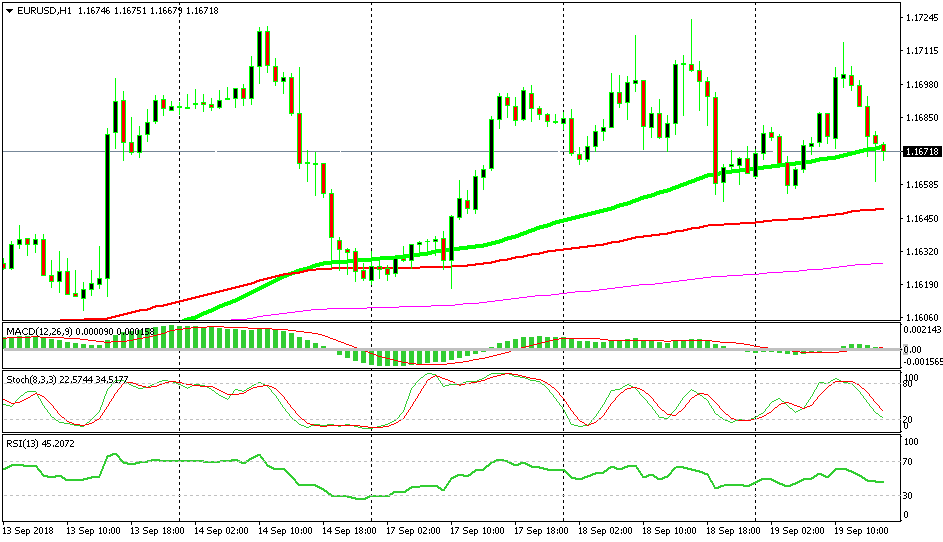 The previous candlestick is a strong reversal indicator

We went long on EUR/USD a while ago as this pair was retracing down after the bullish move in the morning. We decided to do so because the price was finding support at the 100 SMA (green) and the previous candlestick closed as a hammer which is a reversing signal. Stochastic is almost oversold, so the retrace down should be over soon, unless Draghi slaps the Euro down, which we hope doesn’t happen.

So, we are back were we started regarding Brexit. The GBP jumped on the inflation numbers but Theresa May rejected the offer from the EU regarding the Irish border so no deal so far. The ECB President Mario Draghi is speaking right now so let’s get this brief posted and concentrate on his speech.