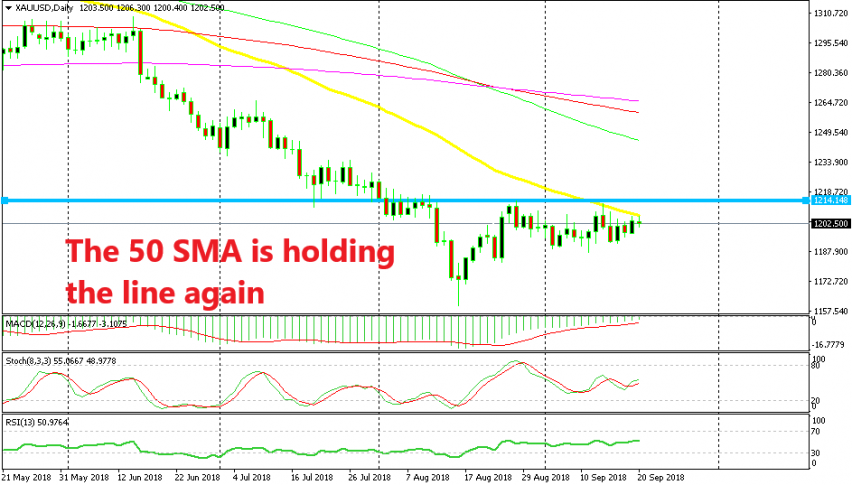 Gold has been on a bearish trend in the previous four months. It lost more than $200 during this time and as the downtrend evolved, the bounces became smaller each time. So, the downtrend was pretty strong.

But in the last month, we have seen Gold buyers fight their way back and, as a result, Gold has made a retrace higher. The major trend is still pretty bearish as seen from the daily Gold chart above. Right now, Gold has reached the 50 SMA (yellow) which is providing solid resistance on top.

It did the same thing last week. Gold failed to break the 50 SMA and the price reversed, losing around $10. But, here we are back here again. Gold buyers have pushed back up again. But again, they are having trouble breaking the 50 SMA.

So, we are thinking about opening a long term sell forex signal here. In the last month, the USD has shown weakness against all major currencies and that is the reason why Gold has become more expensive against the USD. If we compare Gold to other currencies, it is still pretty weak. So, once the demand for the USD is back, I think Gold will resume the downtrend. Just in case, the resistance line is standing there just above, if the buyers have any funny ideas.

The Uptrend Seems Over for EUR/USD, As MAs and Support Levels Get Broken
48 mins ago

USD/JPY Flirting With the 50 SMA, As Safe Havens Decline
2 hours ago