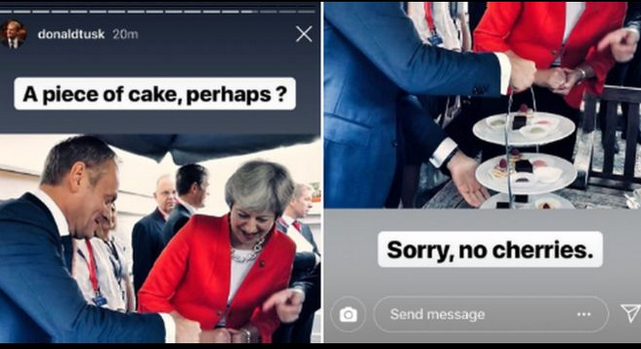 Even Donald Tusk is poking fun at Theresa May

In recent weeks and months, we have heard many positive comments about Brexit, promising an orderly exit from the EU. These comments have mainly come from the British side but also from the EU side, so they increasingly looked credible as time passed by and the Brexit deadline approached. The Irish border remained a big issue nonetheless, but we thought that both sides were pretty close to reaching a deal and the Chequers plan proposed by the British PM Theresa May was the closest and most credible plan for a deal. Today, we hear that Theresa May will have to rewrite her Chequers Plan.

We haven’t heard the EU reject it, although the failure to reach an agreement this week in the informal EU-UK meeting in Salzburg gave us a sign that the plan might fall apart. If they weren’t able to come to a conclusion informally, then the chances were slim that they would reach a formal deal. Today, May’s office denied that she was about to give a big statement, but the statement came from the Brexit Secretary Dominic Raab. He is blaming the EU for failing to reach a deal in Salzburg yesterday so everything has gone to the rubbish bin then, all these months of negotiations and positive comments from both sides. Well, back at the start, right?

Chequers Plan Dead? – There were rumours this morning from a senior UK minister apparently who said that PM May will have to write a new Chequers deal. This was the first major news today pointing to a fallout between EU and the UK.

Scotland’s Sturgeon Urges May to Drop Her Act – The Scottish MP Sturgeon commented on the situation earlier saying that PM May has to stop pretences of a Chequers deal. Guess Sturgeon knew that the deal was off.

Big Statement From UK PM May – More rumours about Brexit this morning saying that Theresa May was about to give a big statement on Brexit. This was the third sign that the Chequers Plan was out the window. Her office quickly denied the big statement rumour but the market got the idea.

Italian Government Meeting on the Budget Went Well for Salvini – Italian interior minister Salvini said that the meeting was useful and went pretty well. We still don’t know how big the debt will be for Italy’s 2019 budget.

FED to Hike 2 More Times This Year? – the rating agency Fitch sees two more interest rate hikes this year from the FED and three more next year. If that’s the case, then the FED should hike in October and in December because they’re expected to keep interest rates unchanged next week.

May Has Promised New Irish Border Proposal to Irish Counterpart – Apparently, Theresa May promised the Irish PM Varadkar that the UK will issue another proposal on the border issue to the EU and Ireland. No details from this, so we will have to see.

Brexit Secretary Blames the EU for the Failure – As always, the UK keeps blaming the EU for all its fallouts. At least, Dominic Raab accepted that the Chequers Plan has failed. He said that May was treated badly in Salzburg, quite the opposite of what we heard from European officials yesterday. He added that the EU is making noises that Northern Ireland is the price the UK has to pay for Brexit, but that is not going to happen. The EU is stonewalling UK and has tried to ambush Theresa May. It’s all coming out now, isn’t it? Although he did say that the light will shine again on EU-UK Brexit talks. So, here we are, back again at the beginning.

Theresa May to Hold A Speech – Now we are hearing rumours again that Theresa May will deliver a big speech and according to BBC sources, she will stand her ground and won’t change track on Brexit. Donald Tusk is surely making fun of Theresa May’s plan to have the cake and eat it, cherry picking for the deal.

Canadian CPI Inflation – The CPI (consumer price index) report from Canada was released a while ago and the number for August core CPI came at -0.1%. Although, the yearly numbers for core median, trimmed, and common CPI all ticked higher to 2.0%, 2.1%, and 2.2% respectively from slightly lower in the previous month.

Canadian Retail Sales – Retail sales increased by 0.3% last month while core retail sales jumped by 0.9% against 0.6% expected and up from 0.1% in the previous month, which was revised higher from -0.1%. The CAD jumped 50 pips higher on the data.

US Flash Manufacturing PMI – The US manufacturing PMI is expected at 55.1 points today, up from 54.7 points previously. The last number was revised higher from 54.5 points. Last month was expected at the same level, but it missed, so let’s see how today’s numbers will be. 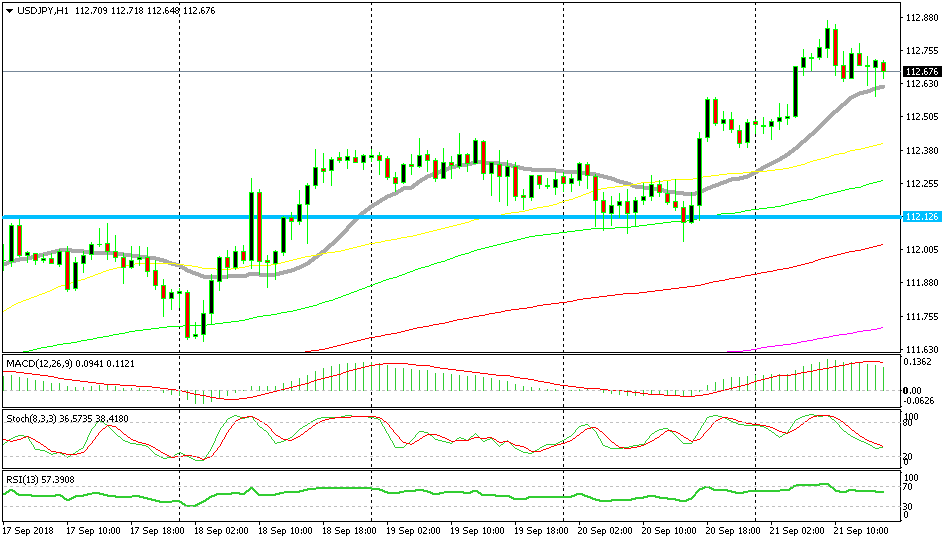 We just opened another buy signal in USD/JPY after the successful trade we had in this pair yesterday. The chart setup is pretty much the same. The trend in this pair is bullish, so the bearish move today is just a retrace of the bigger uptrend. Stochastic is almost oversold on the H1 chart, so the retrace is almost complete. Besides that, the 20 SMA (grey) is providing support at the bottom. The last two H1 candlesticks closed as dojis which are also reversing signals.

The Chequers Plan of UK PM May has been rejected by the EU and the Brits are accepting it publicly now. The GBP has taken a massive bearish turn and it is continuing to slip lower, so be careful. Theresa May is speaking right now so let’s see what she has to say and what path the UK will take from here.