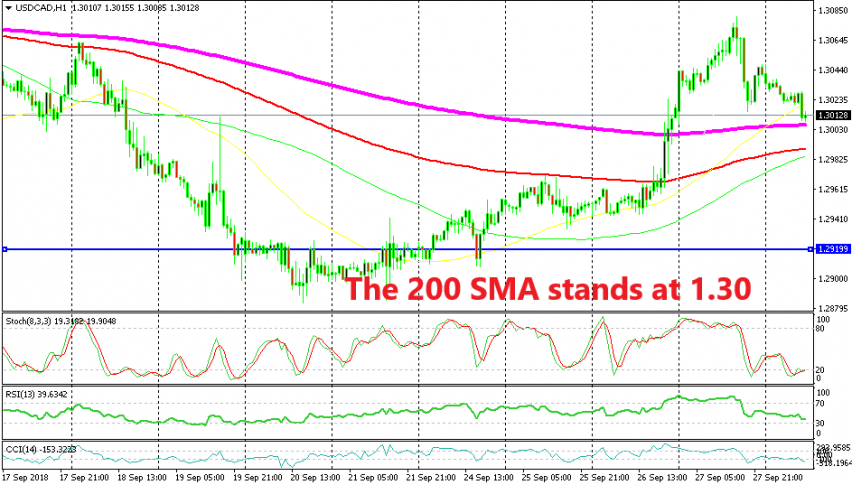 Trying to fade the retrace in USD/CAD

Canada seems to be left out of the North American Free Trade Agreement. US and Mexico are going ahead with it as Mexico caves in to the White House. Canadian Prime Minister Justin Trudeau said yesterday that Canada is likely to find a good place to join the US-Mexico deal, but that’s just wishful thinking to me because if Canada and the US didn’t come to an agreement together, how could they strike a deal with two countries at once?

By the way, we know that Donald Trump doesn’t like Trudeau and the way Canada has been run in the last couple of decades. Canada is wide open for immigration while Trump is totally against it, so there is a small battle between two different “social/political schools” happening now. This is the main reason for tariffs on Canada.

This, together with some USD strength coming from the FED, have been pushing USD/CAD more than 130 pips higher in the last two days. Yesterday, USD/CAD reached 1.3080 by midday but it reversed lower in the afternoon and it has completed a retrace lower now.

The price has retraced lower to the 200 SMA (purple) on the H1 chart. The 200 SMA stands right above 1.30 which is a big round level. It seems like USD/CAD is finding support at this moving average because it is bouncing from it right now, so we decided to open a buy signal here. Fundamentals are pointing up and so is the technical analysis, so hopefully we will get our pips soon.

The Uptrend Seems Over for EUR/USD, As MAs and Support Levels Get Broken
20 hours ago
Comments