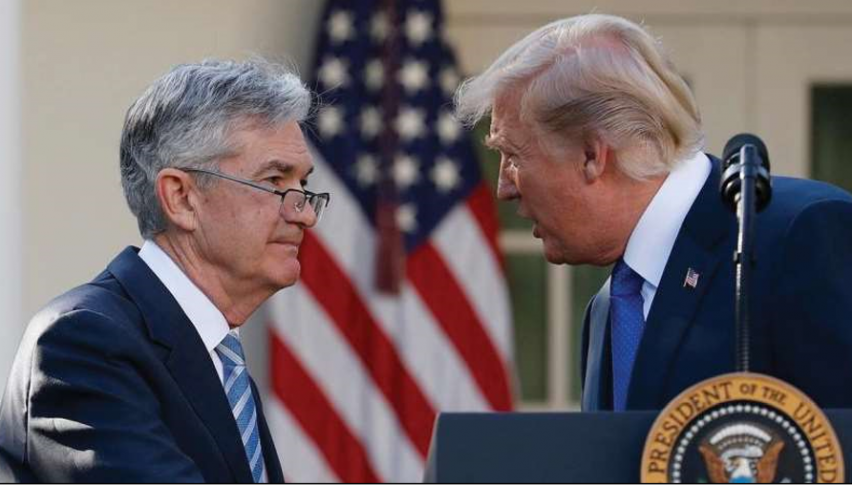 Powell has a tougher job than Yellen

Yesterday, the financial markets went through another period of panic after the small crash last Friday. The comments on the fiscal deficit in Italy for next year’s budget scared investors away and the stock markets opened with a gap lower and stretched further to the downside. Today, financial markets seem a bit confused because traders don’t know how the situation with the Italian budget will end. They have to present it to the European Commission by October 15 but listening to the comments from EU and ECB officials, you can tell that they don’t like it.

Although, it is too early to tell. Italians are sticking to a 2.4% deficit and they are trying to calm EU officials saying that they will reduce the debt for 2020 and 2021. As a result, markets don’t know which direction to take. Stock markets have climbed higher a bit as the market sentiment is not as bad as yesterday, but risk currencies such as the AUD and the NZD have been sliding lower as well, which show that there isn’t consensus in financial markets today. British PM Theresa May did her daily performance again a while ago saying that she will not let the country down, nor break it up. We know she is tough but we still don’t know what they will do about Brexit, so here we are for now.

Italy Will Reduce Debt in 2020 and 2021 – Italian deputy Prime Minister Mateo Salvini said early this morning in an interview that Italy will reduce debt and deficit in the next two years and that he doesn’t give a damn about threats by EU. The most interesting part of his interview was when he said that there is someone in the EU who is trying to bring Italy to its knees in order to buy Italian banks and companies at a low price. It definitely looks a bit like that because next year’s budget plan is for a 2.4% deficit, which is lower than the 3% ceiling that the EU has set.

European Services PMI – Italian and French services came above expectations today, but the German and Spanish services posted a decline compared to last month. As a result, the Eurozone services PMI report remained unchanged from last month at 54.7 points.

More Detailed Proposals on Irish Border Soon – UK cabinet Minister David Lidington commented on the BBC this morning. He said that the UK government will bring forward more detailed proposals for the Irish backstop. Sounds promising but unless we have something official, these will remain just words and even then, we don’t know how good these proposals will be or whether the EU will accept them.

UK Services PMI – UK services came at 53.9 points against 54.0 expected and slightly lower from last month’s 54.3 points. That was a bit encouraging for the GBP given the soft construction report earlier this week.

Eurozone Retail Sales – July’s retail sales report from the Eurozone which was published last month, showed a 0.2 decline but it was revised lower today to -0.6%. That was pretty bad but it kept getting worse as retail sales number for August came at -0.2% against 0.2% expected.

Deficit for 2019 Is Decided at 2.40% Says Di Maio – The other Italian deputy Prime Minister Di Maio commented a while ago that the deficit has been decided at 2.40% for 2019 budget, which will be voted in a few hours. He added that growth will help reduce the deficit. But, economic growth has weakened in Europe.

FED’s Evans Sees More Rate Hikes to Come – FED’s Chicago member Charles Evans said in an interview today that the FED policy stance is still accommodative and the strategy is to hike interest rates until policy becomes mildly restrictive. That is a positive comment for the USD considering that the FED removed the “accommodative” comment from the statement last week.

Theresa May Won’t Let the Country Down on Brexit – Theresa May addressed the Conservative party saying that she won’t leave the country down and no one wants a good Brexit deal more than her. She also added that her government will not betray the referendum or break up the country. It seems as though there is no plan for the Irish border, hence not breaking up the country.

FED’s Barkin Sounds Optimistics – FED’s member Barkin said in a conference in West Virginia that inflation is on target, unemployment is low and growth is solid. He added that business investment has picked up recently and it shows the pickup in investor sentiment.

US ADP Non-Farm Employment Change – Non-farm employment was expected to increase to 185k this month from 168k last month. The actual number came at 230k which is pretty good and it brings this indicator back within the trend above 200k after falling below it for several months.

ISM Non–Manufacturing PMI – The ISM non-manufacturing PMI will be released shortly and it is expected to cool off to 58.0 points. Last month, it jumped higher to 58.5 points from 55.7 previously so let’s see how today’s number will be.

More Speeches From the FED – Later today we have more speeches from FED members scheduled. Breinard and Mester are speaking at around 17 GMT while the FED chairman Bullard is speaking at 20 GMT, so brace for some action late in US session. 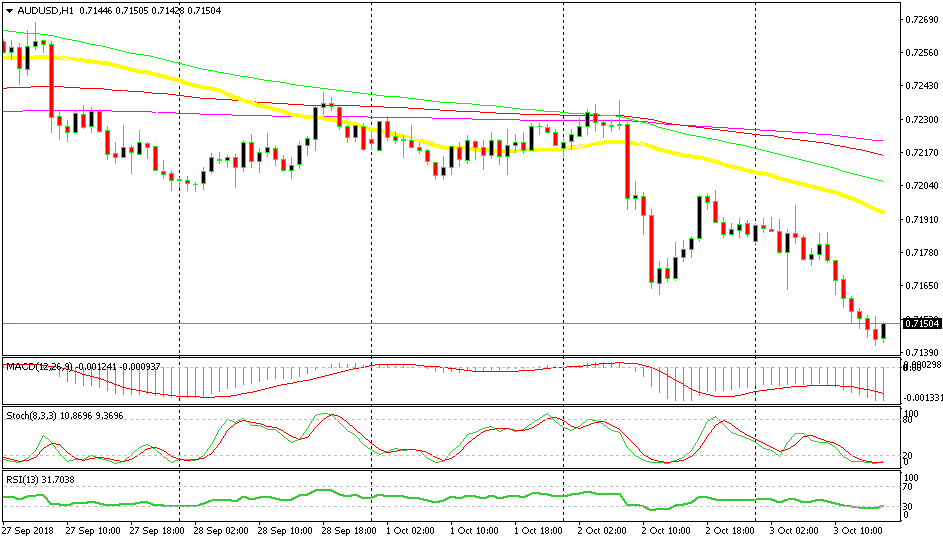 As we mentioned above, Commodity Dollars have turned bearish this week and AUD/USD is leading the way down for them. Manufacturing seems to have slowed in China, while the RBA didn’t offer much help to the buyers yesterday. As a result, we are trying to sell AUD/USD, but we will wait for a retrace higher which I don’t think will be too great since the 50 SMA is already catching up with the price.

The markets have been pretty quiet today although we can see some slight USD strength. But, there will be more action to come in the evening as FED members and the FED chairman Powell will hold speeches in late US session, so be ready for some volatility by the end of the day, guys.