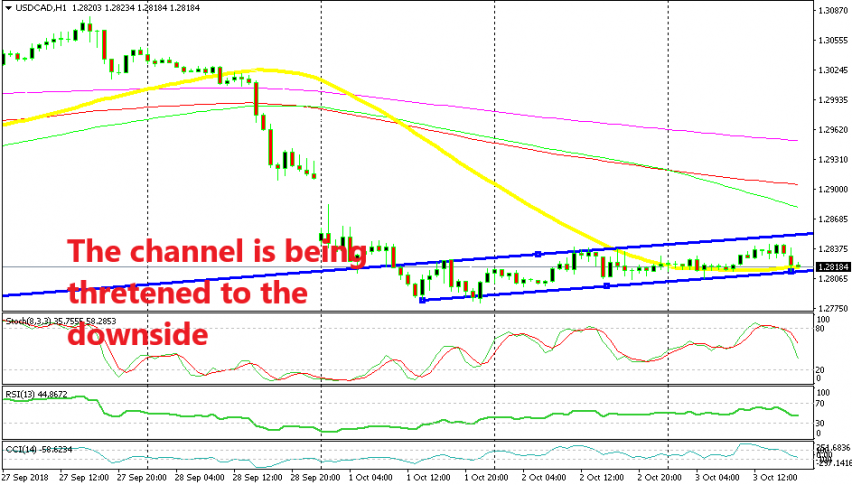 Once Resistance Now Support in USD/CAD

The 50 SMA has turned into strong support now

Yesterday we decided to open a forex signal in USD/CAD. We sold this pair as it was making a retrace higher, the first one since Thursday evening when this pair started to crash lower. Canada finally reached a deal with the US which will include it in the North American trade deal called USMCA.

That calmed some nerves and the CAD gained around 300 pips against the USD, which has been pretty strong during this period against other major pairs. So, this makes the Canadian Dollar extremely strong, that’s why we decided to sell USD/CAD.

Yesterday the 50 SMA (yellow) was providing resistance and the sellers had another go at the downside, but we missed the take profit target by a few pips. The price eventually moved above the 50 SMA last night and it seems as this moving average has turned into support now for this pair.

Right now, the sellers are trying to break below the 50 SMA again but the 50 SMA is doing a good job providing support. Besides that, the price has formed an ascending bullish channel which starts on Monday.

The lower line of the channel is adding strength to the 50 SMA which is acting as support, but I think that they will both be broken soon. US crude Oil inventories jumped higher by 8 million barrels today which should have hurt the CAD, but the CAD didn’t even notice it and it is continuing to slip lower. So, i think the break will come soon and we will get our pips.

Check out our free forex signals
Follow the top economic events on FX Leaders economic calendar
Trade better, discover more Forex Trading Strategies
Related Articles
10 Best Meme Coins That Are Set to Explode in 2022
Since the creation of Dogecoin and its sudden popularity in 2021, an increasing number of meme coins have appeared on the market. Meme coins
1 min ago