Is This The Beginning Of The Second Leg Down For U.S. Stocks?

Today is another day of no economic data in the calendar. So, the price action has to come from somewhere else, doesn’t it? The German trade balance report was the biggest economic data release today but the markets didn’t even acknowledge it. As a result, the price action has been pretty slow but there has been some motion nonetheless and it shows that the sentiment in financial markets is still negative today.

Yesterday, stock markets were pretty bearish but they managed to put up a small retrace by the end of the day and closed the day off the lows. Today, the bears didn’t wait much when the European markets opened and the bearish trend resumed again. Now, European stock markets have just broken yesterday’s lows so they look very bearish.

Comments from Italy’s Finance Minister Giovanni Tria early in the morning made forex traders jump off their chairs and start selling stocks again, as well as risk currencies such as the Euro and the GBP. European officials were relying on him for some support from inside the Italian government in order to reduce next year’s deficit which is set to be at 2.4%, but he decided to stick by his government and confirmed that the budget deficit for 2019 will be at 2.4%. The decline in stock markets doesn’t seem to stop now.

China Will Not Yuan As A Tool on trade Dispute – This were the comments from the Chinese Foreign Ministry so it seems that the Chinese are trying to look like the decent guy in the room. USD/CNY is still at the highs nonetheless, flirting with the 7.00 level.

Giovanni Tria Pretty Vocal Today – The Italian Finance Minister said early today that the economic growth gap between Italy and the EU is unacceptable, the deficit for 2019 will be at 2.40% and the budget is aimed at answering concerns of citizens. He popped up again later saying that the deficit forecasts are not shocking and higher bond yields are due to uncertainty, not due to fundamentals. Tria commented again just now saying that Italy is one of the few nations with primary surplus and if there is a financial crisis, Italian government will do whatever it takes to keep yields in control, just like Draghi.

UK Has Made Progress on Financial Services regarding Brexit for the BOE – The Bank of England released its latest FPC statement where I saw comments such as the one above. Although, they were concerned regarding the growth of lending leverage to UK firms. We don’t need another Lehman Brothers collapse.

Italy’s Conte Is Confident About Growth – Italian Prime Minister Giusepe Conte said that the economic growth for next year should be higher than the IMF (International Monetary Fund) predicts. The IMF predicts that the GDP growth will be at 1.0% while the Italian government has projections for a 1.55% growth next year. Time will tell who is right and who is wrong.

Working Hard to De-Dramatize Backstop Says Barnier – EU’s Chief Brexit negotiator Michel Barnier said that the EU is in talks with the DUP Party of Northern Ireland trying to find a solution to the Irish border issue. But the DUP leader Arlene Foster has reiterated that she won’t move from her position, so a solution is hard to get.

UK PM Spokesperson on Brexit – James Slack held a speech where he said that Brexit talks are continuing intensively, a Brexit proposal will be put forward in due course and that members of the government support Theresa May. Nothing new for the GBP.

US NFIB Small Business Index – This report was released early today. The small business index has been growing steadily since the beginning of the year and it was expected to tick higher to 108.9 points today against 108.8 last month. But, it declined to 107.9 points although it still shows decent levels of expansion.

Canadian Housing Starts – The number of buildings that began construction in September is expected to pick up slightly to 203k against 201k last month. But, we have seen four misses in the last five months from this indicator, so don’t be surprised if today’s number misses again.

US IDB/TIPP Economic Optimism – The economic optimism has been increasing considerably this year in the US apart from last month when we saw a bearish turnaround as this indicator fell to 55.7 points from 58.0 previously. Today, this indicator is expected to decline again to 54.6 points, although it is a minor data point, so don’t expect much reaction in USD pairs. 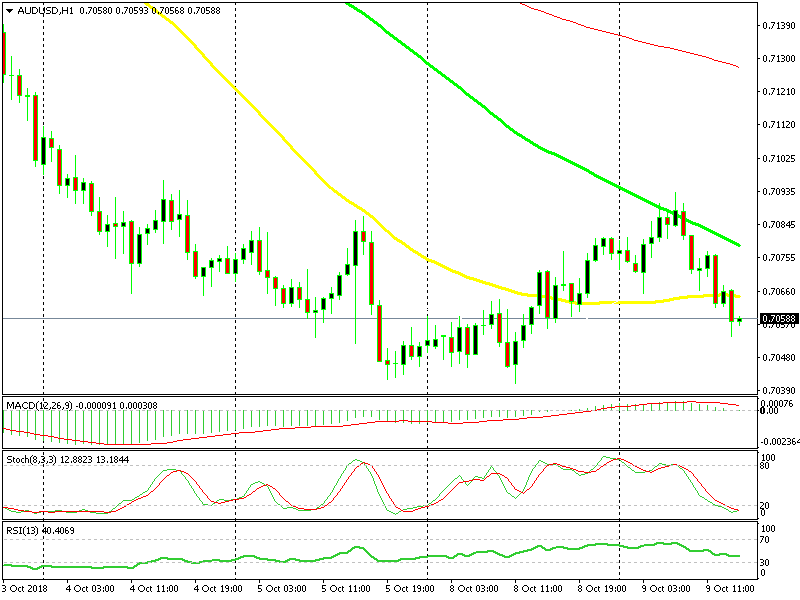 We sold AUD/USD yesterday as this pair was retracing higher after a strong downtrend which lasted for around two weeks. We were hoping that the 100 SMA (yellow) would hold its ground as resistance, but it gave way and AUD/USD moved higher. Although, we were counting on the 100 SMA (green) which did a good job providing resistance. Now this pair has reversed down. The 50 SMA turned into support as it held the ground for some time, but it broke a while ago so the bearish move is picking up pace now.

We are going through another depressing day in financial markets and especially in the stock markets. The market sentiment remains quite negative and comments from Italian officials are making things worse. Although, there is some nice price action to trade, so follow us for trade ideas guys.

A Whipsaw Post-FED Session For USD, U.S. Equities
15 hours ago