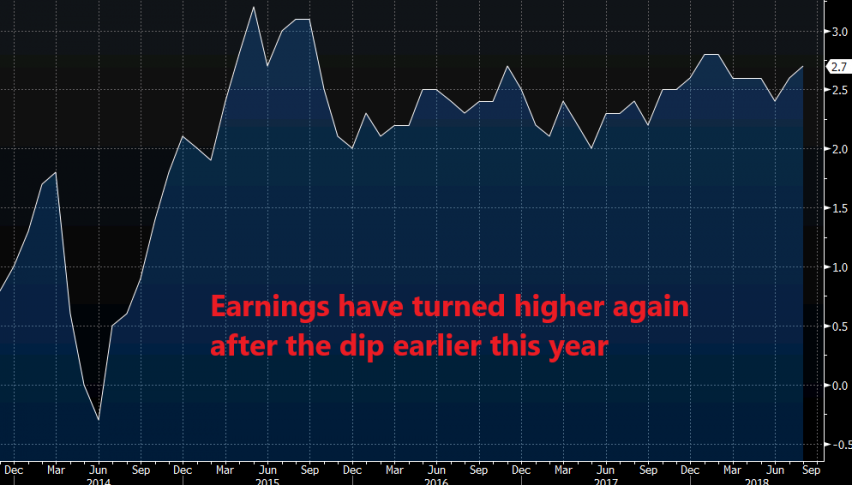 It seems like there won’t be a Brexit deal this week during the EU meeting after all, from what I’m seeing this morning. EU ministers are commenting that there might be a December meeting regarding Brexit, which tells us that they are nowhere close to an agreement now and they don’t believe for a deal by November either, so they are pushing it further into December.

This situation has been weighing on the economy as well as we have seen from the economic data in recent months. Although, the earnings are holding up pretty well, despite softening for some time earlier this year.

The average earnings index which is released on the 3M/Y format, posted yet another increase today after the one we saw last month. Last month, average weekly earnings were expected to soften from 2.5% to 2.4%, but instead, they increased to 2.6%.

Today, earnings were expected to remain unchanged at 2.6%, but they ticked higher again to 2.7%. Average earnings excluding bonuses also increased to 3.1% 3M/Y against 2.9% expected. This is the fastest increase since February this year.

GBP/USD jumped 70 pips higher immediately after this report was released. I guess, this came as a bit of a surprise. Traders were probably expecting some soft numbers considering that Brexit is heading to a dead end. But, the climb has stopped now and we might see a bearish reversal in this pair on Brexit rumours again.

Forex & Commodities Trading Levels to Watch on Thursday
20 mins ago

USD/JPY Flirting With the 50 SMA, As Safe Havens Decline
15 hours ago