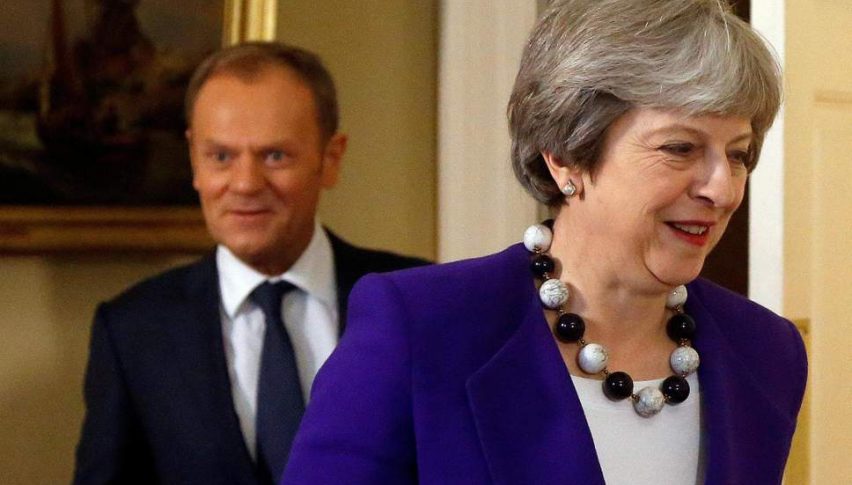 Theresa May leaves the EU summit with no deal

Financial markets have been sort of hectic in the last few weeks. Yesterday, the forex market sided with the US Dollar in anticipation of the FOMC minutes from the last FED meeting two weeks ago. Just like the market was expecting, the FOMC minutes looked pretty hawkish. Most FED members pleaded to keep hiking interest rates for quite some time until the policy becomes more than neutral. This reinforces the point of view that the FED will remain hawkish in the mid-term.

So, the US Dollar made considerable gains across the board last evening, especially against the JPY which has received strong bids recently due to deteriorating market sentiment. But, the storm is not over yet. Financial markets still look pretty cautious now and a negative event or even a comment might spark another fast move in either direction. You can see the uncertainty on the stock markets. They started the day on a positive note, but have reversed back down now, which means that traders don’t really want to take any major positions until things become clearer. Gold has been trading in a tight range which again highlights the uncertainty and caution in financial markets.

Salvini for President in the European Commission? – The Italian Interior Minister Matteo Salvini is said to have a shot at the post of the President for the European Commission on next year’s election, replacing Juncker. They are totally the opposite and that would make things very interesting for Europe if Salvini is to win. Although, chances are that a German or French will take that spot, but you never know.

Germany Wholesale Price Index – The wholesale price index increased by 0.4% this month against 0.3% expected. Although, the annualized price index declined to 3.5% from 3.8% previously.

Italian Budget Plan Very Beautiful for Conte – The Italian Prime Minister Giuseppe Conte said that he had a cordial meeting with Merkel, adding that the budget plan is very beautiful and it helps GDP growth.

ECB’s Rehn Speaking on Brexit and On Monetary Policy – ECB member Olli Rehn said that risks of no-Brexit deal have increased lately. He added that he sees the first rate hike from the ECB in Q4 2019. This should weigh on the Euro in the coming months, but we have to get confirmation from other ECB members.

UK Retail Sales – Retail sales were expected to decline by 0.4% in September, but they declined by twice as much. Retail sales fell by 0.8%, but at least, last month’s number was revised a tick higher to 0.4%. Not much reaction in the GBP as Brexit worries prevail right now.

Growth Estimates in Italian Budget Are Conservative for Tria – Italian Finance Minister Giovanni Tria delivered these comments adding that the goal is to cut debt/GDP ratio by 4.5% in the next three months. But, the EU and the IMF think that growth estimates are very optimistic. Only time will tell who is right.

May Wants Extra Time As the EU Appears to Be Throwing the Towel – Theresa May and another senior UK official mentioned today that an extension period might be required. It seems like the UK government is getting scared they might end up with a no-Brexit deal as the EU appears to be getting tired of this. On the other hand, Theresa May is likely to get overthrown by her own party if this will be the case.

US Philly FED Manufacturing Index – Philly FED manufacturing index increased to 22.9 points last month, from 11.9 points in the previous month. This month, it was expected to cool off again and fall below the 20 level, but the actual number came at 22.2 points which leaves US manufacturing at the same levels as last month. Although, some of the components were weak, while employment remained pretty strong again.

US Unemployment Claims – Last month’s US unemployment claims were revised 1k higher to 215k, while this month, they were expected at 210k. They came slightly higher at 211k but pretty much in line with the recent months, so no change here.

Canadian ADP Non-Farm Employment Change – Canadian non-farm employment increased by 28.8k this month. The interesting thing with this indicator is that it has been revised considerably higher every month this year, so this month’s number could look even more positive next month.

EU to Reject Italian Budget? – EU’s Moscovici said to hand a letter to the Italian Finance Minister raising concerns about next year’s budget according to Reuters. It seems like the EU will turn down the Italian budget plan for next year.

US Housing Starts – US housing starts was expected at 1.22 million, down from 1.27 million last month. Although, the actual number came at 1.20 million which brings us back to the trend we saw in July and August.

Bullard With Dovish Comments Again – St Louis FED President Bullard said a few minutes ago that weak inflation means that the FED doesn’t need to hike interest rates further. He said that the current monetary policy is just about right. These are dovish comments after last night’s hawkish minutes, but Bullard is a dove, so these comments are not that surprising. 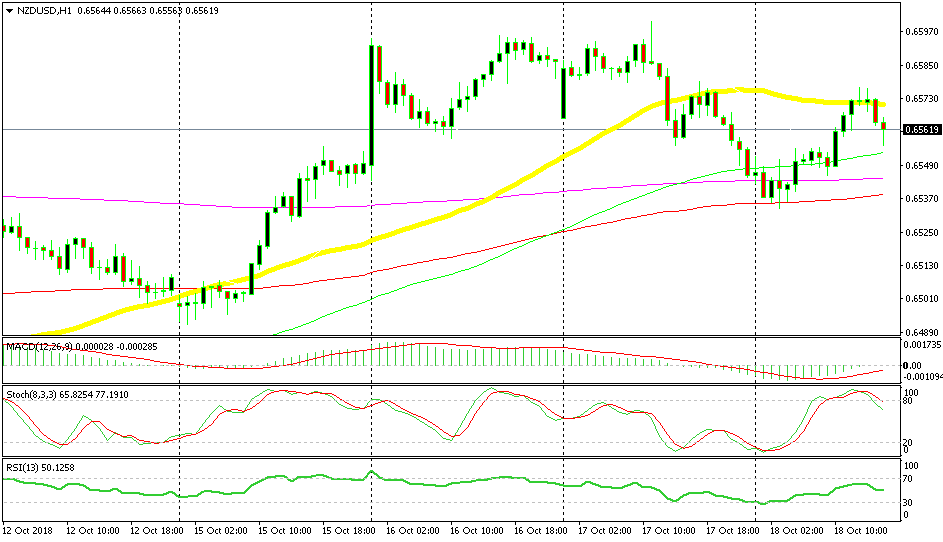 We decided to sell NZD/USD a while ago today. This pair has been in a major bearish trend in the weekly and monthly charts, but it has put up a decent fight in the last two weeks and it has retraced nearly 200 pips higher.

Although, yesterday the short-term trend changed for NZD/USD yesterday and today it retraced higher. But the retrace seems over and this pair is overbought, as the stochastic indicator shows. The price formed two doji candlesticks right at the 50 SMA which are reversing signals, so we shorted NZD/USD.

The USD is back in demand now after a small pullback down during the European session. Financial markets are still cautious today, but there is no other event to give the markets a shock today apart from the EU summit, so we will keep an eye on that summit. And on Donald Trump’s Twitter account, for obvious reasons.

The Commodity Currencies Continue to Lead
2 hours ago