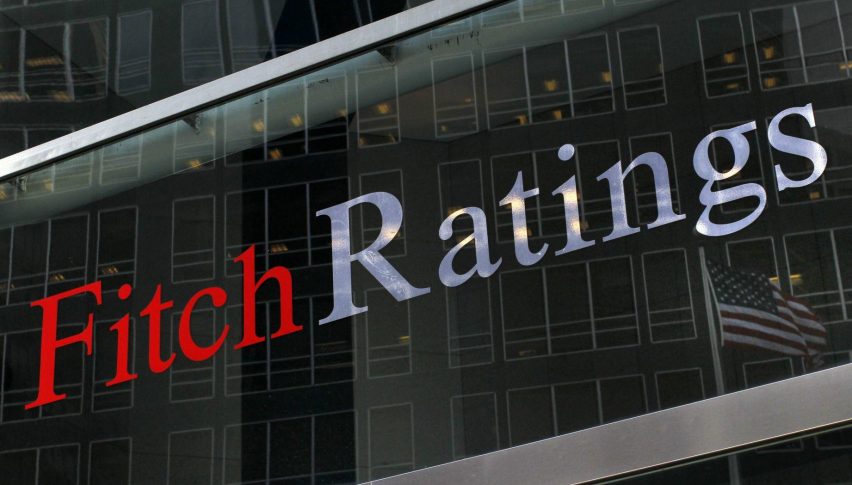 Fitch is planning to downgrade Italy and its Banks

During the first half of this week, stock markets got a break after the steep decline of the previous two weeks. They pulled back higher in the first few days of this week as the market sentiment improved a bit. But the issues that turned the sentiment negative and sent stock markets tumbling lower still remained unsolved, so the air was a bit heavy nonetheless.

The negativity was going to return again in financial markets as the EU summit approached. The summit started yesterday and the sentiment started deteriorating as comments from EU officials and European politicians made it clear that none of the two major issues were going to be resolved in this summit.

The two big issues are the Italian budget deficit for next year and, of course, Brexit. Today we had some more comments regarding these two major problems, dampening any hopes for a solution. UK Foreign Secretary commented on the Irish border backstop, but he just repeated the same words we have been hearing recently, without any solution. The UK Prime Minister has already left the EU summit which means no Brexit deal anytime soon. Rating agencies already started to comment on Italy, with comments on sovereign rating and on private banks rating, both of which sounded negative to me. As a result, the stock markets have resumed the bearish trend and are now near last week’s lows. It will be interesting to see whether they will break the lows today before we head for the new week.

EU Don’t Want A Hard Brexit Says Barnier – EU’s main Brexit negotiator Michel Barnier said early in the morning that he doesn’t want a hard Brexit. But by the likes of it, everything points to a hard Brexit at this moment.

Singapore Invites Britain – As we head into a no-deal Brexit, the Singaporeans are trying to benefit. Prime Minister of Singapore invited the UK, saying they could do a trade deal with Britain. That’s nice of Singapore, but it is too small and too far away.

UK’S Hunt on Brexit – The UK Foreign Minister Hunt repeated the same comments we have heard many times in the last few weeks. He repeated that they can support a UK-wide union for the Irish backstop but not a customs union with the EU. He added that the 27 EU countries remain united, so the UK has to remain united as well.

Eurozone Current Account – The current account of the Eurozone has been declining from above 30 billion in surplus back in May, to below 20 billion last month. Last month was revised lower to 19.5 billion from 21.3 billion but this month, the current account came 2.5 billion above expectations posting a 23.9 billion Euros in surplus.

UK Public Sector Net Borrowing – The public sector net borrowing in UK during August was revised more than a billion Pounds lower to 4.8 billion, from 5.9 billion previously thought. Borrowing in September decreased further to 3.3 billion, against 4.6 billion expected. It is a positive thing when the government borrows less; it means more cash to borrow for private companies and individuals.

Fitch Rating on Italy – The rating agency Fitch commented on Italy. They said that a sovereign downgrade in Italy would likely lead to a downgrade of a number of Italian banks as they seem to have experienced a meaningful capital decline. Some of those banks are Intesa Sanpaolo, Unicredit and BNL, and more banks are under the risk of being downgraded.

Canadian CPI Inflation – The consumer price index (CPI) inflation declined by 0.1% in August. That was the first decline in many months. Today, CPI inflation is expected to increase by 0.1%. Expect volatility if the numbers deviate from expectations by 0.2%. There are no expectations for the monthly core CPI, but it increased by 0.1% in the previous reading.

US Existing Home Sales – US existing home sales have been declining from 5.46 million in April, to 5.34 million n August. They are expected to have declined further to 5.29 million in September, but let’s see how the report comes out.

FOMC Member Bostic Speaks – The FED member Bostic is about to speak in Georgia. He will speak on economic outlook and he will be receiving questions as well, so expect some volatility during his speech.

BOE Governor Carney Speaks – The Governor of the Bank of England Mark Carney is expected to speak at the Economic Club of New York. I don’t know if he will touch the economic policy, but with UK heading towards a hard Brexit, I think the market will notice right now only if he speaks about Brexit. 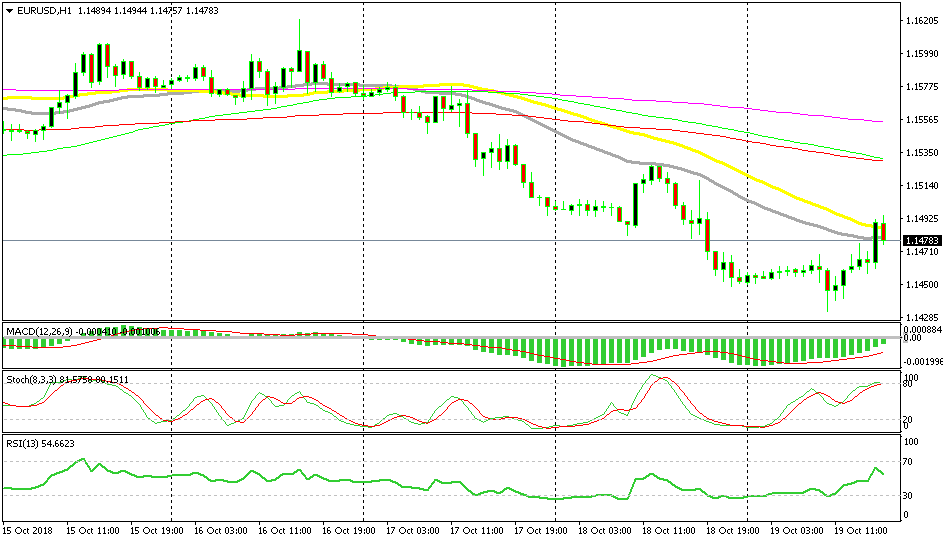 The 20 SMA has turned into resistance now

EUR/USD has been on a major bearish trend for months now. But it made a decent retrace higher last week. Although, that retrace was over by the end of last week and this week, we have seen this pair turn bearish again, losing nearly 200 pips from top to bottom.

Yesterday it made another bearish move and again this morning, but it has been retracing higher in the last few hours now. But, the retrace seems almost complete now as stochastic is almost overbought. The 20 SMA (grey) provided resistance yesterday and it is supposed to do the same today so it looks like EUR/USD is building itself up for a sell signal.

Market sentiment remains negative today as stock markets show, but we saw a small jump in the last hour, which took USD/ JPY higher as well. I can’t find anything that could have improved the sentiment, so I see this as a good opportunity to sell, don’t get fooled by such spikes.