Forex Signals US Session Brief, October 22 – Back to the Beginning After Hopes Fade - Forex News by FX Leaders 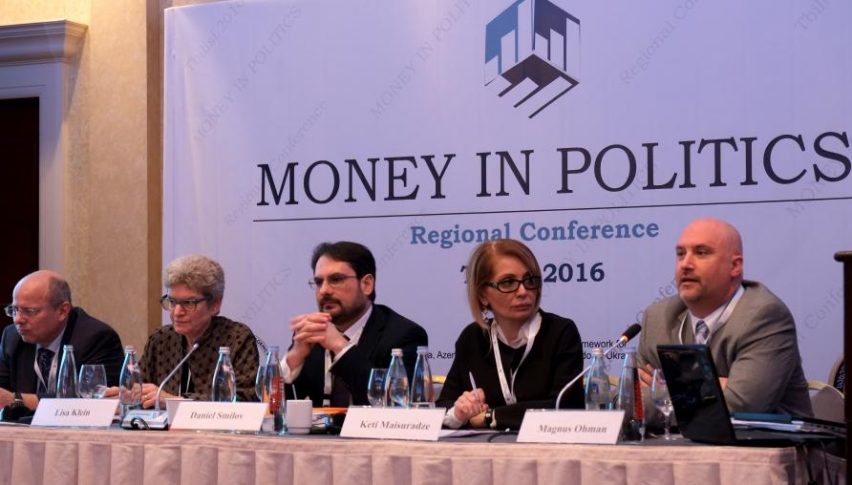 Forex Signals US Session Brief, October 22 – Back to the Beginning After Hopes Fade

The EU summit was heading towards an end on Friday afternoon last week, with no solution in sight for both major problems that the EU faces at the moment. Theresa May had left the summit without a sign of a possible Brexit deal, while the EU was standing firm against the Italian budget draft for 2019. But, a few hours before the markets closed, we heard some rumors which suggested that both problems might find a solution.

An Italian newspaper posted an article where the Italian politicians supposedly accepted to reduce the 2019 budget deficit to 2.1% from 2.4%. The British Prime Minister Theresa May also commented on Brexit, saying that she is ready to drop one of the key demands regarding Brexit, in order to open the door to a Brexit deal with the EU. We didn’t know what the key demand was, but the market assumed that the UK was going to give up the hard border between Ireland and Northern Ireland, because that’s where the negotiations are stuck.

As a result, EUR/USD and GBP/USD rallied around 100 pips higher in the evening before the forex market closed. Stock markets got the message a little late as they only moved higher this morning when the European markets opened. European stock markets opened with a gap higher and pushed some more to the upside in the first few hours. But, it was too late as the Italians decided to go ahead with the first budget draft with a 2.4% deficit, while Theresa May didn’t have in mind what the market was assuming. She was hoping for an extended transition period and a hard border following the transition period. That doesn’t satisfy Ireland, so we are back at step one now and the markets have reversed down again.

Italy to Keep the Same Draft Budget Plan – According to La Repubblica, Italy will go ahead and send the current budget draft to the EU. The EU has said to reject this budget, but Moody’s reversed last week’s downgrade of Italy’s credit rating which was just one grade above the junk status. Now, Moody’s sees Italy’s credit rating as stable.

Ireland Doesn’t Accept Hard Border After An Extended Transition Period – Everyone jumped off their chairs on Friday evening when Theresa May said that she was ready to let go off one of the major Brexit demands. But, as we now know, it is not the hard Irish border. She was talking about extending the transition period which would place a hard border between two Irelands. But, the Irish Foreign Minister Simon Conevey said this morning that an extended Brexit period cannot be an alternative for the backstop. He said there won’t be an agreement without backstop, “end of story”. So, there you have it.

Italians Will Go Ahead with Current Budget Draft – The Italian deputy Prime Minister Di Maio said this morning that Italy will send a letter to the EU to clarify reasons for the deficit target at 2.4% for next year. They are aware that the budget is not in line with EU demands, but they are willing to negotiate.

Extension of Brexit transition Just An Idea – Spokesperson of the UK PM May made these comments, saying that May had Brexit phone calls with the cabinet. It seems that the Conservative Party is not backing the idea of an extended Brexit period and that she might be voted off from her own Party this week in a vote of no confidence.

DUP Party to Back Tories Effort to Make the Backstop Illegal – The North Ireland party in coalition with Theresa May is said to be backing the effort by some Tory MPs to make the Irish backstop illegal. If it gets voted, it goes into effect immediately and it will bring more headache for Theresa May. Then, the UK will end up with no deal for sure.

Iran Trying to Play the Bluff – Iran’s Oil Minister said today that Saudi Arabia and Russia have no capacity to pump more Oil in order to make up for Iran. Their output is near highs so there is no replacement for Iran’s Oil. Oil is near $1 down from the highs today.

Canadian Wholesale Sales – Canadian wholesale sales were expected to increase by 0.1% today after they jumped by 1.5% in the previous month. Although, that was revised lower to 1.1%. This month, wholesale sales declined by 0.1% instead. This another negative economic data release after the horrible inflation and durable goods orders that we saw sales last Friday. Bank of Canada is expected to hike interest rates again on Wednesday, but given the recent negative numbers, the future of the rate hike path seems in jeopardy.

Chicago FED National Activity Index – This index was expected at 0.22 points but came at 0.17 points. It still remains above 0 which is the flat level. Although, last month was revised higher from 0.18 to 0.27, so today’s number might be revised higher as well next month.

DI Maio Trying to Convince the EU Again – The Italian deputy Prime Minister Di Maio has popped up again saying that there is plenty of time to discuss the budget even if the EU rejects it. He added that the increase in Italian bond yields is because the market thinks Italy might leave the Euro area, which is not true. He is trying to calm financial markets down. 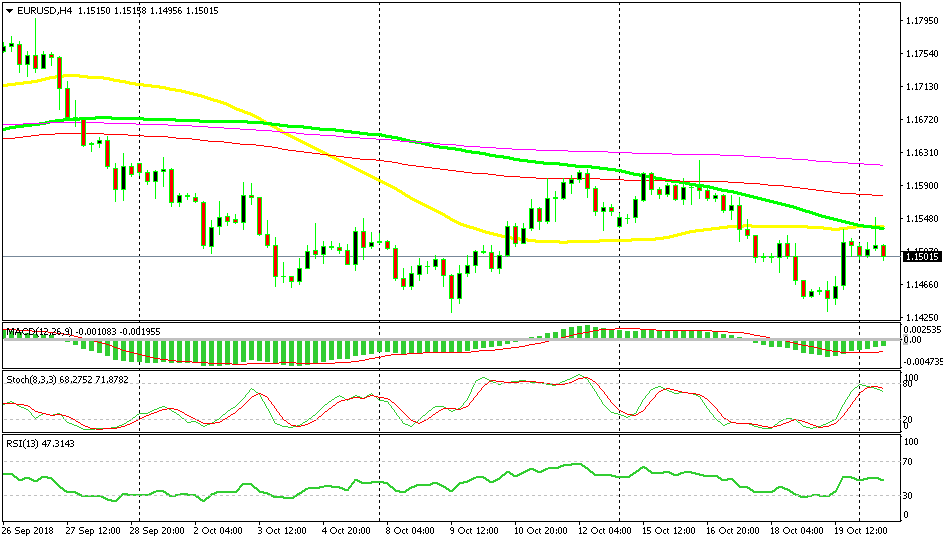 The 50 and 100 SMAs have turned into resistance now

EUR/USD has been on a major bearish trend for months now. But it made a decent retrace higher last Friday. But, the retrace is over now as EUR/USD has made a bearish reversal after buyers failed to push above the 100 SMA (green) and the 50 SMA (yellow) on the H4 chart.

The stochastic indicator is now overbought and turning down, while the previous H4 candlestick formed an upside-down pin-doji, which is a reversing signal after the retrace. Now, everything looks bearish for EUR/USD.

So, here we are in the same position as last week. No breakthrough in the Brexit process yet and the Italians are not reducing next year’s deficit. The USD is back in demand after retracing lower and the market sentiment is back to negative. But, any comment about Brexit or the Italian budget might reverse the situation pretty quickly, so be careful when trading.