The US Dollar During Donald Trump’s Presidency, FED Changes and US Mid-Term Elections - Forex News by FX Leaders

The US Dollar During Donald Trump’s Presidency, FED Changes and US Mid-Term Elections

The US mid-term elections are approaching. These are the most interesting/important mid-term elections in a few decades, I suppose, and the odds are high that there will be a lot of volatility during the elections. If you remember, during the last elections in 2016, the USD lost around 150 pips initially on the next day as the votes were coming out and the now President of US Donald Trump was moving ahead. This was the first shock reaction to the idea that Trump might actually win after polls were showing him way behind Hillary Clinton.

Then, as it became apparent that Donald Trump was winning, market analysts got over the shock and started analyzing the situation from a fundamental perspective such as economically. Donald Trump had promised tax cuts for the middle class and fiscal stimulus. This was going to help the US economy improve further, increase inflation and as a result, force the FED to hike interest rates, in a few words.

The USD reversed soon that Monday and continued further up, gaining nearly 10 cents until the end of the year. Then, Trump came along and he made it clear he didn’t want a strong Dollar. He bashed countries which he thought manipulated their currencies to make them weaker such as China and the EU – but actually meaning Germany, Switzerland, etc. So, the USD reversed again at the beginning of last year and entered a major bearish trend.

If the President wants the Dollar weak, the Dollar falls. It continued falling for more than a year, as Trump continued talking the USD lower and got rid of Janet Yellen as the FED Chair, appointing Jerome Powell as the Chairman of the Federal Reserve. Powell was going to be a low interest rate guy, as Donald Trump said it out loud this week, but the market already knew what he had in mind when he blamed Yellen for hiking interest rates and removed her eventually. The USD dumping went on until the beginning of this year, late Winter-Spring I would say. The US Dollar lost around 22 cents during this time. 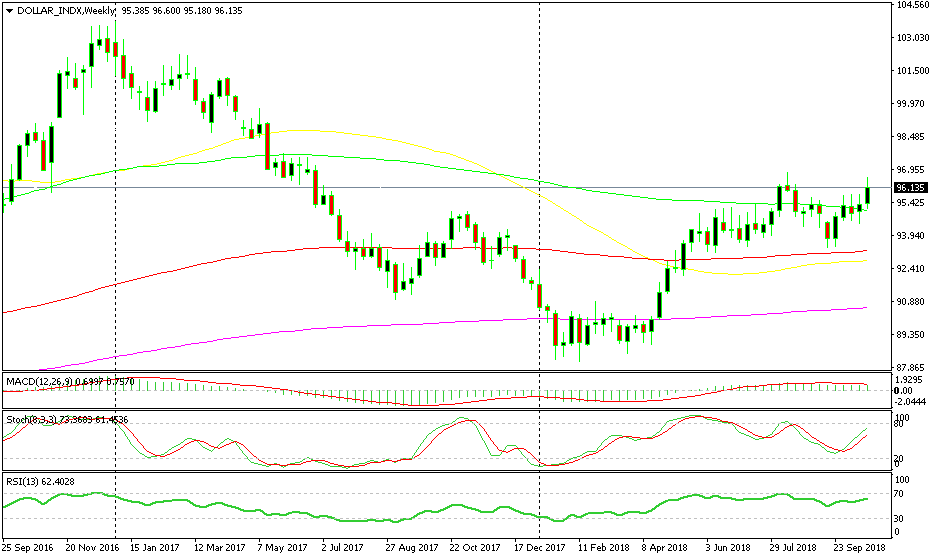 But, the situation didn’t change. In fact, the monetary policy path has been the same during Yellen and, after she left, during the reign of Jerome Powell. The market was thinking that Powell would be “a low interest rate guy” to Trump and keep the rate hikes slow, but Powell hiked rates immediately when he came and he has increased them three times by now, with another rate hike priced in for December. The Dollar reversed again in March and it has gained around 12 cents since then.

Now here we are, before the mid-term elections and Donald Trump is likely to get reconfirmed again in the Senate, but the House of Representatives is where the battle will be. If Democrats regain control of the Congress Trump might get impeached and the remaining two years will be difficult to pass through major legislation. Democrats need to win 24 seats to get the majority, when 39 Republicans are not re-running this year, some of them being anti-Donald Trump.

But, can Democrats actually win the Congress or will they lose even more seats? Some polls I saw just now place Democrats ahead. But, polls are so outdated now, especially in the UK and the US. All the polls in the world said that Britain would vote to remain in the EU, albeit by a close margin, yet the Brexit side won. The situation was even more ridiculous during Trump’s election. Hillary Clinton was ahead by a large margin, but Donald Trump swiped the table winning the majority and becoming the President of United States.

People are scared of being called racist or whatever other epithets some people and the media might attach to them, so we can’t really trust the polls now. But, the US economy is in a pretty good shape, the tax cuts have had some effect on the average US citizen, and Trump has promised more tax cuts. So, if US citizens voted for Trump economically two years ago, they will do the same now.

Regarding international politics and immigration, Donald Trump has taken some firm steps towards the UN, economic and political adversaries across the world such as the trade war with China and the remaking of NAFTA with more favorable terms for the US, which is now called USMCA. So, even at the international stage, he is at a better place. One thing to observe during this week will be the caravan of immigrants that has departed from Guatemala with 4,000 people, but has bubbled to around 20,000 or more now and is in the south of Mexico. Trump hasn’t built a wall as he promised yet, but he has taken a tough stance on immigration, so if the caravan doesn’t reach the US border until the election day, then US voters might vote for Trump as he is seen as the guy who is more likely to take care of immigration. That would be positive for the US Dollar as it leaves the status quo for the US, with the economy improving and growth beating expectations while rate hikes keep going up as well.

If the caravan reaches the US in the next few days and the situation at the border aggravates, then there might be some use of force and media coverage and Trump might lose support as we saw during the family separation situation. If Trump loses the Congress, then the USD is likely to turn bearish. Losing Congress would mean trouble ahead and an uncertain future for fiscal policies, which would weaken the US Dollar. Ironically, that’s what Donald Trump wants after all, a weak Dollar, doesn’t he?

Inflation Picks Up in UK, Whilst Remaining Subdued in Europe
1 hour ago