Forex Signals US Session Brief, October 31 – Stock Traders Like to Take a Risk for Halloween - Forex News by FX Leaders 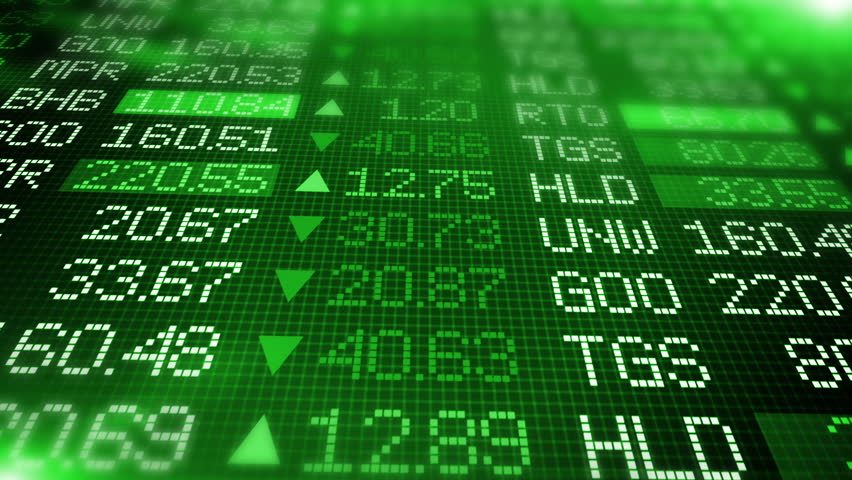 Forex Signals US Session Brief, October 31 – Stock Traders Like to Take a Risk for Halloween

Are The Stock Market Bulls Out Of Quarantine?

Today, the economic numbers from Europe and Asia were mainly negative. If you check the economic calendar, you will see that almost all figures during these two sessions are red, which means that they have missed expectations. It kicked off with Australian CPI inflation coming at 0.4% against 0.5% expected, hence the decline in AUD/USD overnight. Then we saw some weak retail sales, inflation and GDP numbers from Europe during the European session.

Although, the stock markets ignored the economic data completely today as they opened with a bullish gap higher this morning and continue to push higher, albeit slowly. The sentiment in financial markets has been positive as well, unlike what we have seen in the recent weeks. Risk currencies have been climbing higher during the European session while safe haven assets, such as the JPY and GOLD are under selling pressure. Maybe it’s just the month end cash flows that are messing with the markets or perhaps forex traders are feeling more adventurous for Halloween.

German Retail Sales – Retail sales were expected to grow by 0.5% in Germany during September, but instead, they only grew by 0.1%. The previous month was also revised lower to -0.3% which made things worse. At least, after two negative months, retail sales grew in September.

Spanish GDP QoQ – The GDP grew by 0.6% in Q3 in Spain as expected. The GDP used to grow at 1% last year on a quarterly basis, but growth has decelerated and now we stand at 0.6% growth, but that’s not a bad place either.

Eurozone Flash CPI – Consumer price index (CPI) inflation ticked higher to 2.2% in the Eurozone while core inflation increased from 0.9% to 1.1%. The higher French and German inflation figures have affected this report as we saw a 0.1% in French CPI numbers today and an increase in Germany. The Italian inflation has affected Eurozone inflation negatively as monthly inflation fell flat at 0.0% in Italy, but the other Eurozone countries’ impact was bigger it appears.

No Substantial Changes to Change the ECB Policy for Hansson – ECB’s Ardo Hansson said today that the soft GDP numbers we saw yesterday don’t change the forecasts of the ECB. The wage growth will have a positive impact on inflation and today’s inflation numbers from Europe supported his claims.

Bond Yields Driven by Politics Not Fundamentals for Tria – Italian Finance Minister Giovanni Tria said a while ago that Italy’s budget aims to bring Italy’s growth gap with the rest of the EU. He also added that Italy never expressed intention to leave the Euro.

More From the ECB – ECB’s Olly Rehn supported Hansson, saying that the soft Q3 GDP numbers are temporary and he expects growth to pick up in Q4. He added that inflation coming to the target of the ECB. But Nowotny said a little later that the EU economy is under the impact of numerous special effects, meaning Brexit, the Situation in Italy, and the international trade war. He sees slight downward revision to ECB’s economic outlook.

Canadian GDP MoM – The economy grew by 0.1% during August in Canada against 0.0% expected. The annualized number ticked higher to 2.4% from 2.3% previously, which gave the CAD a 20 pip jump.

US Q3 Employment Cost Index – Employment cost index increased by 0.8% in Q3 against 0.7% expected. Wages increased by 0.9% in Q3 from 0.5% previously, while on a yearly basis, they increased by 3.1%, which is the biggest increase in 10 years. The FED and probably Trump will bang the drums on higher wages.

US Chicago PMI – The Chicago PMI for October came at 58.4 points against 60.0 points expected. New orders and prices paid also increased at a slower pace, but this indicator is still at a very decent level.

Not far From A Brexit Deal Says Raab – British Brexit Secretary Dominic Raab said that the backstop cannot be a permanent solution but they have resolved most of the issues and the end is within sight. GBP is 40 pips higher on those comments.

SNB Chairman Jordan Speaks – The Swiss National Bank Chairman Thomas Jordan will hold a speech on how protectionism makes monetary policy difficult. He might try to talk the CHF down and we have a sell signal in EUR/CHF, so mind his comments. 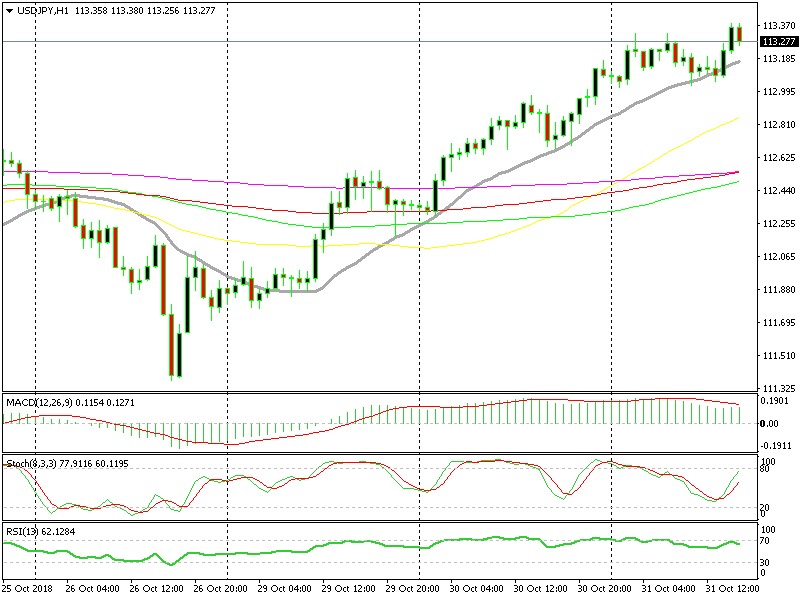 The 20 SMA has provided solid support this week

USD/JPY has made a bullish reversal several days ago and has been following a pretty straightforward uptrend on the H1 chart this week. The 20 SMA (grey) is pushing this forex pair higher which means that it is providing solid support. Every small pullback lower has been met by buyers who have resumed the uptrend and making new highs. So, we will wait until USD/JPY retraces lower to the 20 SMA and then we will think seriously about going long.

It seems that the US Dollar is in good demand today, especially against the Euro and the JPY. The market sentiment is also positive, but we will watch stocks closely and try to open a sell signal if we see signs of weakness.