Forex Signals US Session Brief, November 8 – Focus Shifts From US Elections to the FED - Forex News by FX Leaders

Forex Signals US Session Brief, November 8 – Focus Shifts From US Elections to the FED

The effect of the US midterm elections is already over now. We saw the quick USD dumping at the end of last week and another wave yesterday during the Asian session when the market realized that the Democrat Party won the US Congress as the first results started coming out. But, that second wave didn’t last long and the markets started settling down in the European session. We can see that the effect is over from the market sentiment; safe havens such as Gold and the JPY have been slipping lower, while risk assets are still advancing, albeit slowly.

Now, the attention of the markets has shifted towards the FOMC statement. The FED will release the statement in the evening today and traders are curious to see what the FED thinks about hiking interest rates again in December. Odds are that the FED will increase rates in December, which will be the fourth time this year, but it is not a done deal. So, today’s statement is expected to shed some light into that, hence the limbo in most financial markets today. We had the economic bulletin from the ECB today and some more Brexit related comments, but it was the usual stuff, nothing to move the markets. 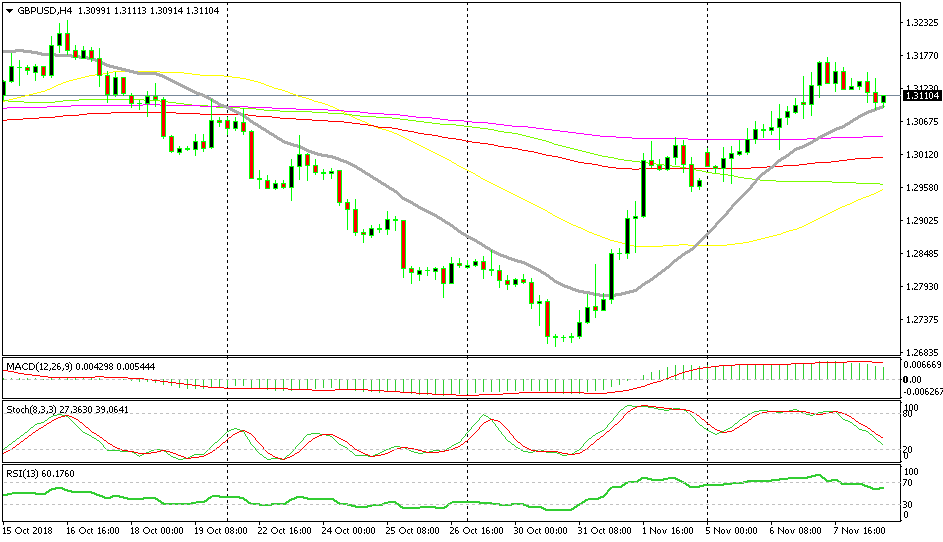 The 20 SMA finally caught up

The 20 SMA (grey) finally caught up with the price in GBP/USD now and it provided support earlier today. GBP/USD bounced off of it and is 30 pips higher from the lows now after retracing lower since yesterday. But, the stochastic indicator is almost oversold now which means that the retrace lower is complete. Now, this pair is resuming the bullish trend.

The financial markets are much quieter today and the sentiment is still positive, so if you are trading, keep the side of the risk assets and go against safe havens, but keep positions tight since we don’t expect much volatility today until the FOMC statement gets released in the evening.