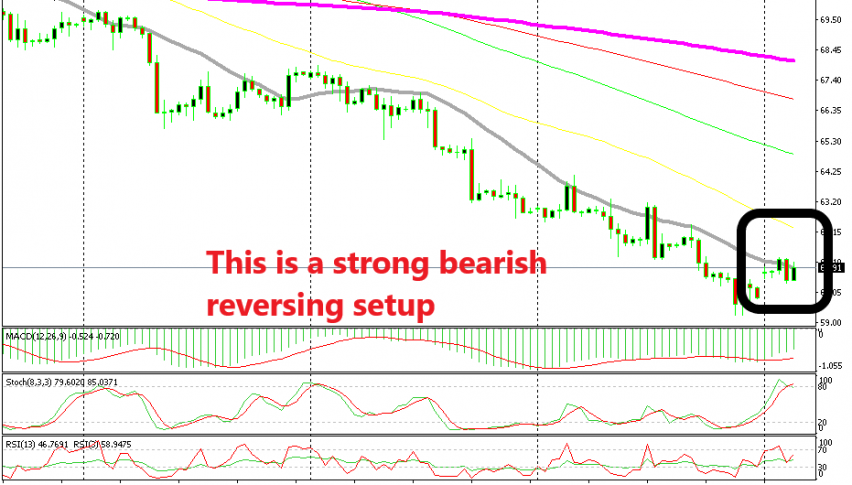 The 20 SMA Defines the Downtrend in WTI Crude Oil

Oil looks like it is about to turn bearish again

WTI Crude Oil has turned really bearish since the beginning of October after it failed to reach the $80 level. The reverse was quick and the downtrend that followed has been quite as quick as the reversal. Oil has lost around $18 from top to bottom during this period.

The retraces higher have been pretty minimal, so the bearish trend is in full force. In the first three weeks, it was the 50 SMA (yellow) which was providing resistance on pullbacks and defining the trend. In the last three weeks, the 20 SMA has taken up that job. This shows that the trend has become even stronger since the buyers are not waiting for the 50 SMA to catch up with the price.

Last night, WTI Crude oil opened with a bullish gap higher but the 20 SMA held its ground, providing resistance during the European session. As you can see from the H4 chart, the stochastic indicator is well overbought now, so the retrace higher is complete, right?

This is the perfect setup for a sell trade in Crude Oil since the history shows that all retraces have ended and Oil has reversed at the 20 SMA in the last three weeks. This time the stochastic indicator is also overbought, which increases the odds of a reversal. So, we might open a sell signal in Oil soon, therefore keep an eye on our forex signals.