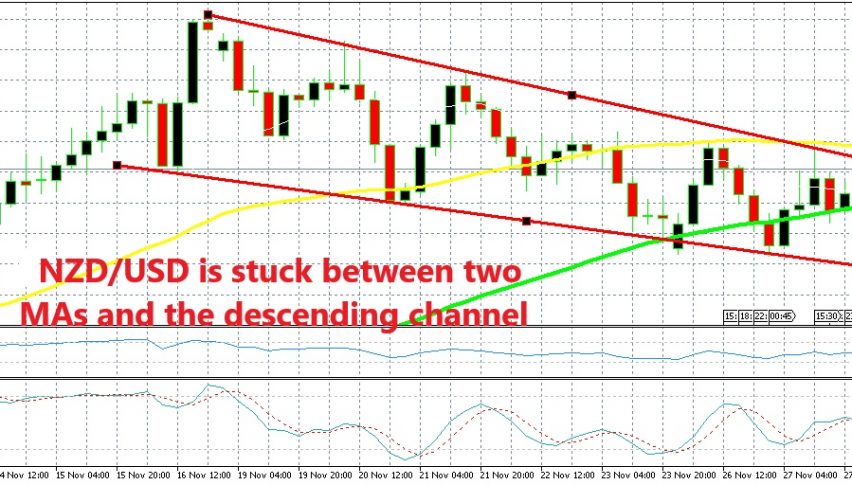 NZD/USD Trading Between Two MAs with a Bearish Bias

NZD/USD has been pretty bullish this month. It has traded on a bullish trend during this time, gaining around 350 pips from the lows up to the highs. But last week, it turned bearish and that sort of price action is continuing this week as well. Although, this might not be exactly a bearish reversal because the downside momentum is not that strong as the H4 chart tells us.

But, it is on a bearish momentum as the Buck is advancing against JPY, GBP and Euro, as well as against Gold today, so there is some buying pressure in the USD at the moment. So, while this latest move might be a retrace of the larger uptrend, it is a downtrend on the H4 chart nonetheless.

As you can see from the H4 chart above, NZD/USD has been confined within a downtrend range as shown by the red lines, connecting both the highs and the lows of the price waves. Right now we are at the top of the descending channel, so the next move should be bearish, right?

Besides, this pair has also been stuck between the 50 SMA (yellow) at the top and the 100 SMA (green) at the bottom. Again, the price is closer to the 50 SMA and the stochastic indicator is almost overbought, so the retrace higher on the H4 chart is complete. The previous candlestick also closed as a doji, which is a reversing signal.

At the same time, we see that EUR/USD and AUD/USD are climbing higher after the bearish move earlier today. SO, NZD/USD is also climbing higher and  that climb will likely be complete when the price reaches the 50 SMA. That’s where we are planning to sell this forex pair today, but bear with us until NZD/USD gets there.