Manufacturing keeps the bearish trend, heading towards contraction in Europe

Today is the first trading day of 2019 and we’ve already seen quite some volatility in the financial markets. Stock markets ended the old year on the right footing during the last few days as they closed near last week’s high. They opened with a small bullish gap and pushed higher in the first hour of trading, but they reversed lower, making it seem like they will resume the bearish trend again.

The USD was feeling pretty weak in the last few days of trading in 2018 as forex traders adjusted and closed some of the long term positions from last year. The USD has been in strong demand the entire year so it made sense to see it close the year on a bearish footing. The Buck got sold again today during the Asian session, but it started reversing early in the European session and it has gained more than 100 pips against most major currencies today, so the Buck seems to back on its feet now.

Although, the USD is still down against safe haven assets. USD/JPY lost around 100 pips today and GOLD continues to surge higher, gaining around $10 from the bottom to the top today. So, the market sentiment still remains negative in financial markets and the decline in stocks confirms it. 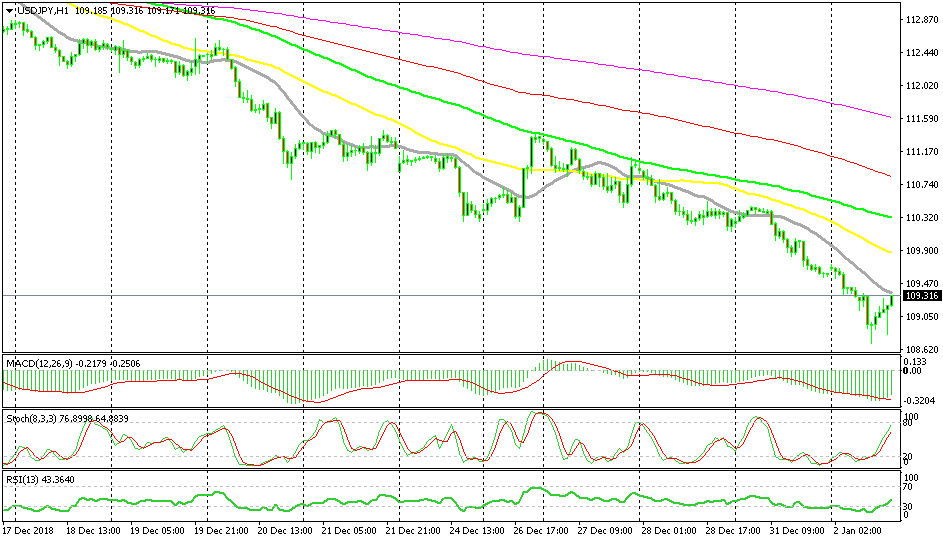 The 20 SMA (grey) is providing resistance

A while ago we went short on USD/JPY. The market sentiment has turned negative again today which has sent the JPY higher. This forex pair has been on a bearish trend in the last few weeks and the trend has picked up pace as the pair slips lower. It broke below 109 earlier today but it has been retracing higher in the last several hours. Although, the retrace seems to be almost complete now as the stochastic indicator nears the overbought area while the 20 SMA is providing resistance at the top side.

The market sentiment continues to be negative today and we are seeing some large moves once again. Although the US Dollar has found its right footing and is surging higher, don’t count too much on it because the markets are still thin on liquidity until next week when all forex traders come back from the Christmas break.