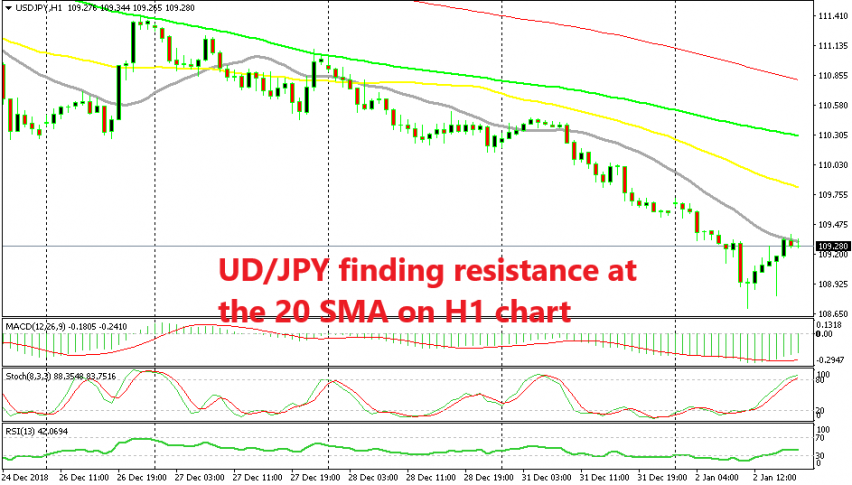 The retrace is complete for USD/JPY

Earlier today we sold USD/JPY after all the other forex signals we had opened closed in profit. The USD returned with a vengeance this year after having some difficult time in the last few days of 2018. It turned bullish against most major currencies, but not against the JPY though.

The market sentiment continues to be negative today, spilling over from last year. Stock are down while safe haven assets such as Gold, the CHF and the JPY are climbing higher. USD/JPY lost around 100 pips today during the Asian and the European sessions.

Although, every trend needs a refreshing from time to time so USD/JPY started reversing higher before the US session started and now it has completed the reverse. This pair has climbed 70 pips higher during this pullback and the 20 SMA (grey) on the H1 chart provided solid resistance.

We opened our signal a bit too early as the retrace was underway but the 20 SMA has out backs on this one. You can easily see that th downtrend is pretty strong because the smallest moving average I use is providing resistance. Now the stochastic indicator is overbought which means that the pullback is complete. The previous candlestick closed as a small upside-down hammer but it is a reversing signal nonetheless, so it looks like USD/JPY will resume the bearish trend again soon.