US Session Forex Brief, Jan 3 – Markets Calm Down After the Storm - Forex News by FX Leaders

US Session Forex Brief, Jan 3 – Markets Calm Down After the Storm

Last night, the financial markets went through a small crash. It was surprising to wake up and see that GBP/USD had dived 150 pips lower, AUD/USD had lost more than 250 pips while the champion, USD/JPY had crashed nearly 5 cents lower. European stock markets opened with a bearish gap lower, so something had happened during the night.

I went through the coverage of my Aussie colleague Rowan who covers the Asian session and saw that Apple had downgraded its revenue guidance for Q1. Apple pointed the finger at China and its economy for this downgrade in expectations. Not that they are wrong, because the growth of the Chinese economy has slowed considerably this year, but that rumor alone wouldn’t have sent the markets crashing. Thin liquidity on holiday markets is to blame for that move, as well as some large stops being triggered on the way down.

AUD/USD crashed because the Australian economy is heavily dependent on exports to China while the JPY surged as a last place to hide for forex traders since it is the ultimate safe haven. I bet the guys at the Bank of Japan must be having headaches now. They try to fix the economy and weaken the Yen to help them along, but this is out of their hands. Probably we will hear from them soon, so keep an ear on the BOJ. 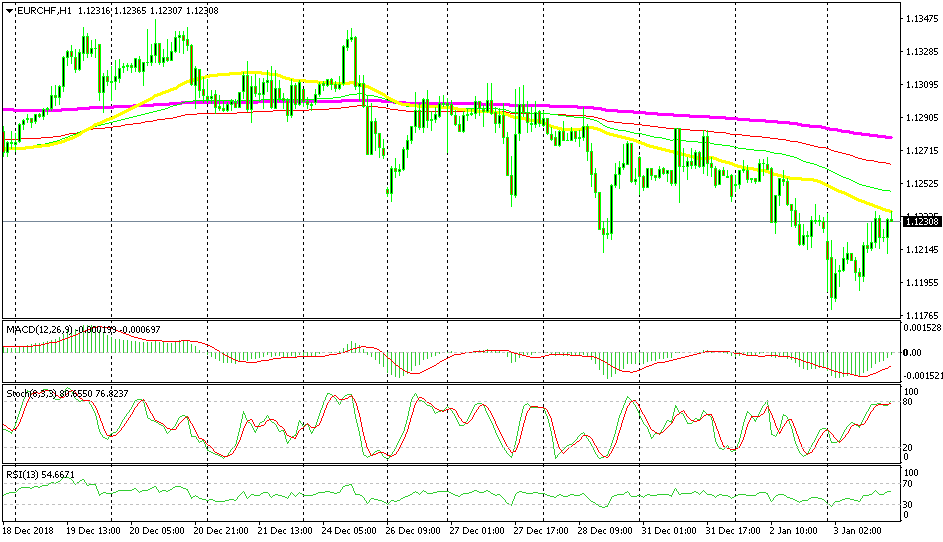 The 50 SMA (grey) is providing resistance

A while ago, we went short on EUR/CHF. The market sentiment has turned negative again yesterday which has sent the CHF higher and EUR/CHF lower. This forex pair has been on a bearish trend in the last two weeks and the trend picked up pace yesterday as the pair slipped lower. Although it has retraced higher during the European session, the 50 SMA is providing resistance on the H1 chart. The retrace higher is complete now that stochastic is overbought, so perhaps the bearish trend will resume soon.

So, another flash crash in financial markets last night, but things have calmed down now. This has ruined trading for now since most majors forex pairs are just trading the aftermath of that and not the real fundamentals and technical setups. At least, we haven’t been caught on the wrong side during that major move, but we have been careful picking trades and will be careful until this storm is totally dead.

I can not but appreciate you guys for careful analysis of the market and up to date market news. More power to your elbow. With reference to the content of your article on Brexit : ” No More Brexit Meeting Says the EU – This was the headline from the European Commission spokesperson Mina Andreeva. She added that the current Brexit deal is the best one and the only one possible, Brexit will not be renegotiated and it is now up to the British people and the British Parliament to decide. So, no concession for Theresa May then”.

In case the British parliament vote against the deal , I think that will be a serious blow on cable (GBP). Could you please from your own point of view highlight possible outcomes ?