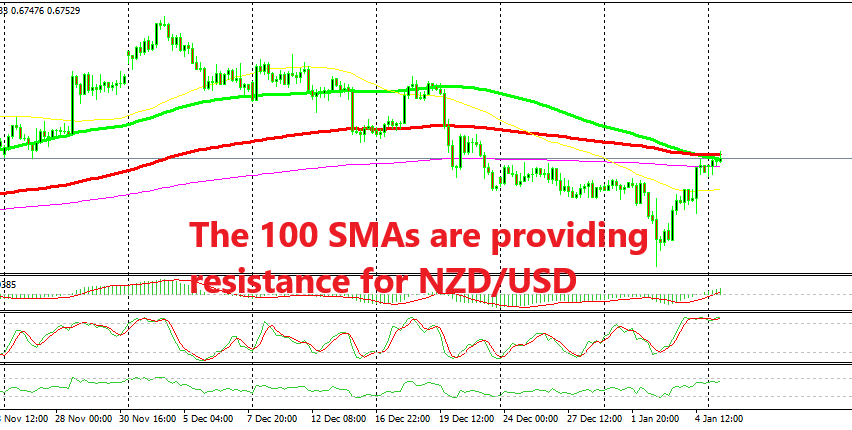 Shorting the Retrace on the NZD/USD H4 Chart

The retrace is complete for NZD/USD

The USD started the new year with a bang, gaining considerable ground against the commodity Dollars in the first trading day. But, everything reversed in the second part of last week and the USD reversed lower, while pairs like NZD/USD and AUD/USD retraced higher during this time.

NZD/USD has been on a downtrend in the previous five weeks and it stretched the downtrend further during the first half of last week. Apple’s comments on the Chinese economy gave this pair another push lower last Wednesday and this pair lost around 100 pips that day, but it started reversing higher and has been pushing up since then.

Although, the retrace seems complete now on the H4 chart. The stochastic indicator is now severely overbought on this time-frame and this forex pair has reached the 100 SMAs (green and red) which are both providing resistance on the top side.

Commodity Dollars don’t have much reason to climb to be honest, because the Chinese economy and other emerging markets are softening while the US economy is the only one performing well at the moment. But, the downtrend needs a refreshing from time to time and this seems to be it. But, now the retrace is complete and the refreshing of the downtrend is over, so hopefully the sellers will resume the bearish trend again.