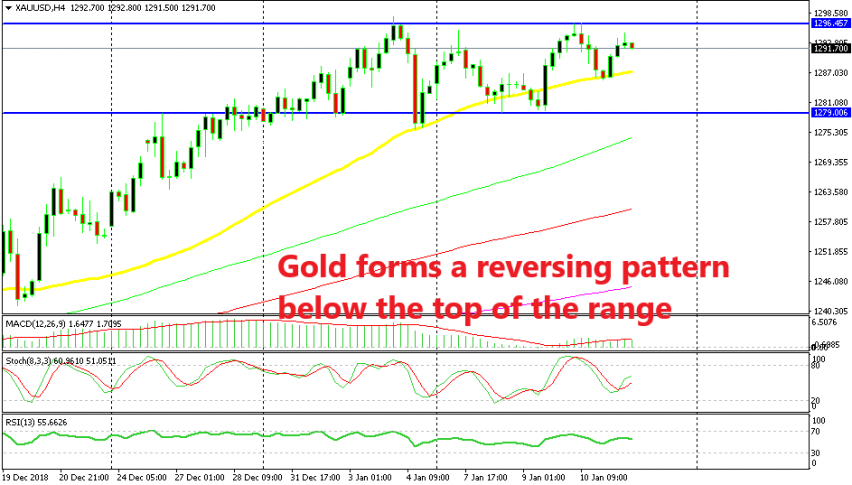 Playing Off the Top of the Range in Gold

Let's see if Gold reaches the bottom of the range now

GOLD has been trading in a bullish trend during the last two months and the uptrend has gained pace in the second half of December as the sentiment turned really negative. But, the buyers failed to break above the big round level at $1,300. This level has provided resistance several times in the last few years, so Gold traders are aware of its importance, hence the uptrend stalling right below it last week.

Since then, Gold has traded sideways and it has formed a range which is around $20 wide. The 50 SMA (yellow) on the H4 chart provided support first as Gold retreated lower, after initially failing at the $1,300 area. This moving average provided support again this week but then the zone around the $1,279-80 level turned into support and the range has now been set. We can see that buyers lose confidence when the price gets close to the top of the range. This suggests that they are not thinking about breaking the top of the range and the $1,300 level and eventually pushing the trend higher. That’s a good sign for us, since we already went short on GOLD.

Another reason why we went short below the top of the range is the fact that Gold has formed a bearish reversing chart setup on the H4 chart. Stochastic is not overbought yet, but the price has formed an upside-down H4 candlestick which is a reversing signal.

You can read the price action from such a candlestick as opening at $1,292. Then, the buyers had a go at the upside but they gave up eventually and the price reversed down and the candlestick closed near the opening level. This H4 candlestick already looks like it is going to be bearish, so that’s another confirmation, especially if it closes further below $1,290. So, this is our trade in Gold, now let’s hope that this chart setup works out as it should according to the forex textbook.

Is Gold Turning Bearish On Higher Interest Rates?
4 hours ago