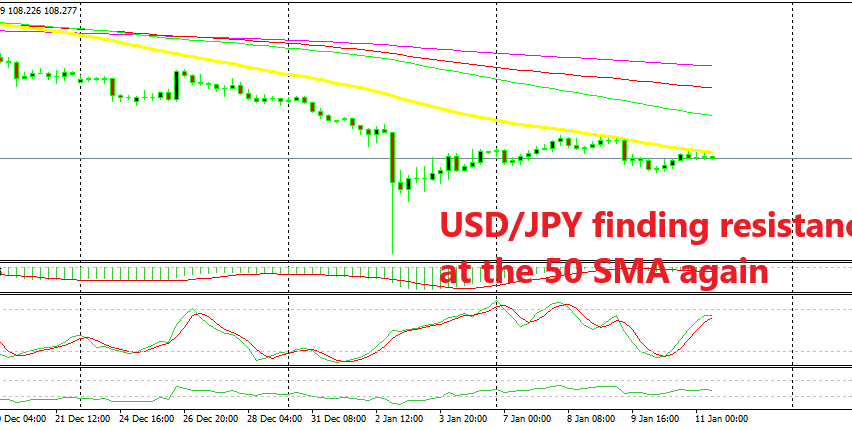 Shorting the USD/JPY Retrace at the 50 SMA

USD/JPY retraced higher for about a week after the major 5 cent tumble on the first trading day of the year. This pair recuperated 4/5th of the losses, a bit more than 4 cents during the retrace higher. But, it ran against the 50 SMA (yellow) on the H4 chart and we saw another dive in this pair on Wednesday as this pair lost more than 100 pips.

Although, it retraced higher again yesterday and it has reached the 50 SMA once again today. This moving average was coming around 50 pips higher earlier this week, at around 109, while now it stands at 108.50 and USD/JPY buyers are finding it hard to push above that level.

As you cans see from the chart above, the price has formed 2-3 doji candlesticks just below the 50 SMA which indicate a possible bearish reversal soon. The price has already slipped around 20 pips lower so the reversal might as well be underway.

Besides that, the stochastic indicator is overbought on this time-frame chart which means that the retrace higher is complete. Now we should see the bearish trend resume again for USD/JPY. Although, USD buyers seems to be on the sidelines now, probably because later in the US session the US CPI inflation report will be released, but I hope that this pair starts moving before that. We already went short from here.