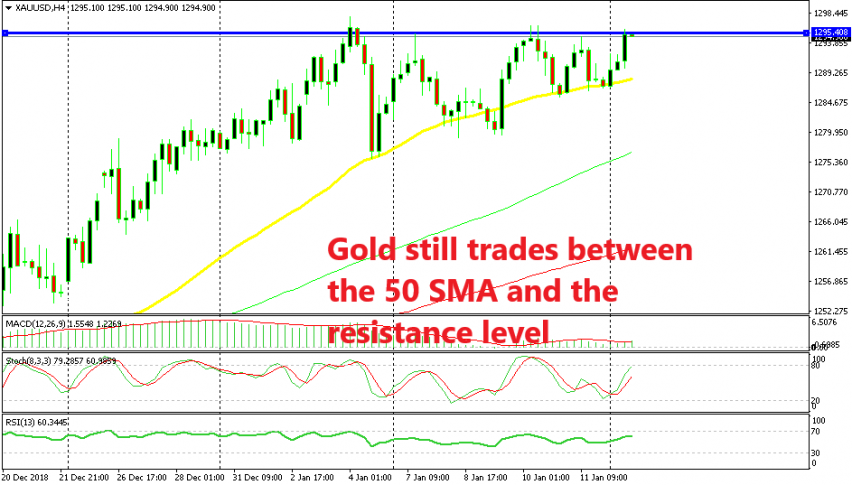 Gold Bounces Off the 50 SMA Once Again

Another bounce from the 50 SMA in Gold

Last Friday, I decided to go short on GOLD with a long term signal/trade. Gold has been on a strong bullish trend during December but it has failed to break above the big round level at $1,300 which has discouraged the buyers. They have given up on the idea to break above this level, and a resistance level has formed at $1,295.

I opened the Gold signal after the big upside-down pin candlestick on the H4 chart last Friday since it was a pretty bearish setup. The bearish setup worked well that day and the following H4 candlestick closed pretty bearish. So, the markets closed with our signal being more than 50 pips in profit that day.

But, the sellers couldn’t push below the 50 SMA and closed the day below it. That was a sign that the buyers were not done yet. Today the market sentiment turned negative again and safe havens are back in demand now. That has sent Gold nearly $10 higher today, so this is another bounce off the 50 SMA.

Seems strange that technicals and fundamentals meet at the same time; this time the sentiment reversed when Gold was finding support at the 50 SMA, but that happens pretty often in forex. Although, the resistance at around $1,295 seems to hold yet again and Gold is slowly slipping lower now.