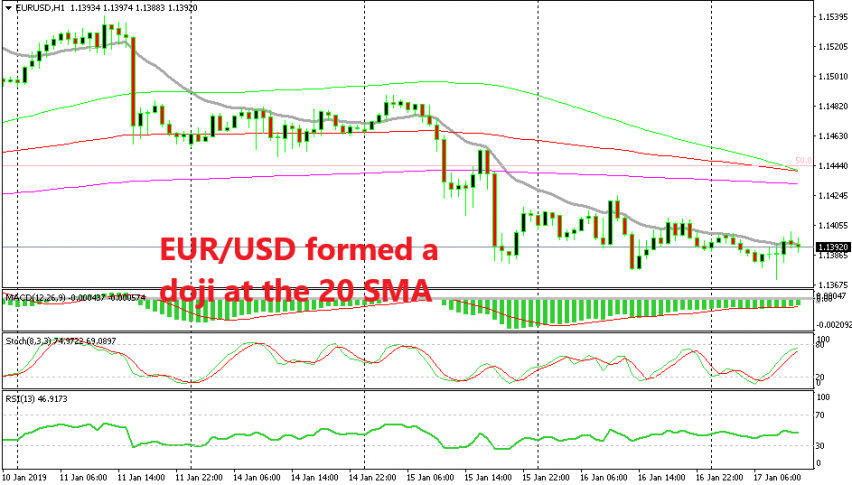 A bearish reversing signal has formed on the H1 chart

Yesterday we went short on EUR/USD as this forex pair was retracing higher in the afternoon. We waited until the price reached the 20 SMA (grey) on the H1 chart where we decided to go short from. The stochastic indicator was almost overbought on this time-frame which meant that the retrace higher was almost complete.

The price formed an upside-down hammer which is a reversing signal, so the chart setup pointed to a bearish reversal. The sellers came back after this pair moved up and down for a few hours at the 20 SMA and this morning we booked profit on our signal. Today, the chart setup is pretty similar – EUR/USD has retraced higher in the last few hours and now stochastic is almost overbought. The price is back at the 20 SMA as this moving average keeps moving lower, thus pushing the trend down.

It’s not a perfect indicator, but it is a smaller period moving average, so it doesn’t work exactly to the pip. The price formed a doji candlestick in the previous hour right at the 20 SMA, so the reversing chart setup looks set once again today. Hence our new sell forex signal in EUR/USD which we opened a few minutes ago.

Consumer Confidence Remains Negative in Europe - Does It Mean Recession Is Coming?
2 hours ago