The Relationship Has Become Too Complicated, What Do We Do Now Hun? - Forex News by FX Leaders

The Relationship Has Become Too Complicated, What Do We Do Now Hun?

Odds of a hard Brexit are rising

The UK Prime Minister Theresa May finally brought the Brexit deal that she and the EU agreed, to the British Parliament on Tuesday January 15 after she pulled off at the last minute in December as she figured out that it was going to fail it. She tried to get some concession from the EU such as legal assurance on the Irish backstop which would ensure that at some points the UK would be totally separated from the EU by a border.

She didn’t get legal assurance apart from a few worm words from the EU, so she had to finally bring that deal back, which was doomed to fail. That Brexit deal obviously got rejected in what was the biggest defeat by a sitting government. She lost 432 to 202, with a gap of 230 votes. The next day she went through a vote of no-confidence in the British Parliament called by opposition leader Jeremy Corbyn, which she won 325 to 306.

What comes next now?

The House of Commons leader Andrea Leadsom said on Thursday that the government will put forward the motion of next Brexit steps on this Monday, but let’s have a look at the possible options or paths that this process can take.

If the Brexit deal lost by a small margin, she could persuade some of the Parliament members to change their mind, but the loss was so huge that even the EU knows that can’t happen.  The most sensible and easiest thing for Theresa May to do now, is to ask the EU for an extension of Article 50 and try to figure out something with the EU that will satisfy the British lawmakers. That means dragging the process further along for a few more months.

The EU seems to be OK with that as we heard rumours from EU and other European officials before and after the Parliament vote. So yes, they can talk some more, but I think that two years were more than enough. If they didn’t find a meaningful solution during this time, I don’t think that they will find one. They can do some cosmetic changes, but I don’t think that will satisfy the Parliament. But, who know, right? Let’s hope.

Crashing Out Without A Deal

This seemed to be one of the most likely scenarios as we approached the end of last year. Negotiations with the EU were going nowhere decent to satisfy the British Parliament. No one likes the UK to crash out since it would create confusion and trade friction both for the EU and particularly for the UK. That’s not good at all considering the actual shape of the British, the Eurozone and the global economy. Eurozone and the UK economies are close to contraction, despite the European Central Bank denying it, so a hard Brexit would shock both economies and probably trigger another recession.

Although, in recent days the odds of this scenario has gone down considerably. Labour leader Corbyn has refused talks with Theresa May if she doesn’t remove the option of no-deal Brexit. The odds of a no-deal Brexit have dropped drastically, from around 70-80% in September to just above 10% now. 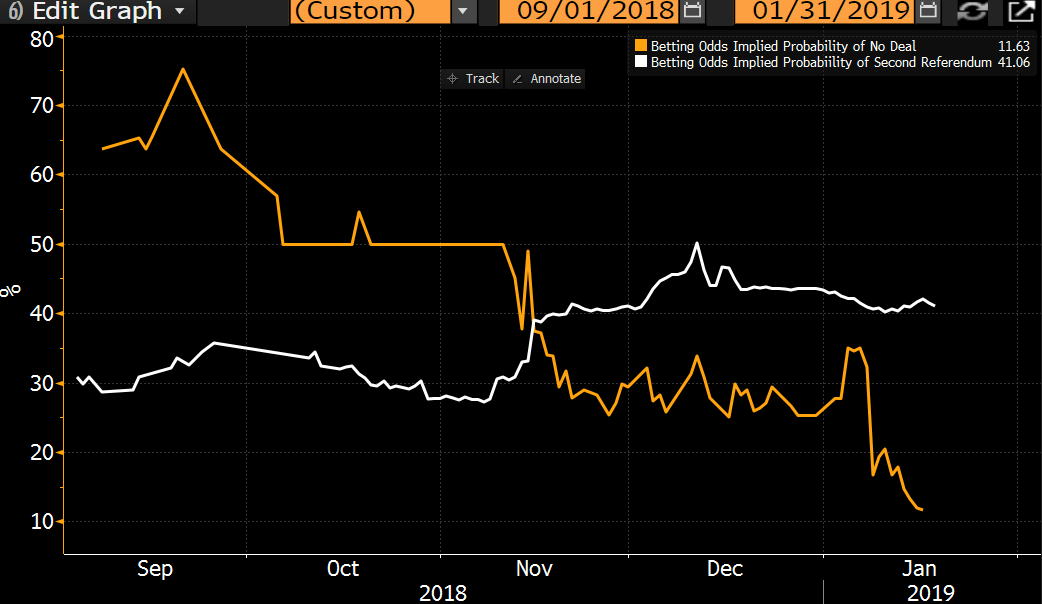 Odds for a second Brexit referendum have gone up, while those for a no-deal Brexit have declined

This is called Norway-Plus or Common Market 2.0. In this scenario, the UK would remain closely tied to the EU. Britain would remain in the single market and customs union. Those who oppose this scenario argue that this would leave Britain taking orders from the EU and it leaves open the borders for other EU citizens and possible migration.

A group of MPs have to propose a motion for this which would then require an extension of Article 50 beyond the deadline at March 29. The EU doesn’t mind extending the deadline as they have mentioned, especially in this occasion. The current Brexit deal remains unchanged including the backstop for the Irish border, but ties to the EU will be reviewed. Then it will go through the Commons and the UK will be able to leave the EU in about a year. This is great for businesses so it is a positive for the GBP.

This would leave within the border customs union with the EU. It would also prevent Britain to negotiate separate trade deals with other countries which Theresa May promised in 2016. That might be enough to persuade enough Labour MPs to pass this type of Brexit.

This would also require an Extension of the deadline for Article 50 and it is positive for businesses which would also be good for the GBP. But, it might upset some Brexiteers in the Conservative Party and the DUP Party of Northern Ireland. They might back another no-confidence vote from the Labour Party in the future and throw Theresa May off.

Taking into account the upset Brexiteers and the DUP Party, Jeremy Corbyn might ask for a vote of no-confidence and with the support of the upset MPs, they might win the vote which would lead to new general elections. Theresa May herself might ask for general elections to get a mandate from the public for her new Brexit deal. But as the snap elections she called two years ago showed that she almost lost, this time she might lose for real.

If Conservatives lose general elections, Labourers are likely to go for another Brexit referendum. It would be much easier for them to ask the public itself if they still want to go on with Brexit if they take the government, rather than going with what the mess that the Conservatives have left on.

Even if the Labour Party doesn’t get general elections, Jeremy Corbyn has promised to ask for another Brexit referendum. Some Tory MPs have declared that they would support another referendum and the government has looked into the logistics of another referendum, so they re thinking about it too. After all, this has become too complicated for everyone, so it would be better for all if the British public is asked once again.

We heard EU’s chief Brexit negotiator Michel Barnier say that the EU leaves it to Ireland to decide if they want to put anything forward regarding the Irish border issue and they will back Ireland either way, but I don’t think Ireland will propose anything apart from what’s currently on the table. They’re not willing to make any concessions, so that option is off the table.

Out of the six options above, the only one which hurts the British Pound considerably is the no-deal Brexit option because all other options wold be better for businesses than a hard Brexit. That’s the reason the GBP has rallied in the last two weeks since bottoming out at 1.2420s. Although, GBP/USD failed to break the big round level at 1.30. The price just kissed that level and reversed, although that’s a natural price action. So, the odds are that the GBP turns bullish in the coming weeks, watch out.