Let's see what the second Brexit plan will be

The forex market has been pretty quiet today and with the US on bank holiday for Martin Luther King Day, the volatility is expected to die out normally. But, British Prime Minister Theresa May is expected to publish her plan B for Brexit after the European session closes, so it’s probable that there will be some decent moves in GBP pairs towards the end of the day.

The economic data from China leaned on the negative side as the Q/Y GDP ticked lower to 6.4% from 6.5% previously, while the unemployment rate ticked higher to 4.9%. Fixed asset investment jumped higher to 5.7% from 5.4% previously, but that wasn’t enough. As a result, stock markets stared to reverse back down after trending higher for about three weeks, since the beginning of this year.

The US Dollar has seen some demand during the European session but that’s mostly because forex traders have nowhere else to turn to right now. Stocks are reversing lower while the slide in GOLD continues today as well after the bearish break last Friday. The economic data from Europe has been really light today, so let’s get going. 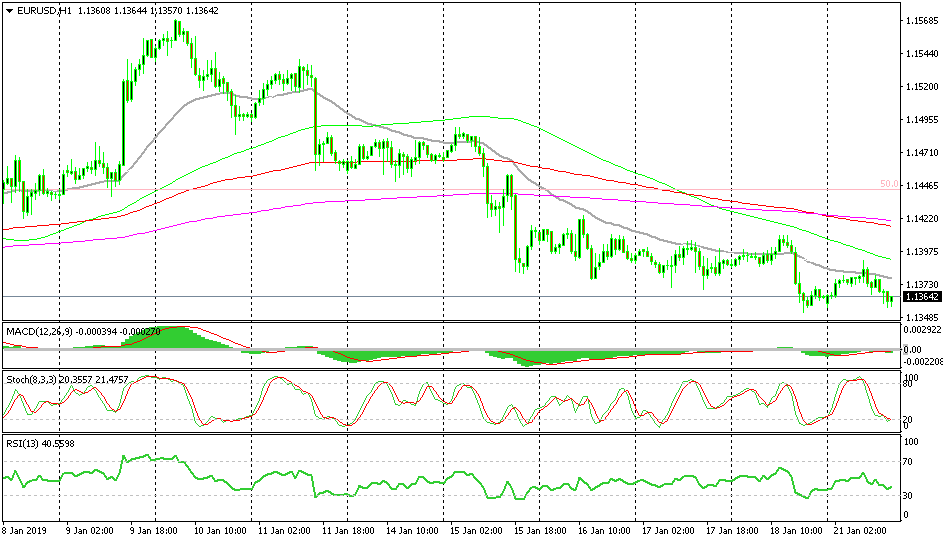 The trend turned bearish once again about two weeks ago after this pair made a retrace higher during the first week of this year on the daily chart. This morning during the Asian session and at the beginning of the European session, EUR/USD retraced higher on the H1 chart but it started reversing down after the stochastic indicator became overbought on this time-frame. We decided to sell since the pressure remains on the downside, so we opened a sell forex signal.

The action is dying out now in the forex market as we head towards the end of the European session, since the US is closed today for Martin Luther King Day. But, UK Prime Minister Theresa May will be up with a speech in the British Parliament where she will unravel her plan B for Brexit, if she has one. So, there might be some increased volatility during that time and we might see some spikes in GBP pairs, given that liquidity will be thin.

Consumer Confidence Remains Negative in Europe - Does It Mean Recession Is Coming?
1 hour ago