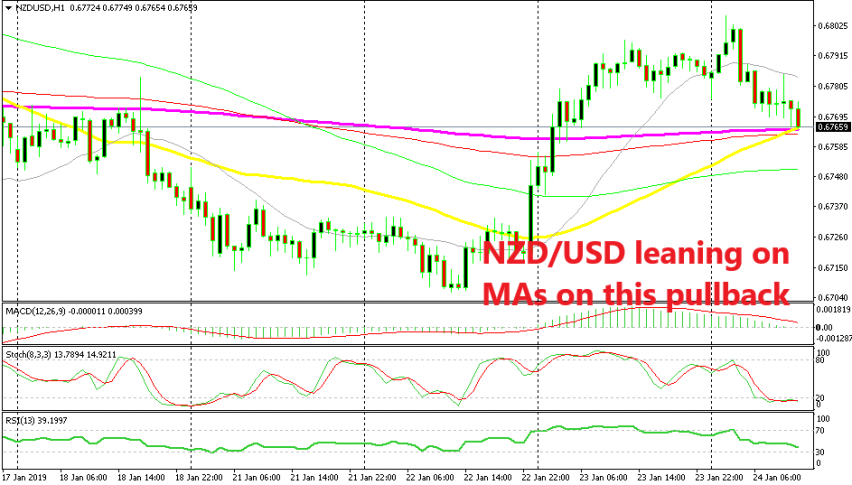 The retrace lower is complete on the H1 chart

Yesterday in the early hours of the morning, the consumer price index (CPI) inflation from New Zealand was expected to fall flat at 0.0% for Q4 2018, but it ticked one point higher, coming at 0.1%. The annualized number was expected to tick lower to 1.8% from 1.9% previously, but remained unchanged at 1.9%, as did core inflation released from the RBNZ which came at 1.7%.

So, there wasn’t much of a change but the market was expecting some weaker figures I assume and the NZD turned bullish, gaining around 100 pips. We missed that opportunity since it happened during the night in the Asian session, and not that we saw it coming, but we are taking this opportunity today to place a trade.

NZD/USD has retraced lower this morning as you can see from the H1 chart above and the retrace seems complete now. The stochastic indicator is well oversold and the moving averages, the 50 SMA (yellow) and the 200 SMA (purple) in particular, are providing support on this time-frame.

If you switch to the H4 chart, you will find the 100 SMA (red) which is providing support to this pair at the moment. Since the trend turned bullish on unchanged inflation figures, we think that going long now would prove to be a good trade. We can’t go long on AUD/USD because the Aussie is crashing lower today, despite the better employment figures, but I will look into that in a minute because that price action seems really strange.