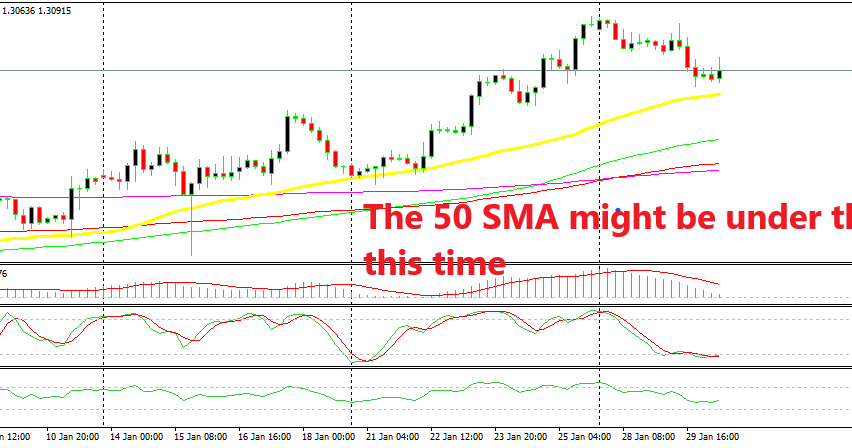 GBP/USD Retraces to the 50 SMA Over Brexit

Yesterday the British Parliament passed some of the Brexit amendments which are supposed to clarify the position of the UK regarding Brexit and show the direction that Britain wants to go in. Although, the EU repeated it yesterday before the vote and again today that they’re not going to renegotiate the deal.

Austrian Prime Minister Sebastian Kurz reiterated this morning that Austria is not ready to renegotiate Brexit, while the Irish Foreign Minister Simon Coveney repeated that Ireland’s position on the backstop is not going to change. So, back to where we were, no matter the amendments.

If anything, these amendments will prolong the Brexit transition period and the uncertainty that surrounds it, which is negative for the British economy. GBP/USD tumbled around 150 pips last evening after the amendments passed.

This pair approached the 50 SMA (yellow) on the H4 timeframe chart. The price bounced 60 pis higher during the night as stochastic became oversold, but then this sort of price action during the European session doesn’t point to this pair resuming the bullish trend. The bounce seems pretty weak.

So, some optimism that surrounded the GBP in the last several weeks might turn into pessimism as the uncertainty continues. We will see from the price action in the coming sessions whether this recent run in the GBP which has been pretty strong will continue or whether the market will turn bearish on the GBP now.

Could The BOE Increase Interest Rates Again in February?
1 week ago