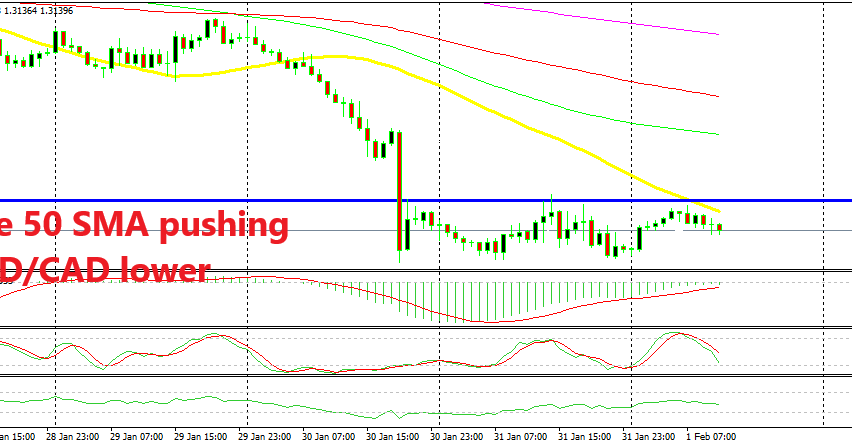 Yesterday we went short on USD/CAD. This pair reversed to bearish early in January as Crude Oil prices made a bullish turnaround last month. USD/CAD completed the first bearish leg in the first week of January, then it retraced higher in the next two weeks and the next bearish leg started last Friday.

On Wednesday evening, the USD lost around 100 pips after the FED sounded less hawkish than in the previous meetings and this pair extended the bearish move lower. Yesterday, USD/CAD was retracing higher on the H1 chart and we decided to get in on this bearish trend after stochastic became overbought.

The price got pretty close to our take profit target late in the evening, but the bears didn’t have enough strength in them to make new lows, thus hitting hit our target. During the Asian session today, this pair retraced higher again but the price didn’t move above yesterday’s highs, which tells us that a resistance level has formed around 1.3160.

Besides that, the 50 SMA (yellow) caught up with the price a while ago. This moving average has been providing resistance to this pair before on the H1 time-frame chart, particularly during that quick decline at the beginning of January. The 50 SMA is already working as resistance today pushing the price lower, so let’s hope that the downtrend resumes again in this pair and we get our pips.

Gold Still Remains the Biggest Beneficiary of Economic Conditions
2 days ago
USD/CAD Remains Bearish, Despite the Jump in USD on Higher US PCE Inflation
The Canadian GDP fell flat in May against a 0.2% decline expected, while the US core PCE inflation increased further last month
1 week ago