What Could Derail the Oil Rally? - Forex News by FX Leaders

What Could Derail the Oil Rally?

Crude Oil made a bearish reversal at the beginning of October. Oil prices had been on a steady bullish trend for more than two years as the recovery of the global economy started picking up pace after being sluggish for years, following the 2008 financial crisis. The bearish reversal was pretty swift and the decline was quite steep during the three-month period from October to the end of December.

Although, in the last week of December, we saw another turnaround, this time to the upside. The signal leading to both reversals was pretty clear, an upside down hammer at the top of the uptrend in early October which is a bearish reversing signal was followed by the steep downtrend. Then, at the end of December, a doji candlestick formed on the weekly chart which is a bullish reversing signal. But Oil faces some bigger challenges ahead which will catch up with it at some point.

The reasons for this bullish reversal were a few. OPEC+ decided to cut production output by 1.2 million barrels per day, the US Dollar went through a period of weakness during the last few weeks, and the sentiment improved in financial markets after the US-China trade negotiations started even as the odds of a no-deal Brexit diminished. Other risk assets such as stock markets have also made a strong bullish run during this time. Although, what accelerated this move was the thin liquidity during the last week of December and the first week of January which was the Christmas holiday period.

Oil will have a difficult time overcoming these two moving averages

But as we mentioned above, Crude Oil faces trouble ahead in the long term. US WTI Crude Oil is already overbought as the stochastic indicator shows. Although, the momentum is still to the upside, so there’s a good chance that the bullish move continues further above. The place where the bullish move might end is the 100 simple MA (green) which stands at $58 at the moment. The other level is the 100 smooth moving average (red). This moving average stands at $60 which is a big round number. That might be a good place to short.

Although, I meant something else when I said that Oil faces trouble ahead. Apart from technical reasons, there are also fundamental reasons. One of the reasons is the raise in shale Oil and gas. Shale Oil extraction has increased in the last decade due to improving technology and the technology is bound to improve further and costs of extraction will fall further. So, the share of shale Oil in the fossil energy market will increase and that will put pressure on the prices.

But there’s more: the renewable energy market share is also increasing. Only last year, investment in the energy market increased by $228.3 billion. With climate concerns, many governments have pledged to increase the renewable energy share. The EU is already on track to meet its Renewable Energy Directive targets of having 20% renewables in the energy mix by 2020 and recently raised the bar by committing to 32% renewables by 2030. 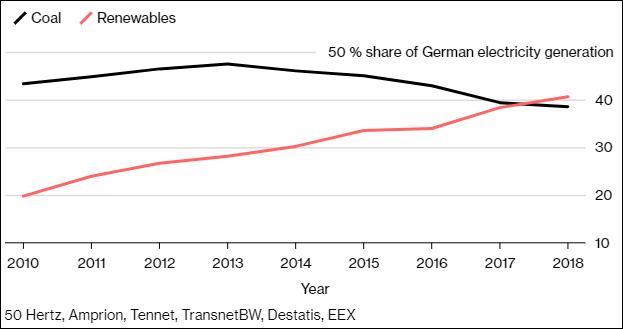 In Germany, the share of renewable energy, which comes mainly from solar and wind, has increased from below 20% in 2010 to above 20% in 2018. The trend is up as you can see from the chart above and it will continue to go up across Europe and Asia in particular. There are plans for massive solar panels in India, South Europe, South America, etc., so the world seems headed towards the direction of renewable energy. Sooner or later the market is going to catch up with this fact and that will be the beginning of the end for Crude Oil as we know. Crude fossil Oil will enter a long term bearish trend until it stabilizes at $10-$20. That might come as soon as 2020 or 2021, so we will be watching.