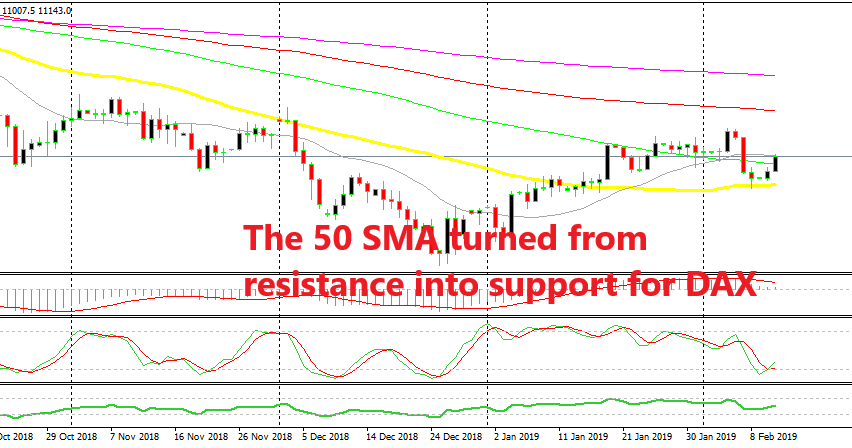 DAX is turning bullish again after the pullback lower

The decline in stock markets has cone to an end after a steep bearish trend in the last few months of last year, at least for the time being. The decline in DAX stopped right at the 200 SMA on the weekly chart, where the bullish reversal began, so don’t ignore these major moving averages because they’re great indicators in providing support and resistance, even more so than the support and resistance levels themselves.

Since the last week of December until the first week of this month, we have seen stock markets turn bullish and claim more than half the losses they suffered during the end of 2018. DAX broke above the 20 SMA (grey), the 50 SMA (yellow) and the 100 SMA (green) without much resistance.

Although, we saw stock markets turn lower at the end of last week and make a retrace lower. That retrace ended right at the 50 SMA on the daily chart though. This moving average was providing resistance on pullbacks last year during that bearish move.

Now, it seems that the 50 SMA has turned from resistance into support. The stochastic indicator became oversold last Friday, so DAX formed a bullish reversal setup on this time-frame chart. Today, the price has moved above the 100 SMA (green) again and it is trying to take over the 20 SMA (grey).

Yesterday we heard some positive comments from Chinese officials regarding trade talks between the US and China, which has improved the market sentiment, hence the bullish reversal in stock markets. If the two giants reach an agreement, then stock markets will likely resume the bullish trend of the last several years, until another headwind comes along, such as US tariffs on European autos. But for now, let the longs enjoy their ride in stocks.